Amazon should stop profiting from Russian-sponsored terrorism in Donbas, Stalin and the Soviet regime 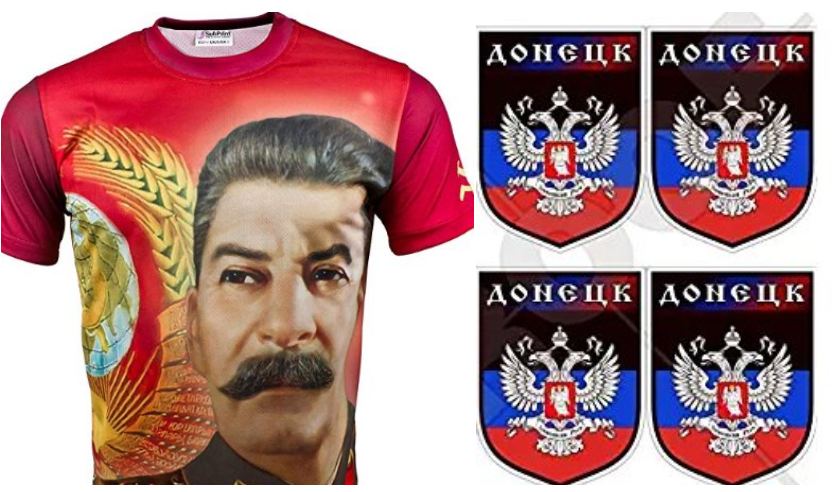 It looks disturbingly as though only money talks for Amazon, even when the money is made by promoting Russian armed, funded and manned pseudo republics waging war in Ukraine, or a regime responsible for genocide and monstrous human rights crimes.

Forget the fact that it was fighters of the so-called ‘Donetsk people’s republic’ [DPR’ who boasted on 17 July 2014 of having downed a ‘Ukrainian plane’ which proved to be Malaysian airliner MH17.  It was those same fighters who plundered the wreckage of the plane and who prevented rescue workers from at least collecting the bodies of the 298 men, women and children they had murdered.  Never mind that the UN’s International Court of Justice is currently considering Ukraine’s suit against Russia over financing of terrorism in eastern Ukraine, and that a Briton is serving a steep prison sentence in the United Kingdom under terrorism charges for his part in the fighting on the side of ‘DPR’.

Amazon will still sell you ‘flags’ and other regalia of this Russian-created and controlled ‘republic’ or of the neighbouring and equally illegitimate ‘Luhansk people’s republic’, with Russian propaganda included in the price.

There was no ‘people’s army’ and the conflict in Donbas is no ‘civil war’.  Attempts in 2014 to stir up a ‘people’s revolt’ ended in squalid failure.  Russia reacted to this failure by first sending in so-called ‘tourists’ – young men of athletic build – to help create such a ‘popular uprising’.  When that also failed, heavily armed mercenaries and ‘Russian World’ fanatics were sent to Donbas, under the leadership of people like Igor Girkin, the allegedly former Russian military intelligence officer who arrived in Donbas after helping Russia carry off its invasion and annexation of Crimea.

You can even buy ‘Soviet Army veteran badges’ which are supposedly worn by ‘LPR / DPR’ fighters and in so doing, “help republics”.

These may all be third party sales, however Amazon charges such third-party merchants subscription, referral, per-item and closing fees for access to its platform.  It is also easy enough to think of organizations that Amazon would not give access to, which then begs the question of why it thinks these Russian-controlled organizations are acceptable.

There is nothing to suggest that these illegal formations require such ‘help’.  Why, indeed, should they, when Russia provides vast amounts of military hardware and ammunition, as well as mercenaries to continue killing Ukrainian soldiers and holding on to power?  There is ample evidence that Russia has brought in military personnel, and even forced Russian conscripts to take part in the fighting in Donbas which Amazon is now helping to promote.  It should be stressed that Russia and these so-called ‘republics’ are using their regalia and propaganda material as a means of recruiting fighters.  This is categorically not something that Amazon should be involved in.

There is no attempt on the Amazon site to explain that these ‘republics’ have not been recognized by any democratic state and that Russia’s direct military interference in Ukraine is well documented and the subject of international condemnation.

Worth noting that Amazon is more restrained when it comes to Nazi regalia.  This may partly be due to the laws existing in some European countries against any attempts to deny the heinous crimes of the Nazi regime.

It may, however, also be linked with the public outcry T-shirts with swastikas, for example, would arouse.  It is frustrating that Soviet symbols, including those that glorify the KGB and its predecessors, do not elicit the same response.

A group of 27 European Parliament deputies, many from countries that suffered terribly under the Soviet regime, have demanded that Amazon remove its deeply offensive Soviet T-shirts, flags, and other regalia.  It is frustrating that it needed to be explained to Walmart and Adidas, and that Amazon has still not understood, that it is unacceptable to flog the symbols of a regime that committed genocide against Ukraine during Holodomor and against the Crimean Tatars in 1944, that murdered millions during the Terror and later. For very many of us whose grandparents and / or other family members were killed during Joseph Stalin’s Terror, it is inconceivable that Amazon should be making a profit out of selling T-shirts with a portrait of the murderous dictator.

There are compelling reasons as to why in many former Soviet or ‘socialist bloc’ countries, both Nazi and Soviet regalia are banned.

It probably doesn’t matter whether Walmart and Adidas understood why their Soviet symbols were unacceptable, or simply recognized that the outcry spelled bad business.  It is imperative that Amazon is made to realize that making a profit from a Soviet regime that killed millions, or from Russia’s undeclared war against Ukraine is totally inadmissible.  It should withdraw all such brands immediately.

Please write to Jeff Bezos and, if possible, tweet, him and Amazon, protesting at its sail of Donbas militant and Soviet regalia.