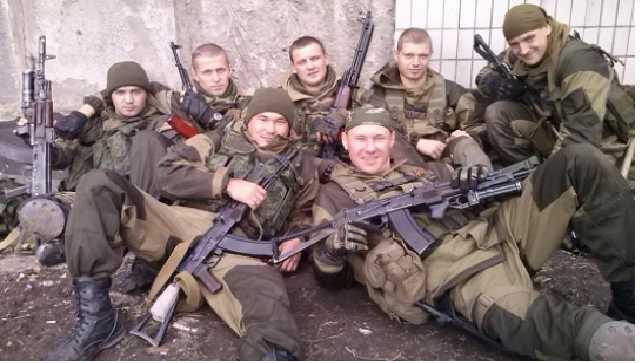 Even the mercenaries that Russia has been using to fight its undeclared war against Ukraine and other conflicts have had enough of being told they don’t exist.  Having failed to gain official acknowledgement from Russia’s leaders, they have decided to establish their existence – and who is organizing their killing activities -  with the International Criminal Court at the Hague.  The evidence they pass to the Office of the Prosecutor will be a useful supplement to all the proof of Russia’s direct involvement in the conflict in Donbas which Ukraine has submitted.

According to Yevgeny Shabaev, the head of a ‘National Officers’ Committee’, he appeal was endorsed by 357 delegates from 52 Russian regions.

Since Russia invaded Crimea in the spring of 2014, with its soldiers bearing no insignia, Russia has tried to deny its direct aggression against Ukraine.  The lie has prompted the hashtag #ихтамнет [#They’reNotThere], so the title chosen by these former fighters and mercenaries, could not be more appropriate: ‘PMC. Death of the army - #We’reNotHere [#НасТутНет].

The authors of the appeal call themselves “citizens of the RF, veterans of the armed forces and military action’, and ask the ICC Prosecutor to “investigate crimes falling under the jurisdiction of the court”.

They go on to say that over the last three years Russian ‘veteran organizations’ have received thousands of complaints from Russians who “served’ in private military and security companies.

While “Russia’s Council of the Federation denies the existence of Russian private military and security companies, the direct participants in these formations are testimony to the contrary”, with “Russia’s interests in the world” being served by a whole range of such companies.

They talk of their participation in the conflict in Donbas; Syria; Libya; the Central African Republic and other countries.

The problem is that they fight as ‘volunteers’ without any official recognition from the Russian state. Shabaev says that they approached President Vladimir Putin’s Administration in July 2018, asking for the PMC to be legalized, but received a response from the Defence Ministry calling such PMC ‘unconstitutional’.

The mercenaries do appear to understand all the reasons why, for Moscow, it is convenient that the men have no legal status.  Their ‘contracts’ are largely meaningless, their link with the state can be denied, and those who open their mouths can end up imprisoned as mercenaries.   While saying in their appeal to ICC that members of the PMC are willing to testify, they refused to speak to a Radio Svoboda correspondent, fearing prosecution.

It remains to be seen what the ICC Prosecutor makes of this highly revealing appeal - application. Certainly the suggestion that the ICC consider such cases of involvement in PMC as ‘enforced disappearances’ does seem rather stretched.

It is also noticeable that the application refers to the last three years.  That would cover the involvement in Syria where large numbers of these mercenaries have been killed.  This may be the reason for shortening the timeframe, given that PMC have been deployed in Ukraine from 2014 onwards. It could also, however, be out of fear of even greater trouble from the Russian authorities.  While the Kremlin is refusing to give status to the PMC, their presence and Russia’s involvement in Syria are not denied.  Russia has persistently tried to claim that the only Russians in Ukraine are ‘volunteers’.

The evidence that Moscow is directly behind the PMC, and that it is deploying them to fight its undeclared war against Ukraine has been mounting over recent years.  Most is known about the so-called ‘Wagner PMC’, though there are a large number of such outfits.

The Wagner PMC, led by Dmitry Utkin (known as ‘Wagner’),  is believed to have taken part in Russia’s invasion and occupation of Crimea, being used, for example, to disarm Ukrainian military bases.  From there they moved to Donbas and became involved in the military conflict on the side of the self-proclaimed ‘Luhansk people’s republic’ [LPR].  Utkin and his men are believed to have carried out several killings of prominent militants, such as Alexander Bednov [Batman], Alexei Mozgovoi, Pavel Dremov and others.

Commentators point to the highly professional level of the fighters, with no locals nor Russians without experience taken on.

The amounts the men earn far exceed any wages that they could earn from ordinary employment or official military service.  They are also many times higher than the monthly pay to other militants.  If killed fighting, the men’s families are supposed to receive a large once-off sum of money.

This is, of course, in exchange for absolutely no guarantees or status, with the threat of being prosecuted as ‘mercenaries’ by their effective employer if they try to rock the boat.

Denis Korotkov, a St. Petersburg journalist, has tracked down two of the men who died fighting in Debaltseve in January 2015.  Their gravestones admit that they died in Donbas, but claim that they were ordinary ‘volunteers’, whereas in fact they were members of the Wagner unit.  Both Korotkov and InformNapalm also provide details of the Russian military honours men have received for fighting in unrecognized military formations on other countries’ territory.

In February 2018, InformNapalm worked together with Internet sleuths from ‘Ихтамнет_м0209’ and the Ukrainian Cyber Alliance to put together information about 26 men in the Wagner PMC.   One of the men was 32-year-old Dmitry Pavlovich Avdiyenko, who was obliging enough to use a social media page to flaunt the military award he received.  This is dated 5 November 2014, but otherwise has nothing to indicate where Avdiyenko demonstrated the alleged ‘bravery’ . He is, however, asked in the comments if it was “for the airport”, and answers yes, probably.  On 24 October 2014, Avdiyenko also posted a video, with the caption: “How our battalion went to take the airport in Luhansk.

Russia is currently taking measures to ensure that no soldiers (and presumably also no PMC fighters) share incriminating evidence on social media. It was, however, the Kremlin itself that spoiled its attempts to deny any links with the Wagner PMC, when it invited Utkin to a Kremlin reception on December 9, 2016 to mark ‘Hero of the Fatherland Day’.  Putin’s press secretary Dmitry Peskov claimed that Utkin was present as a recipient of the Order of Courage and that nothing was known about his military unit.

This stretched plausibility well beyond snapping point since Utkin and his deputy – 54-year-old Andrei Troshev -  were reportedly wearing military honours, including Gold Stars received for the taking of Palmyra in Syria.  Utkin had been spotted by Korotkov, who has suffered constant harassment since he began investigating the Wagner unit’s links to billionaire Yevgeny Prigozhin, often dubbed Putin’s cook.

Prigozhin may be fronting the money for the PMC’s activities, however this individual, who had served a long prison sentence for serious crimes, and then tried selling fast-food on the street, is now a billionaire, so it seems safe to assume that he is paid generously for that role.

Certainly the USA are unconvinced by Russia’s denials.  Last year both Prigozhin and Utkin were placed under US sanctions.

The above-mentioned investigators are convinced that the Kremlin is using the Wagner PMC (as well as others) for its hybrid warfare in Ukraine, Syria and a number of other countries.  While under the guise of a so-called private company, the men are generally ex-Russian military who strictly follow the orders of the Russian commanders.  They get their training on the base of the 10th military intelligence spetsnaz brigade, and, as we see, receive state awards signed personally by President Putin.

Most menacingly, the Wagner unit provided a cover for regular Russian military who were also engaged in the battles for Debaltseve and the Luhansk Airport, and have undertaken other tasks in Donbas.  The Wagner fighters get heavy weaponry and technology directly from Russian Defence Ministry bases, the investigators are convinced, and differ from regular military servicemen only in the wording of their contract and the amount they’re paid. And in the fact that Russia can claim to have nothing to do with them.

Or could.  The huge number of deaths in Syria in February 2018 appear to have made the mercenaries change their position. It remains to be seen whether they continue to take such a stand.  In the first half of November 2018, Vladimir Neelov, a ‘military expert’ who wrote widely on the subject of PMC for pro-Kremlin publications, was arrested in Moscow on ‘state treason’ charges.  Within a day or two, ‘Vzglyad’ had removed all his articles from their site.  It is believed that these were written together with a Wagner PMC fighter and ‘writer’, Oleg Valetsky, known to have fought in Donbas. While the secrecy makes any certainty impossible, it seems likely that Neelov misinterpreted how openly the Russian authorities would tolerate him talking about something it is keeping very secret.  The secrecy is, in large part because the information that PMC fighters possess provides important proof for the International Criminal Court and the UN’s International Court of Justice at the Hague.