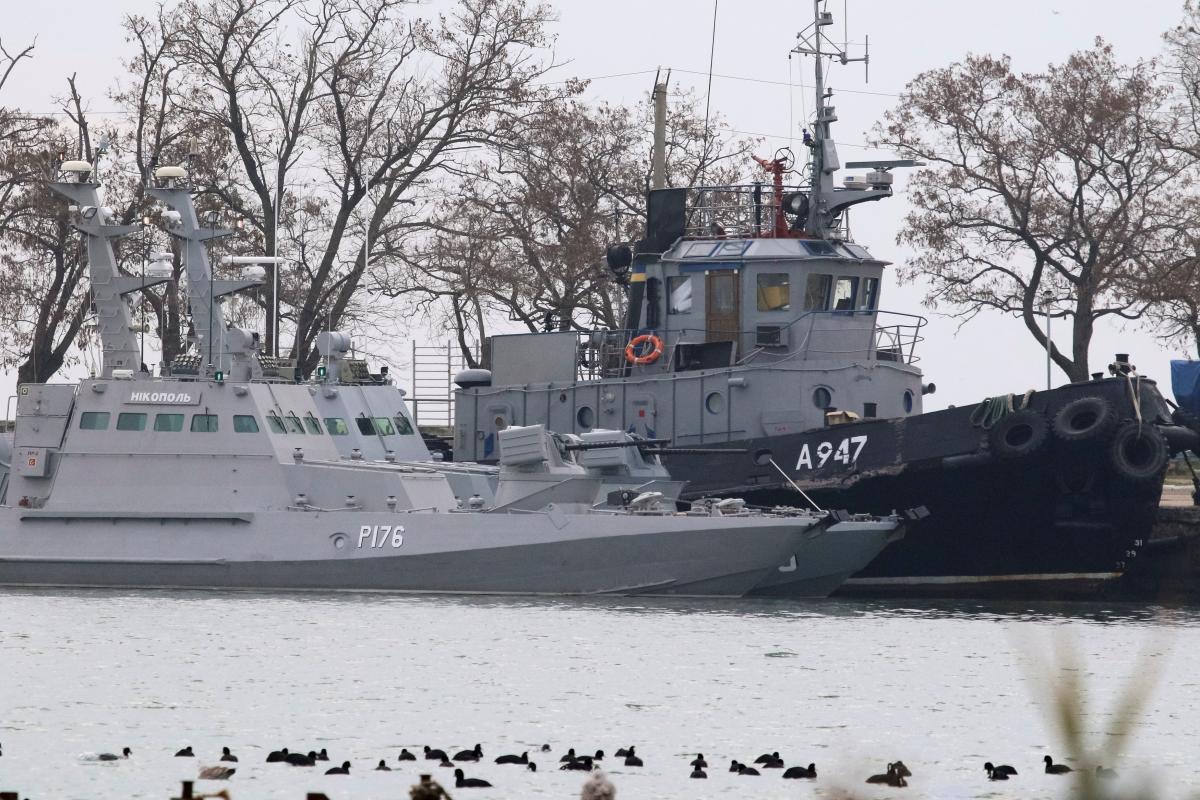 24 Ukrainians taken prisoner on 25 November after Russia attacked and seized three Ukrainian naval boats are to be ‘put on trial’.  At least three of the men are in hospital after Russia opened fire on their vessels, however the others are to be brought to a grotesque imitation of a court hearing in occupied Kerch on Tuesday, with the charges being of ‘illegally crossing Russia’s state border’ (Article 322 § 3 of Russia’s criminal code).  This is despite the fact that they are, in accordance with international law, prisoners of war who cannot be prosecuted, and that all democratic countries have condemned Russia for an act of unwarranted aggression.

The FSB’s imagination is strictly limited, unlike its cynicism, and it has found nothing better than to extract ‘confessions’ from three of the captured Ukrainians that they allegedly entered ‘Russian territorial waters’.  While it is unclear what methods were applied to force such statements, the men are all evidently repeating what they have been ordered to say, and at least one looks as though he has either been physically ill-treated or drugged.  Volodymyr Lisovy, the commander of one of the naval units, had clearly been given a text to read, and he rattles off nonsense about entering Russian territorial waters, and how they were aware that their actions were of a ‘provocative nature’.

As has been the case with most of Russia’s Ukrainian political prisoners since 2014, these FSB ‘confessions’ are widely circulated on Russian state media, which, of course, never report the fact that in the vast majority of cases, the men later retract all such testimony as given under torture.  Nor do they mention the many occasions where the men have been ‘convicted’ of charges that bore little or no relation to their ‘confessions’.

With such media entirely uncritical, credibility is not particularly required, and such ‘confessions’ often parrot the already evident Moscow narrative. In this case, the Kremlin and all Russian state-controlled media began assiduously pushing the line that Russia’s aggression on 25 November was in fact an act of ‘provocation’ by Ukraine with Russia’s ‘response’ to this adequate long before the televised ‘confessions’.

Such claims began within hours of Russia’s firing on three Ukrainian naval boats.  A key theme was that this had been ‘provocation’ by the Ukrainian side, with the support of the USA, in the Kerch Strait, and / or that it was aimed at delaying the coming presidential elections.  The fact that military rule was suggested by President Petro Poroshenko immediately, and has now, in limited form, been imposed, was used to imply that it had all been a deliberate ploy to help Poroshenko whose chances of re-election at present look thin.

Lubov Tsybulska from the Hybrid Warfare Analytical Group reported that one part of the first 24 hours of Kremlin-loyal media coverage focused on claims that Ukraine had not warned of its plans and had not heeded warnings, while a second plugged the ‘provocation’ theme.

None of this can in any way justify Russia’s attack, but it does enable the kind of schizophrenic media reporting in the West which has to report ‘both sides’.  While, on the whole, Moscow’s claims appeared to be for domestic consumption and have been dismissed by western governments, it is disturbing that US President Donald Trump’s rather blurred pronouncements did suggest that there were ‘two parties’ involved, without making it quite clear that one of the parties was the aggressor, the other solely the victim.

The situation could not have been clearer, even if the video footage and intercepted conversations on the Russian side did not make the deliberate nature of the aggression plain.  As over 140 Ukrainian human rights and civic organizations stressed in a joint statement, the United Nations have repeatedly expressed their support for Ukraine’s sovereignty and territorial integrity, and reaffirmed Ukraine’s sovereignty over Russian-occupied Crimea and its part of both the Black Sea and the Azov Sea.  What Russia is called its state border is illegally occupied territory.

Ukraine’s free access to these seas, as well as to the Kerch Strait is not only guaranteed by the bilateral agreement of 2003, but by international law.  Russia’s persistent noise about ‘provocation’ cannot change the fact that it had no right to block the Kerch Strait, nor the passage of any Ukrainian boats.

All of this is emphatically stressed by analysts and by most international structures and democratic countries.  For the moment, however, the words are at the level of expressions of ‘deep concern’ which leave Ukraine dangerously alone to face an aggressor with no respect for international law.