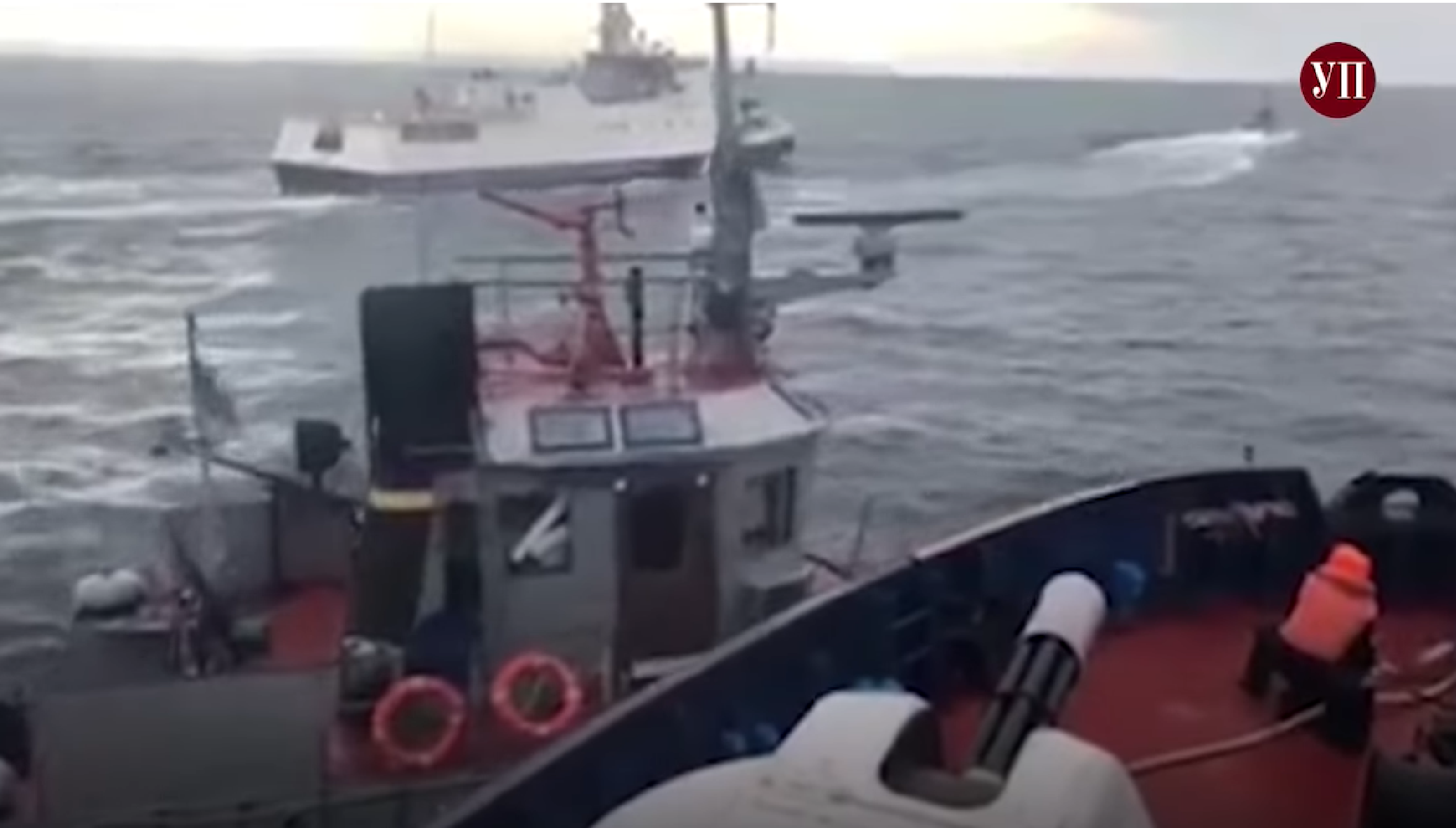 A Bellingcat probe has found that Russia fired on at least one Ukrainian naval boat in neutral waters, and aimed to hit the Ukrainian seamen, not their boats.  It also looks likely that none of this act of war was in any way spontaneous

Russia’s President Vladimir Putin is in a bad position, and needs a fourth war to save him.  This assessment, by Russian political analyst Dmitry Oreshkin, was published on 23 November, just two days before Russian FSB border guards rammed and then opened fire on Ukrainian naval boats in the Azov Sea.  If the link between wars leashed by the Kremlin and Putin’s popularity is easily traced, so too are other indications from the Russian Foreign Ministry and propaganda media that there was nothing spontaneous about Russia’s unconcealed act of aggression against Ukraine on 25 November.

The Hybrid Warfare Analytical Group’s monitoring of Russian media noted that Leonid Kalashnikov, head of the Duma Committee on CIS Eurasian Relations, had already talked of “possible provocation in the Azov Sea by Ukraine” three days before the attack.  Kalashnikov was talking a day after the Foreign Ministry issued a statement expressing “concern over continuing efforts by Ukraine to exacerbate the situation in the Azov Sea.

This would not be the first time that Russia had set the stage in advance for supposed acts of ‘provocation’ or ‘sabotage’ by Ukraine.  At the beginning of August 2016, Russia tried to convince the world that Ukraine had tried to ‘encroach’ upon its own territory, and that Russia’s FSB had captured Ukrainian ‘saboteurs’ working for Ukraine’s Defence Ministry.  One of the multiple problems with this story was that the occupation regime had blocked most Ukrainian Internet channels immediately prior to this alleged Ukrainian ‘incursion’.

Kalashnikov’s ‘prediction’ had not come in a vacuum, since Russia’s attempts to block the Kerch Strait and seize full control of the Azov Sea had begun back in May 2018.   The immediate shouts of ‘provocation’ were also hardly surprising.  It would be difficult to talk of an attack or similar, when it was a Ukrainian naval boat that was rammed, three boats that were fired upon and then seized, with 24 Ukrainian sailors taken prisoner.

It seems likely that the ‘provocation’ was all on the Russian side, hoping that Ukraine would react inadequately, either by itself opening fire, or by later imposing measures that were excessive.  By the evening of 25 November, one of the versions being especially pushed was that Ukrainian President Petro Poroshenko had orchestrated the events to justify martial law and the cancellation of presidential elections he looks likely, at the moment, to lose.

Moscow is still pushing this and related versions, claiming that Ukraine did not warn of the boats’ passage through the Kerch Strait and that it had been shot at while in “Russian territorial waters”.

Even if such claims were true, they would not have warranted Russia’s behaviour and the narrative seems mainly for local consumption.  So too are the angry cries of Russophobia when the rest of the world condemns Russia’s effective act of war and demands that the imprisoned sailors be released.

The assertions are not, in any case, true.  While it may be a matter of whom you believe when it comes to whether Ukraine gave prior warning, other aspects of the events can be geolocated and checked.

Bellingcat has played an invaluable role in the investigation into the downing by a Russian BUK missile of Malaysian airliner MH17 over occupied Crimea on 17 July 2014.  Here too they have carried out an extensive probe of all available video footage, etc. and compared this with the conflicting accounts given of the events.  The believe that the Russian ‘Don’ rammed the Ukrainian towboat ‘Yany Kapu’ twice, and certainly the video released shortly afterwards makes it quite clear that at least one occasion was quite deliberate.

The Ukrainian vessels were later pursued and fired on after they tried to leave the area, having been prevented from passing under the illegal Crimean Bridge.  One particularly disturbing conclusion that Bellingcat reaches (confirming all previous Ukrainian reports) is that the damage to the boats shows that the FSB border guards fired to hit the vessels’ Ukrainian crew, not to cause damage to the ships themselves.

Bellingcat’s investigation found also that the FSB’s own information suggests that the shooting of the Berdyansk, one of the three boats, was indisputably in neutral waters.

It should not be forgotten that none of the Russian claims would justify chasing and firing at Ukrainian boats attempting to leave the area, and then taking their crew prisoner.  The video ‘confessions’ forced out of three men and other information that the captured men have managed to pass on via lawyers make it clear also that Russia is in grave breach of the Geneva Convention in its treatment of the 24 prisoners of war it seized.

In his 23 November article: “Putin’s in a bad situation: he’ll be saved by a fourth war”, Oreshkin noted that Putin had had three surges of popularity – after the war in Chechnya, then the war against Georgia and, finally the war against Ukraine. His popularity is now at 58%, as against 86-87% at the peak of the ‘Crimea is ours’ ["Кримнаш"] euphoria.

“In order to achieve a second wave of popularity, Putin would need to organize yet another small victorious war or campaign”.

Oreshkin, in fact, does not see any option for carrying this off, though he is certainly not alone in assuming that Russia’s open aggression against Ukraine has a great deal to do with Putin’s waning popularity and the mounting economic woes in the country.

James Sherr from the authoritative Chatham House think tank believes that Constantinople’s recognition of autocephalic status for a united Ukrainian Orthodox Church and its independence from the Moscow Patriarchate was a “major geopolitical defeat” for Moscow.  It was no accident that Putin reacted by calling a meeting of the Russian Security Council.  He had, he says, been expecting something like what happened in the Azov Sea since that time.

He also assumes that another reason could have been Putin’s wish to provoke Poroshenko into imposing a harsh form of martial law, with resulting rights restrictions and cancellation of the elections.  Whether this would, as Sherr suggests, have led to another Maidan is probably in question, but it would certainly have been in Russia’s favour.

Most western analysts and politicians are clear that Moscow is seeking to destabilize Ukraine, with this achieved directly by the economic effects of blocking the Azov Sea, as well as other negative consequences if this effective annexing of the Kerch Strait does not meet with real opposition and painful consequences from western countries.

The West has thus far made a lot of statements, but has done little.  In the light of the apparent unwillingness to add new sanctions, Sherr’s suggestion warrants attention. He proposes that the European Union and USA “announce a strict review of all current sanctions over Crimea – determine whether they are adequate, who is affected by them, with what consequences, and what steps are needed to ensure that the sanctions are more effective”.

The Russian politicians and others named in the USA’s first list of sanctions laughed and pretended to be flattered.  While subsequent sanctions hit harder, they are still easily bypassed, as Siemens most shamefully demonstrated in 2017, and are clearly not hurting enough.  Russia has now committed an act of open warfare, and is holding 24 Ukrainian prisoners of war.  If the West continues to wax indignant in words alone, Putin alone will be laughing.