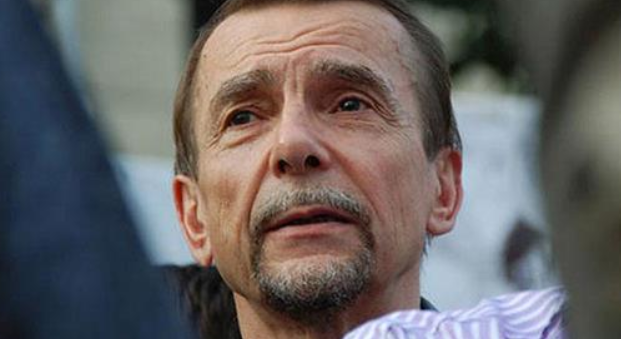 Lev Ponomaryov has been jailed for 25 days for reposting a message about a protest in support of young political prisoners whom Russia is claiming were members of ‘extremist groups’.  This is a dangerous new escalation in repression in Russia and comes soon after the 77-year-old veteran human rights defender and head of the ‘For Human Rights’ NGO warned of systematic attempts to destroy his organization for its defence of the young people arrested in the notorious ‘Novoye velichiye’ and ‘Set’ [or ‘Network’] cases.

Ponomaryov had been presented with the charges on 2 December, although they pertained to a reposted notification of a protest on 28 October.  He was charged under Article 20.2 § 8 of Russia’s code of administrative offences – ‘repeated infringement of the rules for holding public events’.  The alleged ‘infringement’ was that the reposted notification was about a protest that had not received ‘authorization’.  Russia’s Constitution defends freedom of peaceful assembly, however this freedom has been totally eroded since Vladimir Putin first became President, and lack of ‘authorization’ is the normal excuse for prosecuting those taking part in such peaceful protests.  In this case, however, Ponomaryov was prosecuted merely for reposting on Facebook a text which he himself had not written.  The original notification was presented during the hearing at the Tverskoy District Court in Moscow,  with this clearly showing that Ponomaryov had not written it, nor signed it.

All of this, as well as the veteran rights activist’s age, was ignored by judge Dmitry  Gordeyev who has already gained notoriety for similarly political rulings against opposition leader Alexei Navalny.

Ponomaryov has been an active defender of human rights since the 1980s, and has been extremely critical of the Putin regime’s dismantling of fundamental rights.  His organization ‘For Human Rights’ was one of the many prominent NGOs targeted in the move to force all NGOs that received any foreign funding to register as so-called ‘foreign agents’. In March 2015, it was fined for refusing to voluntarily register as a ‘foreign agent’, and was also evicted from its original office. It was finally removed from the ‘foreign agent’ register in late 2015, though this did not stop the ongoing harassment from the authorities.

In November, Ponomaryov reported that ‘For Human Rights’ and the related ‘Defence of Prisoners’ Rights Foundation’ had been denied a presidential grant, which is one of the only forms of funding without being forced to become ‘foreign agents’.

Ponomaryov said then that he was convinced that this was a “conscious attempt to crush the largest civic organization in the country” and revenge for their defence of political prisoners, in particular those arrested over ‘Novoye Velichiye’ and ‘Network’.

It is almost certainly no accident that this belated act of repression against Ponomaryov himself was over a protest entitled “For your children, and ours”, organized by the families of the young people imprisoned.

These two cases are of particular cynicism, and seem aimed at instilling terror in young people who dare to express their views about the political regime in Russia.

10 young people, one of whom, Anya Pavlovich, was underage when arrested, are charged with ‘organizing an extremist organization’ and face long prison sentences.  All of them had been involved in discussions critical of the regime on a Telegram chat site, with the ‘organization’ effectively created by an FSB [security service] infiltrator.  This individual suggested having an office, which he (or, presumably, the FSB) paid for; proposed the idiotic name of (Novoye Velichiye) and designated roles.  All of this was in order to fit the requirements of the norm of the Russian criminal code on organizing an extremist organization (see: FSB infiltrator creates an ‘extremist’ group to jail teenagers critical of the Putin regime in Russia ).

A large number of anti-fascists and anarchists who shared a passion for Airsoft, a game similar to paintball. The FSB claim that they were members of an underground organization called ‘Set’ or ‘Network’ which was supposed to be planning to “stir up the masses” during the presidential elections and World Cup (hosted by Russia in 2018) through explosions.  Three of the imprisoned young men, as well as a fourth who was able to escape to Finland and ask for political asylum, have given harrowing accounts of the torture used to extract ‘confessions’ from them.