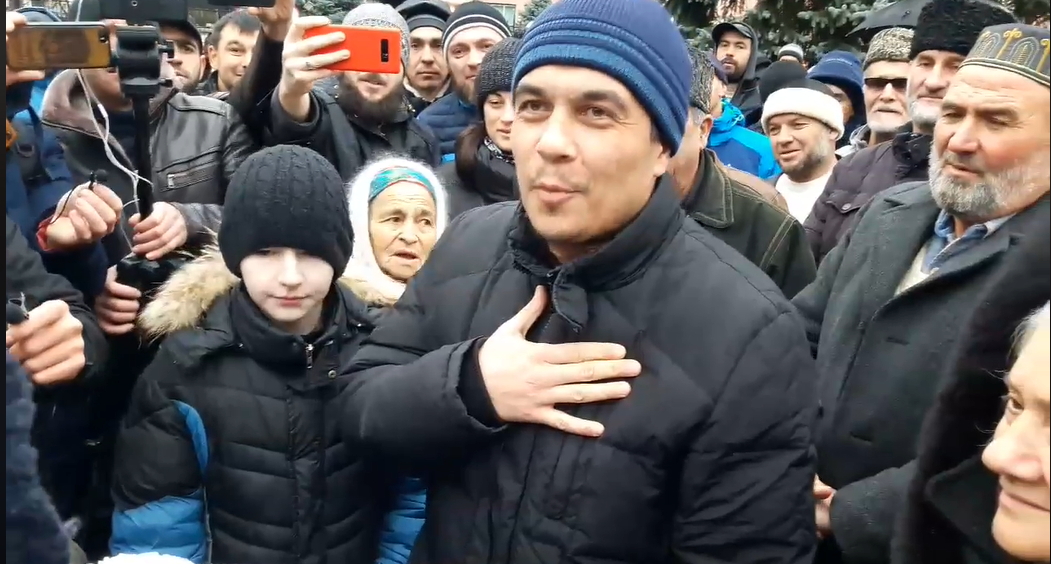 The children, wives and parents of political prisoners were among hundreds of Crimean Tatars who gathered in Simferopol on 11 December to greet Emil Kurbedinov as he was released from custody.  The rights lawyer had been imprisoned for the second time over one pre-annexation social media post, with the latest arrest and five-day sentence part of ongoing pressure on Kurbedinov himself and all lawyers defending victims of persecution in Russian-occupied Crimea.

In an impromptu interview by phone to TV ATR, Kurbedinov said he could not have imagined that so many people would come and that it shows that the work they are doing is not in vain.  He called the Crimean Tatars a unique people who can serve as an example to others.  Amid mounting pressure on lawyers and civic activists in Crimea, Crimean Tatars are become more united, not less.

“Pressure on lawyers, and on all our people, on activists, is continuing, and I do not expect any reduction.  However, just as we have told the truth, so we will continue to speak the truth, we defended people and will continue to do so.  Have they really not understood that their methods make us only stronger?”

Among those who stood closest to Kurbedinov was Bekir Kuku, son of imprisoned human rights activist Emir-Usein Kuku.  He and the other children were among the huge number of Crimean Tatars and other Ukrainians who reacted to Kurbedinov’s arrest on 6 December with banners reading: “You are our people’s defender”.

Mumine Saliyeva, whose husband Seyran Saliev was among six men, most of them Crimean Solidarity activists, arrested  in October 2017, makes it quite clear why the term ‘people’s defender’ is no hyperbole.

Russia’s cynical calculation, that the word ‘terrorism’ would be enough to deflect attention from these cases, has proven depressingly accurate in Russia, and it is to a large measure thanks to Kurbedinov that the same thing has not happened in Crimea.

Almost certainly for political reasons (to give grounds for extraditing Muslims seeking shelter from religious persecution in Uzbekistan), Russia’s Supreme Court declared the peaceful pan-Islamist movement Hizb ut-Tahrir ‘terrorist’ back in 2003.  Since then, there have been mass prosecutions of Muslims on ‘Hizb ut-Tahrir charges’, with these cases normally providing good opportunities for FSB officers to get promotion or other benefits, with very little effort.  No real proof of ‘involvement’ in Hizb ut-Tahrir is even required, as ‘experts’ who know what to say are used, as well as ‘secret witnesses’, with all of this accepted without a murmur by the courts.

Salieva recalls that when the first arrests began in Crimea, Kurbedinov was the first who was not afraid to take on such cases, where others were distrustful, or simply frightened to get involved.  “Many lawyers would  push away the folders on Hizb ut-Tahrir cases, and there was a dearth of information in the media.  However, with time, all the stereotypes, bogies and clichés about ‘terrorism’ and ‘extremism’ in Crimea have begun to crumble. For the public, the media and human rights organizations, it has become clear that the searches and arrests are nothing more than pressure on the Crimean Tatar people under any possible labels.”

It was indeed Kurbedinov who first exposed the truth about such cases, ensuring that it was heard internationally.   “He is one of those who have forced others to believe that to peacefully fight against injustice, without breaking the law in force, is our duty.  He has stirred up the heart of the people , which longs for change and believes in victory.  For that reason, when he himself was gripped by the repressive machine, the people rose in his defence.”

It was Kurbedinov who played a huge role in both defending Crimean Muslims facing Hizb ut-Tahrir charges, and in ensuring that the methods used were known.  He has come under various forms of pressure, including two arrests and periods of administrative arrest.

When detained on 6 December, the so-called ‘centre for countering extremism’ officers took away his phone and computer, on which he has material related to such politically motivated prosecutions.  He stated publicly that he considered the second arrest to be aimed at preventing him defending one of the 24 prisoners of war seized after Russia attacked three Ukrainian naval boats near Crimea on 25 November, as well as prisoners on Hizb ut-Tahrir charges.

Kurbedinov was, in fact, returning home for a matter of hours before heading to Rostov on the Don in Russia where a number of Crimean Tatars are now on trial over Hizb ut-Tahrir charges.  It was learned on 11 December that the Russian prosecutor has demanded a 17-year sentence for Kurbedinov’s client Enver Mamutov, and 10-year sentences for three other Crimean Tatars from Bakhchysarai: Rustem Abiltarov, Zevri Abseitov, and Remzi Memetov.  All four men have already been recognized as political prisoners by the renowned Memorial Human Rights Centre, and their ‘trial’ has been a travesty (see: Fake ‘secret witnesses’ & bizarre ‘evidence’ in Russia’s trial of 4 Crimean Tatar political prisoners ),

This is not the only ‘trial’ now taking place in Rostov of Crimean Muslims who have never committed any crime and who face huge sentences for unproven ‘involvement’ in a peaceful movement which is legal in Ukraine and which is not known to have committed any act of terrorism or violence anywhere in the world.