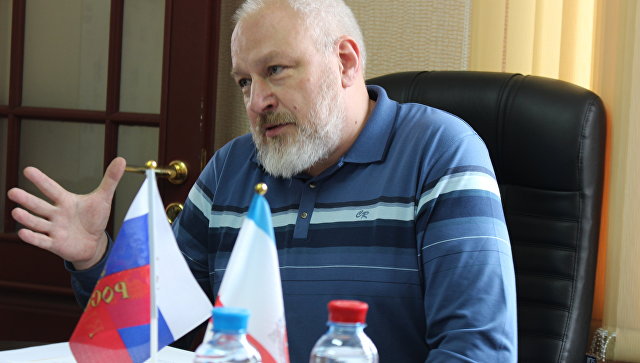 The ‘experts’ whom Russia’s FSB uses for political trials in occupied Crimea are notoriously lacking in any specialist knowledge and / or incompetent.  Andrei Rostislavovich Nikiforov is, however, in a category of his own.  This former Ukrainian citizen, who helped Russia annex Crimea and whose ‘expert assessment’ was recently used to jail lawyer Emil Kurbedinov for an innocuous Facebook post from 2013 has himself used his Facebook account to call for all ‘rabid Ukrainians to be killed, like rabid dogs’, with others needing to “be treated”.

The post was deleted after Leonid Kuzmin, coordinator of the Ukrainian Cultural Centre in Crimea, lodged a formal complaint with the de facto prosecutor.  Two months later, Kuzmin himself was forced to flee Crimea after threats of arrest.  The contents of Nikiforov’s shocking post are still easy to find*, unlike any evidence that the prosecutor did initiate any measures.  There is also nothing to suggest that questions were asked at the ‘Crimean Federal University’ where Nikiforov is an assistant professor in political science and international relations, nor by the ‘centre for countering extremism’ which has sought Nikiforov’s ‘expert’ opinion in a number of cases.

Given that Nikiforov agreed to provide the ‘assessment’ of a photo used to justify Kurbedinov being jailed twice, first for 10 days, then in December 2018 for five days, it is worth considering the two men’s Facebook posts.

Kurbedinov, a renowned lawyer and human rights activist ,was jailed twice for the same pre-annexation post which was merely a report from Hizb ut-Tahrir Ukraine with a photo of a meeting of Hizb ut-Tahrir supporters in Simferopol.  This peaceful pan-Islamist movement was and remains legal in Ukraine and Russia has never provided any adequate grounds for its secretive 2003 ruling which claimed it to be ‘terrorist’.  The photo was simply of a meeting which even Russia must acknowledge was on Ukrainian territory and was entirely innocuous.

The same cannot be said for Nikiforov’s post.   This asserts: “Every person calling him or herself Ukrainian is ill. However not every person has rabies. Some – only scabies. But if this scabies of those pushing Ukrainian identity is not treated, it develops into more serious phases of illness, right up to rabies. Full recovery is possible only in total and final REJECTION of Ukrainian identity. This does not mean that all Ukrainians need to be killed like rabid dogs. Only those with rabies. You can try to treat the others. But with the unrelenting elimination of all those who have, nonetheless, become rabid”.

The difference in treatment has nothing to do with whether posts were deleted.  At least one Crimean Tatar activist has been prosecuted for a seven-year-old reposted video even though he had deleted the VKontakte page it was on.  Remzi Bekirov was jailed for five days more or less at the same time that Nikiforov was posting comments that essentially incite to kill, before deleting them only because a complaint had been lodged.

As well as helping to imprison Kurbedinov twice, Nikiforov has also provided ‘expert assessments’ in prosecutions of other Crimean Tatars.

Russia’s FSB are therefore uninterested not only in Nikiforov’s inflammatory hate speech against Ukrainians, but in his lack of any specialist knowledge of the subject matter (Hizb ut-Tahrir).  It is clearly his pronouncedly pro-Russian ideological stance that is seen as of importance.  In this context, it is worth noting that Nikiforov back in 2015 wrote that “the social base of anti-Russian sentiments exists in Crimea only among Crimean Tatars”.  The persecution of Crimean Tatars by the occupation regime began soon after Russia’s invasion and annexation, with Hizb ut-Tahrir prosecutions increasingly being used against Crimean Tatar activists reporting on rights abuses and supporting political prisoners.

Nikiforov appears to have been a committed adept of ‘Russian world’ and ‘Novorossiya’ ideology long before Russia’s aggression against Ukraine in 2014 made it internationally known. Journalist Anton Naumlyuk reports that back in 1995, Nikiforov gave a lecture entitled ‘Novorossia as the geopolitical core of Russia’s future’.  Two years before Russia’s invasion of Crimea, Nikiforov gave another lecture with the ominous title: ‘Geopolitical cycles and prospects for the Russian world in light of Novorossiya theory’.

Nikiforov, now 56, has also expressed support for Russia’s ban of the Mejlis [self-governing body] of the Crimean Tatar people and for the Russian proxy ‘republics’ in Donbas.

In 2014, Nikiforov received a Russian medal ‘For services to the Fatherland’, clearly for his active support for Russian annexation.

Krym.Realii spoke with Russian lawyer Alexei Ladin, who is representing many Crimean political prisoners and people persecuted for expressing opposition to Russian occupation in posts or reposts on social media.  He notes that there is widespread use of pseudo-experts in criminal and administrative prosecutions in Crimea.

Russian legislation, now applied in occupied Crimea, does not establish set criteria for specialists and experts.  Although the court in principle has the right to assess the competence of such ‘experts’, in practice this is not happening.  Lawyers representing Kurbedinov pointed to Nikiforov’s lack of any experience of Islam and heraldry, yet this was simply ignored by ‘judge’ Anton Tsykurenko.

Ladin says that while such practice continues, no Crimean is safe from such possible arrests and convictions based on similar ‘expert assessments’.  He adds that he had never come upon such frequent use of dodgy assessments as in occupied Crimea.