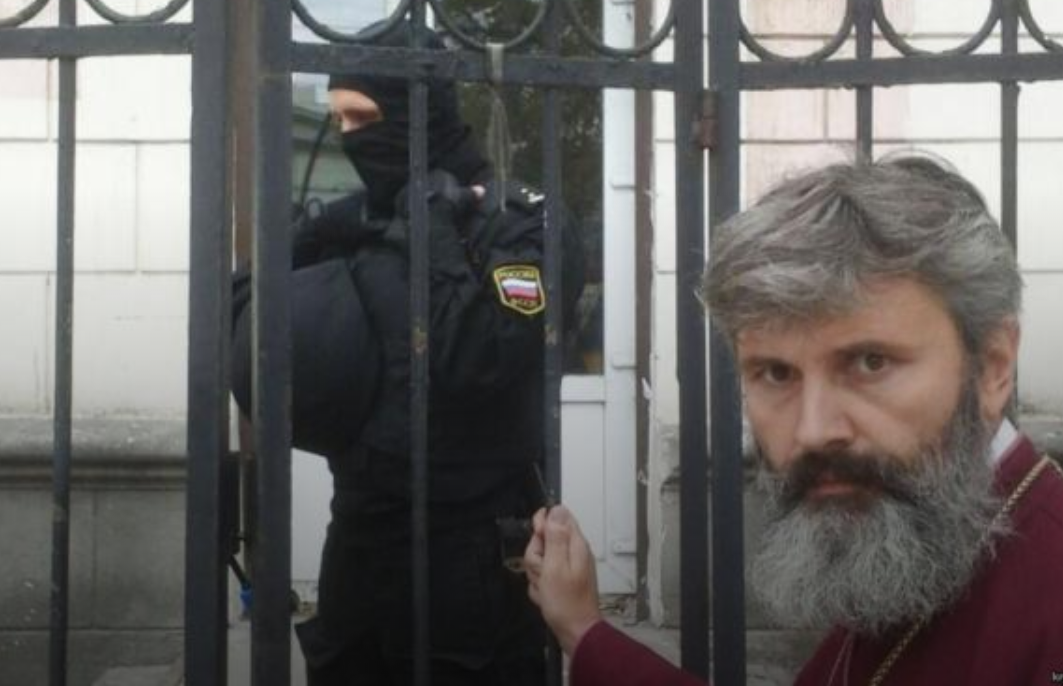 Moscow’s rage at the granting of autocephaly or independent status to a united Ukrainian Orthodox Church is likely to find an outlet in occupied Crimea.  This is the fear expressed by Archbishop Klyment, Head of the Ukrainian Orthodox Church of the Kyiv Patriarchate in Crimea, which has already come under major pressure since Russia’s invasion and annexation of Crimea.

Klyment first spoke of such a danger back in October, noting then that he had been told by Sergei Aksyonov, the de facto Crimean leader installed by Russia, that the occupation regime’s restraint was due to a request from Metropolitan Lazar, head of the Russian Orthodox Church in Crimea.  The latter’s motives were strictly pragmatic, namely the fear that persecution of the Ukrainian Church in Crimea could lead to a backlash against churches of the Moscow Patriarchate in mainland Ukraine.  After Ukraine receives the Tomos of autocephaly on January 6, 2019, there is nothing and nobody, Klyment says, save God, who can restrain the Russian authorities in occupied Crimea.  There may well be even harsher actions against the Church than there have been so far.

Revenge could well be a major motivator since the decision by Ecumenical Patriarch Bartholomew of Constantinople to grant the united Ukrainian Church autocephaly has dealt a major blow to Moscow.  It has seriously dented its narrative about being the heir to a shared ‘Russian world’ heritage dating back to Kyivan Rus, and also its political and economic interests.  Ukraine has a very high number of Orthodox Christians, and the Church under the Moscow Patriarchate wielded considerable power, and also enjoyed economic benefits from its churches and congregations in Ukraine.  It is therefore no accident that Russian President Vladimir Putin’s first reaction to Bartholomew’s decision was to call a meeting of the Russian National Security Council.  The Russian Orthodox Church also reacted by cutting off ties with Constantinople.

Virtually all faiths, except the Russian Orthodox Church, complained of infringements of their rights after Russia’s annexation of Crimea, and Jehovah’s Witnesses, as well as many Muslims whose way of practising their faith differs from that ‘officially’ recognized, are now facing persecution and imprisonment.  It was however the Orthodox Church of the Kyiv Patriarchate that came under particular fire from the outset, with one of the reasons doubtless being its strong pro-Ukrainian position and its public statement t on 11 March 2014 condemning Russian occupation of Crimea.

Russia’s denial that it is occupying Crimea does not change this internationally recognized and condemned fact, and as occupying regime, it is breaching international law by applying its own legislation in Crimea.  This includes the demand that all religious organizations and communities in Crimea re-register under Russian legislation.  The latter is more restrictive that that in Ukraine with respect to believers, imposing far more onerous demands on bodies wishing to function as a legal entity.  One of the requirements is that the religious organization adds words to its association papers that Crimea is part of Russia which many are not prepared to do.  The lack of such registration means that the communities lose the right to use and dispose of their churches, mosques, places of worship or other buildings, and face numerous other restrictions.

Russia is using these restrictions as a form of pressure on religious groups, but also as a method of robbery, especially of property owned by the Kyiv Patriarchate Church.

Other methods have also been used,  including the threat of physical reprisals by the armed paramilitaries, especially in 2014, vulnerability over the  lack of Russian citizenship and also economic intimidation.  There have been threats, for example, against those businesspeople who provided premises for the Church to use, with this a reason why many religious communities have lost their places of worship.

The situation for the Ukrainian Orthodox Church under the Kyiv Patriarchate was difficult in Crimea even before 2014, but it sharply deteriorated under Russian occupation.  In just the first year, 38 out of 46 parishes ceased to exist.  Of 25 priests in 2014, only four now remain in Crimea.  There had been nine until this summer, however five left for mainland Ukraine after a number of searches of the homes of members of the Ukrainian Cultural Centre and after it became clear that the lack of a Russian passport was likely to be used against them.  The remaining clergy try as far as is possible to continue services, sometimes helped by priests who come for one or two days from mainland Ukraine.

In at very least three cases, churches were seized by the occupation regime:  in Sevastopol; Simferopol and in the village of Perevalne. The Church, helped by lawyers from the Ukrainian Helsinki Human Rights Union and the Regional Centre for Human Rights, is currently involved in four legal suits with Russia:  two directly against the Ministry of Defence, although all four appear to be over property that has been illegally appropriated.

On that day Russian enforcement officers and bailiffs forced their way onto the territory of the Cathedral, slightly injuring Kliment and damaging property. They removed a cross, church chalices, rare icons and some items of porcelain and crystal that had been given to the Church, as well as rugs.  No inventory was made of the items.

Archbishop Klyment has long spoken of the important role the Church has played in remaining a place where people come to hear and speak Ukrainian.  He says that the number of believers has not significantly fallen.  While many have left for mainland Ukraine, others, including some who are not ethnic Ukrainians, for whom Ukraine remains their homeland, have begun coming. It became clear from the huge response to a call for donations to help the 24 Ukrainian sailors whom Russia seized on 25 November that there are a lot of people in Crimea who clearly do identify themselves as Ukrainian.