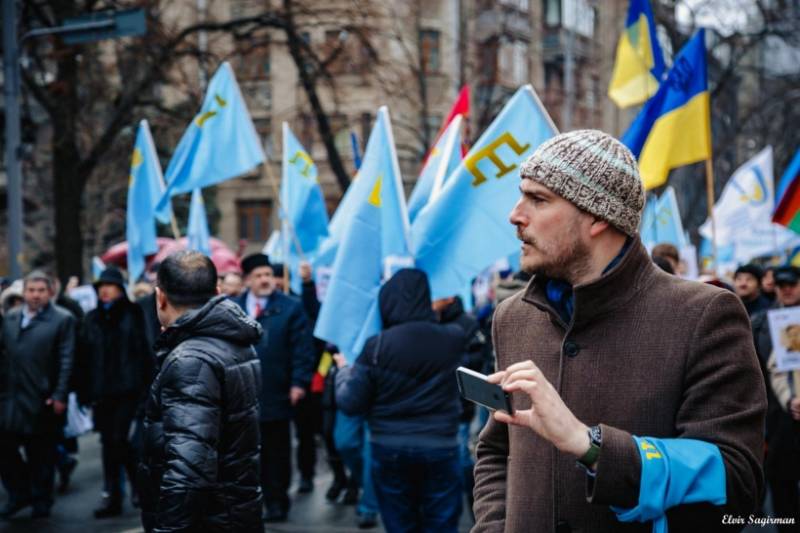 Oliver Loode, an Estonian civic activist who has strongly criticized Russia’s persecution of the Crimean Tatar people and ban on the Crimean Tatar Mejlis [representative assembly], has been banned from Russia until he’s 99.  While it is obviously uncertain whether he will live that long, Loode believes that the main question is about whether the Russian Federation can survive in its present form. “It shows something about the true strength of this supposed superpower”, he writes, that it can find a civic activist and human rights defender like himself a threat.

The document he was handed by border guards, as he was trying to reach a seminar in Russia, does not give a specific explanation for the ban, but it does explain that it has been imposed at the initiative of the FSB [Russian security service] on the basis of Articles 26 and 27 of the Russian Federal Law on Entering and Leaving the RF.  Most of the reasons cited in Article 27 simply do not apply, leaving only the more nebulous grounds in 27.1.  These would suggest that Loode is seen as a threat to Russia’s defence capabilities or national security, as disturbing public order and / or posing a threat to public health.

It is possible that a mistake has been made and that the ban was supposed to be for five rather than 55 years.  On 24 November this year, the FSB issued Ukrainian journalist Alyona Savchuk with a ban for ten years, also purportedly “for the purpose of ensuring the state’s defence capacity or security, or public order”

Similar claims were earlier made about Russia’s ban on veteran Crimean Tatar leader Mustafa Dzhemilev, issued just a month after Russia’s annexation of Dzhemilev’s homeland.  Since then, the Head of the Mejlis, Refat Chubarov and others have also been banned, though in Dzhemilev and Chubarov’s cases, Russia has since come up with surreal criminal charges as well.

It is no accident that Russia’s offensive against the Crimean Tatars began with the very Soviet-style ban on Dzhemilev.  He was just six months old in May 1994 when the entire Crimean Tatar people were deported from Crimea, and he spent 15 years in Soviet labour camps for his peaceful struggle for the rights of the Crimean Tatars to return and for human rights in general.  He was an enemy to the Soviet regime, and to the occupation regime and Russian President Vladimir Putin.

These new bans are also straight out of a Soviet mode.  As reported, Savchuk has played a truly crucial role in reporting on mounting repression in occupied Crimea and on the political prisoners and their families.

Oliver Loode was, until 2016, a member of the UN Permanent Forum on Indigenous Issues, and has long been, as Mejlis member Eskender Bariev put it, an active “friend of the Crimean Tatar people”.

Bariev notes that Loode was one of the co-authors of a Strategy for Crimean Tatar Public Diplomacy from 2016-2020, and he has, since 2018, been one of the leaders of the International Movement for the Liberation of Crimea and Solidarity with the Crimean Tatar People #LiberateCrimea.

Loode spoke out strongly against Russia’s moves to ban the Mejlis, stressing that by criminalizing the self-governing body of the main indigenous people of Crimea, Russia is waging war on the Crimean Tatar people.

The Mejlis was from February 2014 a major force for Ukraine in Crimea, and was unwavering from the outset in its opposition to Russia’s invasion and occupation.  If the initial attacks by the occupation regime were aimed at Mejlis leaders, this changed in September 2014 after the Mejlis again called on Crimeans to boycott Russia’s illegal elections.  It was at this point that the Mejlis was thrown out of their headquarters in Simferopol, and the Crimea Foundation’s property effectively appropriated.

Then in January 2015, Akhtem Chiygoz, the highest-ranking Mejlis leader who had not been banished from his homeland, was arrested on legally nihilistic charges.  He was imprisoned and finally sentenced to eight years before being exchanged on 25 October, 2017, together with Ilmi Umerov, probably for two Russian state-sponsored killers arrested in Turkey.

On November 23, 2017, a gratuitously violent operation was carried out resulting in the death of 83-year-old Vedzhie Kashka, a world-renowned veteran of the Crimean Tatar national movement and the arrest and imprisonment of four respected members of the Crimean Tatar community.  This was an overt attempt, backed by lies from Russian state-controlled media, to discredit the Mejlis (details here).

On 12 December 2018, the FSB border guards seized Crimean Tatar activist Edem Bekirov as he was trying to enter Crimea to visit his elderly mother and he has now been remanded in custody on absurd charges.  58-year-old Bekirov is disabled, has a grave heart condition and diabetes, and there are very real fears for his life in Russian imprisonment.  He is also married to Gulnara Bekirova Alidinova, a member of the Crimean Tatar Mejlis.  Just as with the attempted arrest of Vedzhie Kashka, and the ongoing imprisonment of 65-year-old Asan Chapukh; Kazim Ametov (60); Bekir Degermendzhy (58) and Ruslan Trubach (52), it is clear that Russia is seeking to discredit the Mejlis and respected members of the Crimean Tatar community through fabricated criminal charges.

If the above is depressingly reminiscent of Soviet practices, so too is the use of certain Crimean Tatar organizations willing to collaborate with the occupation regime. These get pulled out for formal occasions as supposed  ‘proof’ that all is well in the occupied peninsula.

Russia had promised to comply with the ruling of the International Court of Justice until that body on 19 April 2019 ordered Russia to stop its extraordinary criminalization of the Mejlis, and other forms of discrimination against Crimean Tatars and ethnic Ukrainians in occupied Crimea (details here).