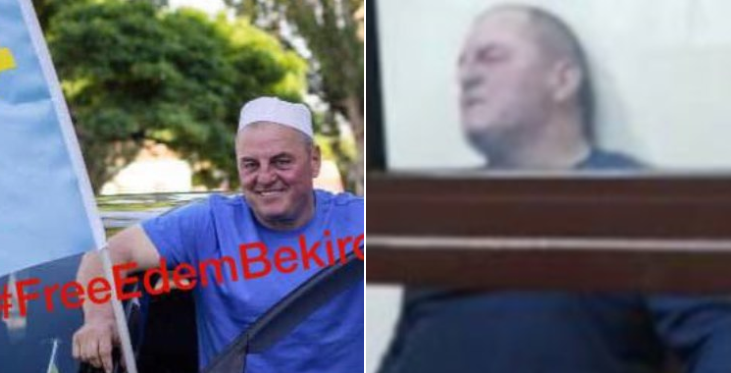 A court in Russian-occupied Crimea has jailed Edem Bekirov for two months despite a heart condition, diabetes and an amputation that make imprisonment a direct threat to his life and the charges against him nonsensical.

The 57-year-old Crimean Tatar activist, who suffered a major heart attack last year and now has four cardiac shunts to regulate blood pressure, is supposed to have transported 14 kilograms of ammunitions and explosives into Crimea.  His lawyer, Alexei Ladin explained in court that his client cannot lift even a 1.5 litre bottle without difficulty.  He would quite simply not be alive now had he tried to drag such a weight.  This was ignored, and on 13 December ’judge’ Valentina Kamynina of the Kievsky District Court in Simferopol remanded Bekirov in custody for two months.  As of 18 December, the prison authorities had not passed critically needed medication to him.

Bekirov has been imprisoned in the Simferopol SIZO [remand prison] where the conditions, even for men in good health, are tantamount to torture.  The SIZO is filthy and overcrowded, with the men having to take turns to sleep on the available bunks. The cells that the men are held in are small, with only slightly more than 2 m² per person, against the sanitary norm of 4 m².

Bekirov was seized by the FSB on 12 December when he tried to cross into Crimea to visit his elderly mother and other relatives. He was held incommunicado until well into the evening, and without food or water until the ‘court hearing’ the following day that ordered his detention for two months.

The FSB accuse him of circulating and transporting more than 10 kilograms of DNT and 190 bullets ((under Article 222 § 2 of Russia’s criminal code).

According to a supposed ‘witness’ (identified only by his last name, ‘Memetov’), Bekirov passed the explosives and bullets – all 14 kilogram worth - to him in May of this year. Memetov purportedly placed them in a secret hiding place around Krasnoperekopsk and then in August revealed this place to the Russian FSB and gave testimony against Bekirov.

As well as being physically impossible for Bekirov to have transported such a heavy load, it would also have been suicidally foolish to try for another reason.  Bekirov is a well-known member of the Crimean Tatar community in Novoaleksiyivka in the Kherson oblast, and his wife is a member of the Crimean Tatar Mejlis, or self-governing body, which Russia banned in 2016.  It was evident that he would be under close surveillance and should expect to be searched at any moment.

Russia was ordered by the UN’s International Court of Justice to withdraw its ban on the Mejlis back in April 2017, and is refusing to comply.  It has instead stepped up attempts to discredit the Mejlis, including the botched arrest, that killed 83-year-old  veteran of the Crimean Tatar national movement Vedzhie Kashka and led to four other older members of the Crimean Tatar community imprisoned on insultingly implausible charges.  On that occasion, efforts to (falsely) link the men with the Mejlis were overt and primitive.  It unfortunately seems likely that the same will be attempted against Edem Bekirov.  If he survives this torture which is anything but certain.