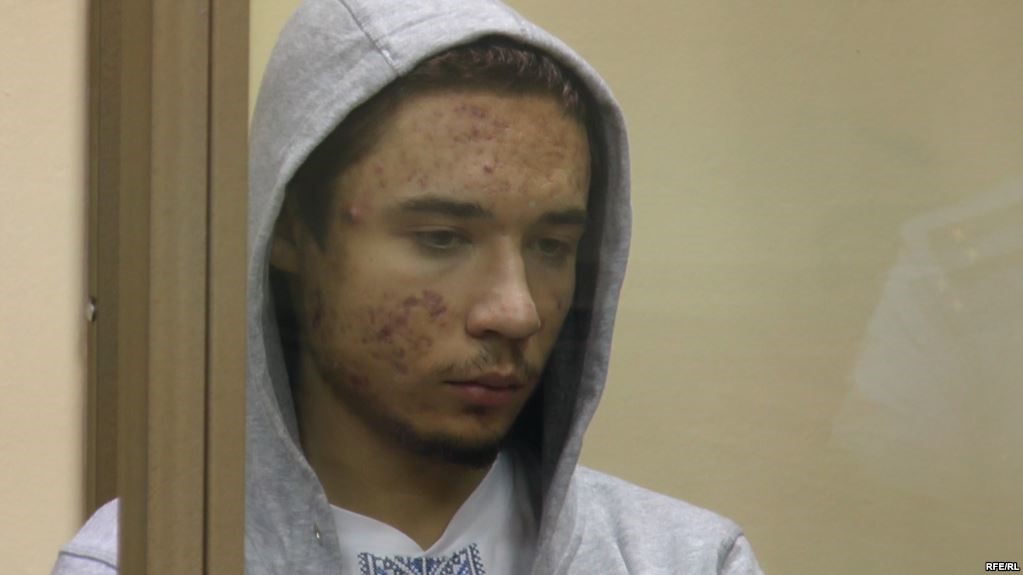 The European Court of Human Rights has given Russia two weeks to provide information about Pavlo Hryb’s state of health and the medical treatment (if any) that he is receiving.  The Court in Strasbourg was asked to intervene after a recent court hearing needed to be adjourned because Hryb was suffering acute stomach pains, and after the medical specialist treating the young man since early childhood warned that the conditions in the prison where he is being held could lead to haemorrhaging endangering his life.

Hryb was just 19 when the Russian FSB abducted him from Belarus and imprisoned him in a SIZO [remand prison] in Krasnodar.  Russia is ignoring the fact that Hryb has a very serious blood circulation issues, including portal hypertension, and needs specialist care and appropriate conditions.  Neither are provided in a Russian SIZO.

Professor Vasyl Prytula from the Bogomolets National Medical University, issued a new opinion, based on the readings taken at a consultative clinic in Rostov (where Hryb is on ‘trial’).  Russia has flouted a previous order from the European Court of Human Rights and has not allowed Prytula or any other Ukrainian doctors to examine the young man.

Prytula’s assessment was deeply worrying.  He found, among other issues, that Hryb’s portal hypertension, hypersplenism, including enlargement of the spleen, are developing, and he is now suffering from liver cirrhosis and reduced ability for blood coagulation (heightening the threat of blood haemorrhages).

He believes it possible that Hryb is suffering from an inflamed ulcer in the colon or stomach.  This can only heighten the danger of haemorrhaging in the digestive tract, stomach or duodenum, with any of these posing “a critical danger to his life”.

Hryb had been complaining of acute stomach pain and nausea before the court hearing on 12 December, but says that the SIZO staff simply gave him a pile of tablets and sent him to the court.  There he said that he was in such pain that he couldn’t possibly register what was going on and an ambulance was called. The paramedic who came said that he could be suffering from enterocolitis, an infection-caused inflammation of the digestive tract.  Or it could be an inflamed ulcer, something which Hryb is vulnerable to. She noted that Hryb had a temperature which indicated some kind of inflammation and said that he must be examined.

Hryb’s Ukrainian lawyer Yevhenia Zakrevska approached the European Court of Human Rights asking them to react within the framework of Rule 39 of the Convention (allowing for urgent measures to be taken). The Court reacted, demanding that Russia provide the above-listed information by 2 January 2019.  Zakrevska pointed out then that the court had scheduled the next hearing for 21 December, and that the paramedic had said that Hryb needed to be examined.  No such examination had then been carried out, and it seems unlikely that it has since. The court on 21 December rejected an application for Hryb to be released from custody.  It should be stressed that Hryb’s physical condition is also seriously impairing his ability to concentrate on what is happening.  Hryb’s lawyer has reported that the young man can virtually not see, and his memory also seems impaired.

It is excellent that ECHR has reacted, but not enough since Russia has already once flouted an order to allow Ukrainian doctors to examine Hryb.  It has instead produced test results which are suspiciously good.  This demonstrates shocking brutality in the case of a young man who has serious health issues which could prove fatal if not provided with proper treatment. There are no medical facilities in Krasnodar capable of treating Hryb should haemorrhaging begin, and Russia is clearly placing the young man’s life in danger.

The Russian FSB seized Hryb in Gomel, Belarus on 24 August 2017, and took him by force to Krasnodar where he was charged with inciting a young Russian girl, Tatyana Yershova, to prepare an explosive device to detonate during a school assembly. This is alleged to have been at the instigation of another Ukrainian, Stefan Kapinos, with whom Hryb shared an account on VKontakte.

Nor did the FSB themselves, despite having supposedly discovered such a plan, do anything.  Yet on July 4, they allegedly launched a criminal investigation, with this involving a search of the young Russian girl’s flat.   By July 28, the FSB had designated Hryb as the ‘accused’ in this story, and they then set about intimidating the young girl into persuading Pavlo to meet her in Belarus, from where he was kidnapped and taken to Russia.  She told Ukrainian journalists then that the FSB had told her that if she didn’t cooperate, they would charge her with terrorism. Unfortunately, for now anyway, she is ‘cooperating’ – at the expense of a young Ukrainian who believed he had found a ‘kindred spirit’.