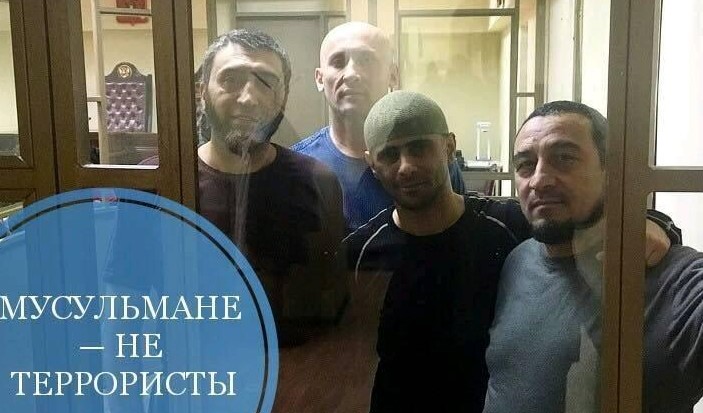 Two days after the UN General Assembly condemned Russia for violations of human rights in Crimea, a Russian court has sentenced four recognized Crimean Tatar political prisoners to terms of imprisonment from 9 to 17 years.

It is already a cynical violation of international law for Russia, as occupying state, to prosecute Crimeans under Russian legislation, especially for unproven involvement in a peaceful organization (Hizb ut-Tahrir) that is legal in Ukraine.  This time the occupiers have gone even further, convicting four men living in their homeland of ‘having planned to violently seize power’, under Article 278 of Russia’s criminal code. The extra charge appears to have been imposed because the men all refused to make the FSB’s job easier and admit to the false charges. There were literally no grounds for any of the charges, with the ‘evidence’ provided by pseudo experts without qualifications, and by secret ‘witnesses’.

This was the second ‘trial’ of Crimean Muslims on ‘Hizb ut-Tahrir charges’, although the first with the extra charge.  It is noticeable that, like with the sentences of four men from Sevastopol, the North Caucuses District Military Court in Rostov clearly understood the travesty of justice they were involved in and handed down sentences lower than those demanded on three men accused of ‘involvement’ in Hizb ut-Tahrir.  Rustem Abiltarov; Zevri Abseitov and Remzi Memetov were ‘found guilty’ of all charges, but sentenced to 9 years, rather than the 10 or 12.5 years that the prosecutor demanded.

The Rostov ‘judges’ (presiding judge Roman Konstaninovich Plisko, Anatoly Vladislavovich Kolesnik and Igor Vladimirovich Kostin) this time did not, however, risk conflict with the FSB and handed down the 17-year sentence demanded for Enver Mamutov, whom the FSB designated the ‘organizer’ of a Hizb ut-Tahrir group under Article 205.5 § 1 of Russia’s criminal code (with ‘involvement’ falling under Article 205.5 § 2). The additional charge of ‘planning to violently seize power’ (Article 278) was the same for all four men.  In all cases, the sentences are for the same maximum security prison colonies that other Ukrainian political prisoners, like Oleg Sentsov and Oleksandr Kolchenko are held in.

‘Evidence’ in such cases, it should be stressed, aims only to ‘prove’ or, at least, make a pretence of proving ‘involvement’ in Hizb ut-Tahrir.  Russia’s prosecution of Muslims on Hizb ut-Tahrir charges is based on a 2003 Supreme Court ruling which claimed, without giving adequate reason, that Hizb ut-Tahrir, a pan-Islamist movement not known to have committed any act of terrorism anywhere in the world should be regarded as a terrorist organization.. It is suspected that the motive behind this move was to provide a pretext for Russia to extradite Muslims who were facing religious persecution in Uzbekistan and had sought refuge in Russia.

The arbitrary and artificial nature of these charges is demonstrated in the fact that sentences have, since 2014, become several times harsher, with this in no way corresponding to different behaviour from the men arrested or from Hizb ut-Tahrir.

Such prosecutions often bring the FSB officers involved promotion or bonuses.  They can claim ‘good’ statistics on supposedly fighting terrorism, without having to worry about real terrorists , They don’t have to do much at all, since the courts generally go along with the prosecution, however shoddy the evidence and implausible the indictment.

In this case, all four men are from Bakhchysarai, and have children, most of whom are quite small.  They were arrested on 12 May 2016, and have been in custody ever  since.

Several months into their imprisonment, a new charge was brought under Article 278, of planning to violently seize power.  In his final address to the North Caucuses District Military Court in Rostov, Mamutov stated clearly that he had been told by the ‘investigator’ that he and the other men would have the new charge added unless he agreed to admit to the other charges.

In general, he said, the SIZO [remand prison] is used as a form of blackmail.  If the person doesn’t do what the investigator wants, he remains in detention. If, however, he signs the papers thrust in front of him, he can be released on a personal undertaking or under house arrest, until the ‘trial’.

In all cases involving Crimean Muslims, Russia has had no success in trying such methods of blackmail, with all the men rejecting the charges and refusing to ‘cooperate’ with the investigators.

The FSB has applied all the methods standardly used against Ukrainian political prisoners, including attempts to either prevent prisoners from seeing real lawyers, or to pressure them into rejecting such lawyers’ services.  Here too, Mamutov made it clear that such methods had been tried, and had failed.  When the FSB investigator, Sergei Makhnev tried to claim that the men’s lawyers had given them bad advice, Mamutov stated bluntly: “The problem is not in our lawyers, but in the fact that the law will not function in your court”.

The prosecutor claimed that the ‘expert assessments’ of illicit recordings proved their involvement.  As mentioned, there is nothing to suggest that the three supposed ‘experts’ are competent to give an expert assessment, and certainly the recordings do not prove involvement.  Mamutov’s lawyer, Emil Kurbedinov explains that on the illicitly-made tape from 13 January 2016, the men can be heard discussing fate and rules for living according to the laws of Islam, for example, how you can earn money and buy property according to these laws.

Mamutov himself was blistering in his criticism of such ‘experts’.

“When Muslims say that you need to work, look after your family, this does not mean to build a world Khalifate and seize power. It means to work, treat people’s teeth or build homes, prepare pilaf and shish kebab.

If people in a conversation use the words “to defend religion”, that means to defend themselves, not to attack.

What kind of mean and low thinking you need to have to interpret defence as attack.“

All witnesses had testified in the men’s favour except for the three so-called ‘secret witnesses’.

“As far as the secret witnesses were concerned, there wasn’t a single reason to hide these witnesses, unless, of course, the investigators, the prosecution and court were not trying to prevent the defence from demonstrating how clearly false their testimony was”.  Mamutov notes that the presiding judge protected these three ‘witnesses’ from questions by the defence aimed solely at proving that they were lying.

As reported earlier, one of these alleged ‘witnesses’, given the pseudonym Pavel Krasnov, claimed that he had been to see Abseitov at the latter’s dentist’s surgery, and that afterwards the two men had gone together to a café where Abseitov had told him that he was involved in Hizb ut-Tahrir.  When questioned, the man gave a completely wrong description of Abseitov’s office.  He was equally unable to describe the café that he claimed the men had visited together.  Another witness, referred to as R. Asanov, was questioned on 25 September.  He gave extremely contradictory statements, but what was most noticeable was what was added in court, and had not been in his original testimony.

He claimed that the participants in the meetings in Mamutov’s garage had spoken of the need to build an Islamic state in Crimea through the deployment of an Islamic army made up of members of Hizb ut-Tahrir.  These allegations were clearly added to back the extra charges which had been laid after the original testimony. n fact,

It was earlier reported that the men believe that this ‘secret witness’ is Konstantin Alexeev,  who had told them that he was hiding from the authorities of one of the Baltic republics and who did not have any legal status in Crimea.  That alone would give Russia’s FSB plenty of leverage for pressure on the man to provide the information they wanted.

It is noticeable that where asked specific questions, these ‘witnesses’ were unable to give any details of illegal actions, and talked only about studying Islamic literature. The prosecutor, in turn, alleged that the defendants had “studied the ideology of Hizb ut-Tahrir together” and had known that Hizb ut-Tahrir was banned in Russia.

In declaring all four men political prisoners, the Memorial Human Rights Centre pointed to the lack of any grounds for ‘terrorism’ charges, as well as to the fact that Russia is an occupying state which has no right to apply its legislation in Crimea.

The letters tell them they are not forgotten, and show Moscow that their actions are being followed. The men will almost certainly be held in the same Rostov SIZO until after the appeal hearing.

Letters need to be in Russian, and on ‘safe’ subjects.  If that is a problem, use the example letter below (copying it by hand, typed letters will also not pass the censor), perhaps adding a picture or photo.