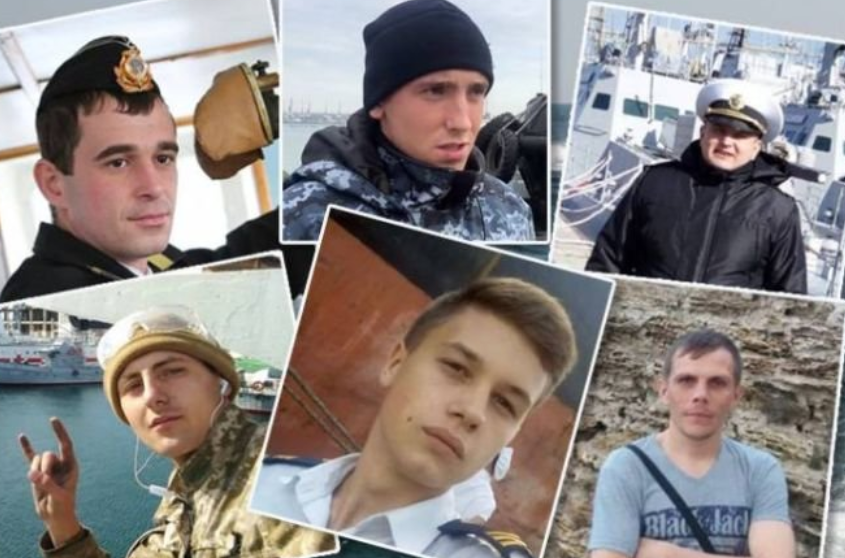 All 24 Ukrainian naval seamen whom Russia took prisoner on 25 November have declared themselves prisoners of war.  Although the men’s POW status, according to international law, was never seriously in question, all have been under immense pressure from the FSB to ‘confess’ to non-existent crimes.  Given the conditions the men are being held in, the fact that all have remained unwavering is a credit to them, and to the team of lawyers, under the coordination of Nikolai Polozov.

Three of the men were seriously injured, and all 24 taken prisoner on 25 November, after Russia blocked access to the Azov Sea, rammed one boat and opened fire on all three Ukrainian vessels.

The international media has already reverted to its customary ‘Russia says / Ukraine says …’ style of reporting, however Russia’s behaviour was immediately condemned far beyond Ukraine as an act of open warfare.  The men’s release has been repeatedly demanded, most recently in a joint statement by Germany’s Chancellor Angela Merkel and France’s Emanuel Macron.

“We demand safe, free and unimpeded transit for all ships through the Kerch Strait and the immediate and unconditional release of all illegally detained Ukrainian seafarers.” .  They went on to express great concern over the “human rights situation in Crimea, which was annexed by Russia in violation of international law, and the use of military force by Russia in the Straits of Kerch and abusive controls in the Sea of ​​Azov”.

Moscow has rejected this call with its standard stream of lies about the status of Crimea, etc.  This is to be expected since such calls have yet to be accompanied by penalties for Russia’s insistence on behaving like pirates and breaching international law.  Without some form of sanctions, unfortunately, Russian President Vladimir Putin is unlikely to release any of the Kremlin’s hostages in the run-up to Ukraine’s presidential elections at the end of March for fear of helping Ukrainian President Petro Poroshenko’s chances of re-election.

Moscow’s efforts to present its aggression on 25 November as Ukrainian ‘provocation’, and the FSB’s standard stunt in using illegal methods to force three of the men into ‘confessing’ on camera, made the need for a serious legal term working in close coordination clear.

Polozov reported on 28 December that their initial task has been completed.

“The fact that all the Ukrainian seamen seized by Russia have identified themselves as POWs demonstrates that Russia’s plans to divide and disorientate the captured seamen have failed.”   This, he explains, will help in the battle to get the men released. 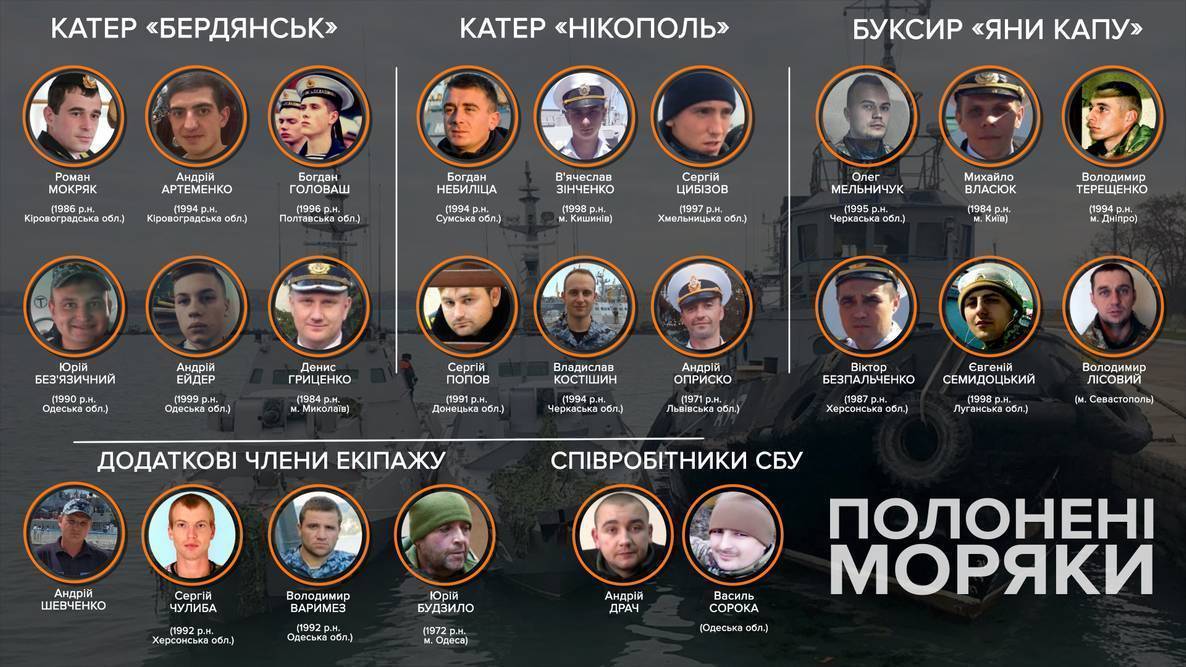 All the POWs  Posted from Censor.net

Russia had initially tried to prevent access to independent lawyers, “pushing their own lawyers, who would have given [the men] questionable advice.  The aim was to get the men to ‘admit guilt’, ‘confess’ to a criminal offence. In that case, there would have been no sense in political negotiations to secret their release nor appeals based on the Third Geneva Convention on treatment of POWs.”

It was particularly important, Polozov says, that the Ukrainian authorities reacted swiftly and mobilized efforts, making it possible to organize a team of lawyers for all the men within two and a half weeks.

This and the fact that the men are united in identifying themselves as POWs will help ensure that their situation is viewed in accordance with international law, and “cut the nonsense” from those European politicians who were loath to admit that it was Russia who violated international law and for the first time in the last five years openly fired at Ukrainian naval boats and took military servicemen prisoner.

Such a position will make it easier to consolidate international cooperation in putting pressure on Moscow.

Russia’s FSB have not, however, given up their attempts to bring pressure to bear on the men.  Polozov indicated on Friday that FSB officers are being sent to hold ‘conversations’, bypassing procedure and therefore ensuring that the men’s lawyers are not present.  The aim of such ‘visits’ is to get the men to admit to having committed an offence or to give testimony against others”.

The lawyers have all explained to the men that such actions by the FSB are illegal and given instructions on what to do. They have also been warned and instructed on how to react if such provocation comes from people sharing their cells.

The lawyers’ team will be making the appropriate demands for information from the SIZO [remand prison] administration and complaints.

One concern is that over the coming New Year and Christmas break, lawyers will not have access to the men who are all held in Moscow.  Polozov believes it possible that the FSB will take this opportunity to intensify pressure on the men.

Russia is continuing to deny that the men are prisoners of war, and has illegally charged them with ‘illegally crossing Russia’s border’. Much has been written about the location of each of the Ukrainian vessels during Russia’s attack.  That may be useful information but in no case would Russia’s behaviour have been anything but an unprovoked act of aggression.  Similarly, the Geneva Convention on the Treatment of Prisoners of War leaves no space for doubt that the naval seamen who were in service are prisoners of war.