Crimean Solidarity rights activist added to Russia’s List of ‘terrorists & extremists’ for a Facebook repostRussia brings criminal charges against Crimean Tatar human rights activist over Facebook repostThey terrorize children in Russian-occupied Crimea & then they come to do it againCharges against Crimean Tatar activist dropped after he was tortured and jailed for six monthsUnexpected end to Russia’s three-year persecution of Crimean Tatar Regional Mejlis Head Crucial judgement for Jehovah’s Witnesses as Russia tries to deny ECHR jurisdiction for its war crimes in Ukraine Not Putin alone. Majority of Russians surveyed have no problem with Russia’s carnage and destruction in Ukraine Russia carries out multiple arrests of Crimean Tatar lawyers representing victims of repression in occupied Crimea Summary of the events that occurred in Kherson city and Kherson oblast during the 90 days of the full-scale Russian-Ukrainian war (February 24 – May 24 2022)Укрзалізниця обіцяє безкоштовні білети російським матерям, що приїдуть забрати тіла синівPutin’s new Russian ‘citizenship’ decree demonstrates plans to annex much more Ukrainian territorySeven Jehovah’s Witnesses put on trial in Russian-occupied Crimea for studying the Bible The cross of Abel and the cross of Cain are different crossesCharred bodies of Russian invaders" torture victims found in Kharkiv oblastRussians bomb tracks but fail to prevent evacuation trains carrying civilians fleeing from Donbas Russian invaders mine children’s playgrounds leaving trail of horrific war crimes Putin miscalculated. Russia is fighting “an army of 40 million Ukrainians” Chief Rabbi of Ukraine demolishes Putin’s excuse for Russia’s invasion Ukrainian Jehovah’s Witness sentenced for talking about the Bible in Russian-occupied CrimeaReport concerning the investigation of the mass unlawful use of force to the convicts of the Oleksiivska correctional colony (No.25) on January 8, 2020
• Topics / Freedom of expression
• Topics / Human Rights Abuses in Russian-occupied Crimea

Russia ‘decriminalizes’ pro-Ukraine social media reposts in occupied Crimea. But only the first 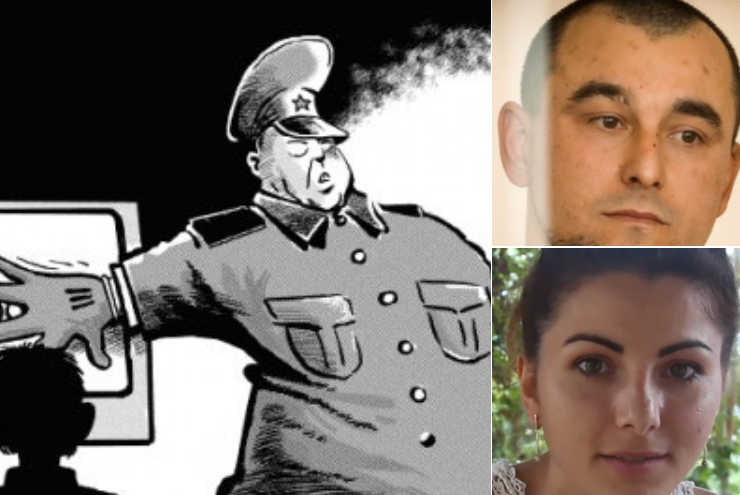 Amendments have been made to one of Russia’s notorious ‘extremism’ charges used in many political prosecutions in Russian-occupied Crimea.  It remains to be seen whether it has a major impact, but in principle it should stop people facing criminal charges and being placed on Russia’s ‘List of Terrorists and Extremists’ for a single reposted text or picture on social media.

The Law on amendments to Article 282 of Russia’s Criminal Code makes so-called ‘actions aimed at inciting enmity or hatred’ initially an administrative, rather than a criminal, offence.  The Code of Administrative Offences will now have a new Article 20.3.1, also on such alleged incitement. Instead of criminal liability, however, a first ‘offence’ will be punishable by a fine from 10 to 20 thousand roubles, up to 100 hours of community work  or up to 15 days imprisonment (‘administrative arrest’).  Such incitement would only be deemed a criminal offence if there was a repeat charge in the space of a year.

The law will change only the severity of the punishment, not the huge scope for abuse of such prosecutions.   A number of cases which either have, or have not, been seen as inciting enmity elicit bemusement.

Russia’s FSB has, for example, failed to find incitement in a video made by Russian fascist ideologue Aleksandr Dugin saying that all Ukrainians should be killed,

There were also no repercussions in March 2016, when the Deputy Speaker of Russia’s State Duma Vladimir Zhirinovsky stated on Russian TV that “terrorist attacks will take place throughout Europe.  And that is in our interests.  Let them all perish and die.  What are you waiting for?  Let’s do it ourselves.”

In February 2016, Ramzan Kadyrov posted a video on Instagram showing opposition leader Mikhail Kasyanov directly under a sniper’s vision.  The chilling message read: “Kasyanov has arrived in Strasbourg for money for the Russian opposition.  Who hasn’t understood, will understand”.  The video was later removed, but due to Instagram’s standards, not because of any fear of prosecution.

The occupation regime in Crimea is just as specific in what it deems incitement.  This does not include the pronouncements on Facebook and similar from Andrei Nikiforov, whose lack of specialist knowledge is no impediment to his providing ‘expert assessments’ in political trial.  Nikiforov’s post which called for all “rabid Ukrainians” to be killed was only removed after a formal complaint from a Ukrainian activist, and there is nothing to suggest that the prosecutor took any measures at all.

The tolerance towards the above and other examples of incitement is in marked contrast to other cases where Crimean Tatars or other Ukrainians in occupied Crimea have been charged under Article 282, including several who have already been convicted.

Emil Minasov was sentenced in July 2017 to one year and three months’ imprisonment for supposed ‘incitement to enmity’ on Facebook, with the posts and reposts having been critical of Russia’s annexation of Crimea.

Larisa Kitaiska was convicted on 26 December 2017 of ‘incitement’ in connection with supposedly ‘Russophobic’ posts on Facebook, and given a two-year suspended sentence.  The 55-year-old businesswoman and former Maidan activist had left Crimea after Russia’s invasion and had been living in Kyiv where she never concealed her opposition to Russian occupation. She was detained by the FSB on July 18, 2016, with a search carried out of her home in Yalta.  Although not held in custody, she was forced to sign an undertaking not to leave Yalta.

There are several cases now underway on charges under Article 282.

Ismail Ramazanov was brutally beaten up and then held in custody for six months, charged under Article 282 of ‘incitement’ to enmity against Russians over supposedly ‘extremist’ comments on the Zello Internet radio which is banned in Russia.

Elina Mamedova is also presently facing the same criminal charges of ‘incitement’ over three social media reposts from 2014 and 2015 from a pro-Ukrainian VKontakte page.

Mamedova points out that “people kill, knock people down at pedestrian crossings and get acquitted”, and here she could get five years for a repost. She rejects the charge of inciting hatred towards Russians, and stresses that her reposts were “against those people who came onto the territory of my country – Ukraine, with weapons, and with the help of murder and violence, imposed their order here”.

Gulsum Alieva, 21-year-old Crimean Solidarity activist and the daughter of recognized political prisoner Muslim Aliev, is facing criminal charges under Article 282 over a text that purports to be a quote from the Russian philosopher Ivan Ilyin, whom Putin is known to have praised.  The words about Russia in the supposed quote are already unflattering, however at the top and bottom, in a different colour  are the words “Russia is a country of moral monsters” and (at the bottom) ‘Death to Russian occupiers!”  This was simply a reposted text, with Alieva adding no comment from herself.

Oleksandr Sedov from the Crimean Human Rights Group believes that a review could be sought in the above two cases and others, still under  of the convictions, given the change in the qualification of a first-time ‘incitement’ charge.

It is certainly to be hoped that this will be the case.  The difference in criminal prosecution is not only the severity of the sentence but also the fact that people who have not been convicted of any crime are still placed on Russia’s notorious List of Terrorists and Extremists, with this bringing serious restrictions on, for example, their ability to access their own bank account(s).

The problem is, however, that other similar charges can, and have been brought in analogous cases, and these have not changed.  Yevhen Karakashev, for example, is facing charges not only under Article 282 § 1, but also under 205.2 § 2 (public calls to terrorism), although the latter charge seems as dubious as the accusation of ‘incitement’.  He has been imprisoned since February 1, 2018 and has been recognized as a political prisoner by the Memorial Human Rights Centre.

Another Ukrainian activist persecuted for expressing his pro-Ukrainian position on social media, is Ihor Movenko who received a two-year suspended sentence (initially a real sentence, but reduced at appeal level).  In his case, this may well have been in reprisal for his attempts to get the police officer who savagely attacked him prosecuted.  The point here, however, is that the charge was under “public calls to extremist activities” which remains unchanged by the new law.

Given the will to persecute activists and others refusing to be cowered into silence, this law while, undoubtedly, welcome, may be of limited effect.