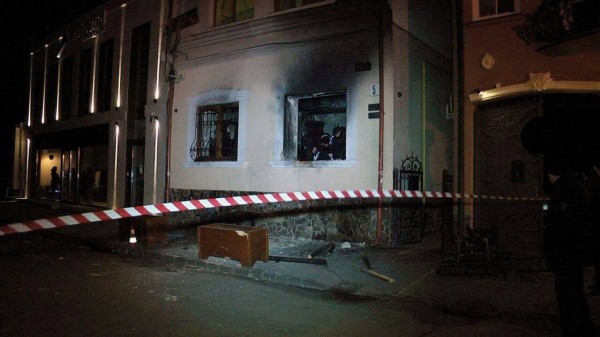 Three Poles from far-right radical groups are facing terrorism charges in Poland over an arson attack on a Hungarian Cultural Centre in Ukraine.  Poland’s Security Service [ABW] believes that the men received orders to carry out the attack from a German journalist who was probably working for the Russian FSB.  It would not be the first time that Russia has been caught trying to incite inter-ethnic enmity in Ukraine, though it is most unusual for stunts to have such an international character.

The charges pertain to an incident on 4 February 2018, when a  Molotov cocktail was hurled into the building housing the Society of Hungarian Culture in Uzhhorod, causing serious damage to the ground floor.

It was Zakarpattia Governor, Hennadi Moskal, who first stated that two Polish citizens were suspected of having carried out the attack.  He identified them as 22-year-old Adrian Marglewski and 25-year-old Tomasz Szymkowiak (later Polish reports only give initials for the men’s surnames) and said that they were both members of the far-right (and pro-Russian) Falanga party.  Members of the latter, he added, have fought in Donbas on the side of the so-called ‘Donetsk and Luhansk people’s republics’.

The two Poles were alleged to have arrived in Ukraine from Slovakia and stayed in a hostel in Uzhhorod.  They were suspected of having twice attempted to set fire to the building – at around 1 a.m. on 4 February, then three hours later.  For their second attempt, they bought petrol at a local petrol station, with their actions recorded by CCTV footage.

Ukraine’s SBU [security service] sought assistance from their Polish counterparts and on 27 February, the Polish Press Agency that three men had been arrested, with two of them remanded in custody over the attack . The ABW spokesperson stated then that they were following various lines of investigation, including probing the suspects’ international contacts.

On 5 January 2019, TVP.info that the indictments in the men’s cases have been passed to the court.  The charges are not specified, but are said to pertain to crimes of a terrorist nature.   The two men accused of carrying out the attack are believed to have been paid one thousand złoty (around 240 euros) each,

The report cites an unnamed ABW officer who appears to have been involved in the investigation or at least be familiar with it.  He calls the attack provocation designed to cause a worsening in Ukrainian-Hungarian relations.  This, he says, suits Russia “which is interested in destabilization of its western neighbour where a hybrid war is continuing in Donbas.  Hiring Polish thugs was useful for Russia since if the culprits bungled it, there would be the possibility of exacerbating relations between Poles and Ukrainians which are already not the best”.

The chief suspect, 28-year-old Michał P, is believed to have links both with Falanga and the Zmiana Party, a very aggressively pro-Russian party formed in 2015.  One of its founders is Mateusz Piskorski, whom Russia has long used for providing fake ‘observers’ to rubberstamp its pseudo-referendum in Crimea, equally illegitimate electoral stunts in Donbas and elsewhere.  The ABW officer mentioned that Piskorski, who was arrested in 2015, “is to answer before the court for collaboration with the Chinese and Russian security services”.

Michał P. is accused of having, in January and February 2018, out of mercenary motives, been commissioned to carry out illegal actions in Ukraine intended to incite inter-ethnic enmity between citizens of Ukraine and Hungary, to disrupt the system in Ukraine, and deepen divides between Ukrainians and Hungarians.  He is believed to have given the two other men money to carry out the arson attack, having found people willing to take on the task from among members of far-right groups, including Falanga. It was he who instructed Adrian M. to daub a swastika on the targeted building in Uzhhorod as well as the neo-Nazi code 88 (camouflage for ‘Heil Hitler’), with this aimed at compromising ‘Ukrainian Bandera-supporters’,

The two men he recruited messed up the first attempt and do not appear to have understood that they were being filmed both outside the Hungarian Cultural Centre and at the petrol station.  Since Marglewski had obligingly taken the hostel room in his own name, it was extremely easy to identify them both.  When detained, Marglewski promptly admitted to everything, enabling the ABW to swiftly arrest the other two men.

There are 150 thousand Ukrainian Hungarians in the Zakarpattia oblast.  There has recently been enormous tension over Ukraine’s new language law which Hungary believes infringes the rights of the Hungarian minority, a large percentage of whom scarcely know Ukrainian at all.

If the tension over the language issue is real, the same cannot be said of numerous other attempts over recent years to either stir up enmity between ethnic groups in Zakarpattia or to exaggerate inter-ethnic tensions.

It has also been standard, since Euromaidan, for fakes which present Ukrainians as anti-Semites or Nazi supporters.  It has been very cheering to see how united most Jewish organizations, as well as those of other ethnic minorities, have been in publicly debunking such attempts.

There is enormous irony in the fact that such efforts, as well as moves to support Russia’s annexation of Crimea and its proxy ‘republics’ in Donbas, usually come from members of far-right and / or neo-Nazi parties.  Piskorski and his Zmiana party were by no means alone in this.  Although the ABW officer did not name the “German journalist” who is believed to have commissioned the arson attack, probably for the Russian security service, one name that inevitably springs to mind is Manuel Ochsenreiter.  He is editor of Zuerst, a German neo-Nazi newspaper and a frequent guest on the Kremlin-funded English-language channel Russia Today.  Interpreter  that on one such occasion he defended Russia’s annexation of Crimea, claiming that only Crimean Tatars in the pay of the EU oppose Russian rule, and that the Russian soldiers and their guns were needed to protect democracy from pro-Nazi Ukrainian nationalists.  Ochsenreiter has taken part in Moscow-paid ‘observer’ trips together with Piskorski, as well as a Russian-based project where a rather motley bunch of far-right and other pro-Russian politicians declared their concern about supposed ‘political prisoners in Ukraine’.   to be in with others in Falanga and Zmiana as well.

It must be noted that local media reported after a second attack on the Hungarian Cultural Centre on 27 February 2018 that new buildings appeared to have been bought before either of the attacks.  Whether or not this is suspicious can be disputed, but it must have been known by the Polish Security Service, and has not stopped them finding sufficient evidence to charge three Poles with terrorism, and to, at least unofficially, suggest that the smoking gun leads to Russia.