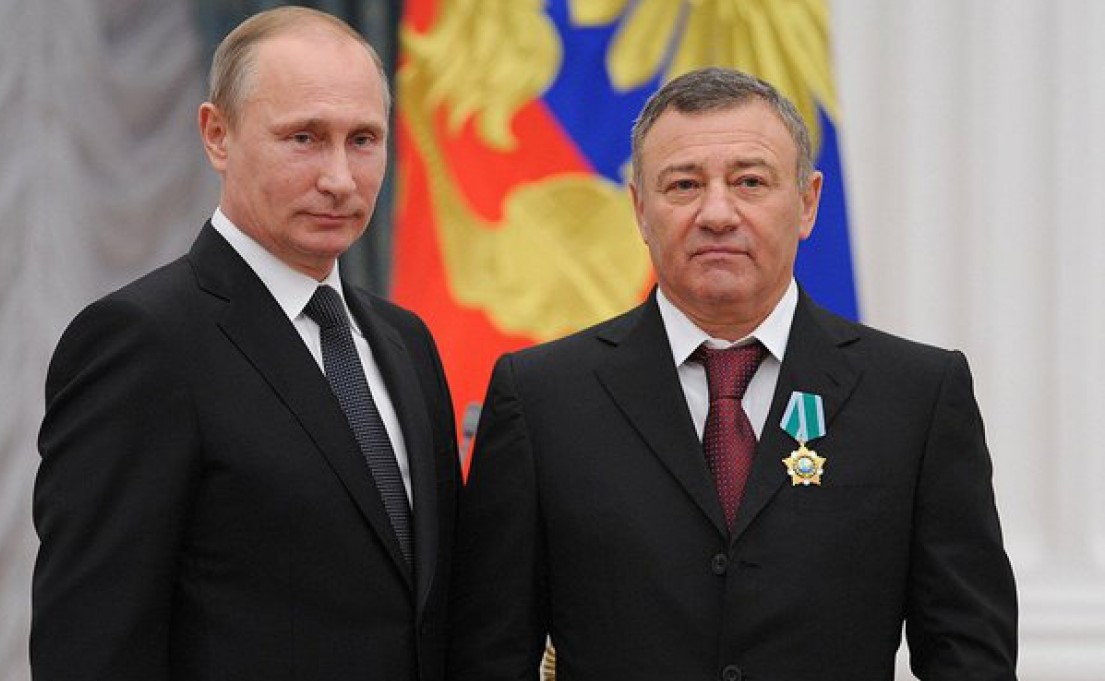 A business owned by Russian oligarch Arkadiy Rotenberg has ‘won a tender’ worth 46 million roubles for holding ‘anti-corruption measures’ in 20 regions of Russia.  The amount is, of course,modest in comparison with the billions that the close friend of Russian President Vladimir Putin has raked in from other lucrative state orders over recent years.

With Rotenberg’s ties, he probably doesn’t need to take bribes, but the notion of his company being employed to “held the Civic Chamber of the Russian Federation fight bribe-taking’ has provoked cynical mirth from commentators.

The government order states that the company ‘Granat’ will help the Civic Chamber hold 135 events as part of a program entitled ‘Development of the institutions of civic society, public control and countering corruption’. Rotenberg’s company will teach people how to fight bribe-taking by holding a number of roundtables and public hearings in 20 regions.

Rotenberg, and his brother Boris, have done well – to the tune of many billions -  out of Rotenberg’s childhood membership of the same judo club as Putin and their continuing friendship.

Both brothers were placed under EU and US Treasury sanctions on 20 March 2014, in reaction to Russia’s invasion and annexation of Crimea.  The US Treasury statement called the brothers “members of the inner circle” and specified that “Arkady Rotenberg and Boris Rotenberg have provided support to Putin’s pet projects by receiving and executing high price contracts for the Sochi Olympic Games and state-controlled Gazprom.  They have made billions of dollars in contracts for Gazprom and the Sochi Winter Olympics awarded to them by Putin.  Both brothers have amassed enormous amounts of wealth during the years of Putin’s rule in Russia.  The Rotenberg brothers received approximately $7 billion in contracts for the Sochi Olympic Games and their personal wealth has increased by $2.5 billion in the last two years alone.”

One of Arkady Rotenberg’s moves to avoid the sanctions was to transfer a huge part of his business to his son, Igor.  The latter was finally placed under US sanctions in April 2018.  Another method, according to a study carried out by Municipal Scanner, has been to send a network of ‘emissaries’ – trusted former top managers - to other European countries to work for him, without being hit by sanctions.

Rotenberg was also the main contractor for the bridge which Russia illegally built across the Kerch Strait to link occupied Crimea with Russia.  Although it has been suggested that this may not have been a money spinner for the oligarch, the costs keep on rising exponentially, and it seems extremely unlikely that he lost money.

There were also huge irregularities.  Russia’s State Duma passed legislation which effectively bypassed environmental impact analyses and public  hearings in order to fast-track construction of the bridge which Putin had claimed was a ‘historic mission’ and was prepared to spend vast amounts of money on.  The new laws made it possible for the construction to commence while permits were still being processed, making any such permits quite meaningless from the point of view of safety and proper standards.

Russian law was essentially rewritten in the same way that it had been to accelerate construction for the Sochi Olympics, with the same disregard for safety and the likely consequences for the area.  With respect to the Kerch Strait, this is an area of seismic activity and experts have long warned of the dangers of building any 19-kilometre bridge, let alone one that was built bypassing vital safety procedure.  Russian construction engineer Yury Sevenard  said in August 2016 that the area was unsuitable because of the geology, seismic activity, and extreme weather conditions. And in December 2016, Yury Medovar from Russia’s Academy of Sciences said that the bridge is being built without a proper design, since nobody wants to take responsibility for it. The bridge cannot be built, he said, and God help us if it is, since it can’t last.

The cowboy methods used in Sochi have already led to disastrous flooding and other consequences, and there have already been rumours of problems with the bridge. Although it is, for now, still standing.

None of this has been a problem for Rotenberg who remains in Putin’s closest circle and picks up billions in state tenders every year.  Even those on ‘fighting corruption’.