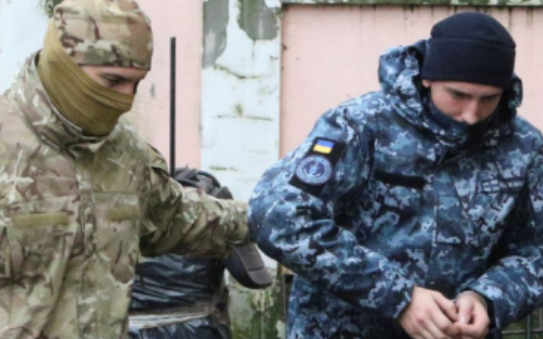 If Russia has nothing to hide in its ‘prosecution’ of 24 Ukrainian POWs, why is the FSB asking for their detention court hearings to be held behind closed doors?  Even in Russia, court hearings are open unless state secrets or similar are involved.  It is no state secret that Russia violated international law, both through its attack on and seizure of three Ukrainian naval boats on 25 November 2018 and the taking of 24 Ukrainians prisoner.  Russia does, however, have an interest in minimizing media and diplomatic attention to its holding of Ukrainian POWs, and this is clearly the reason for trying to block access to court hearings.  This was probably also the motive for Russian Human Rights Ombudswoman Tatyana Moskalkova suddenly having to ‘make an urgent trip’ and cancelling a planned meeting with her Ukrainian counterpart, Lyudmila Denisova.

Nikolai Polozov, who is coordinator the group of lawyers representing the 24 POWs, reported on Monday that the FSB investigative department will be applying to the court on 15 January for the hearings to be held behind closed doors.  The position of the defence team, he stressed, is that there must be open and transparent court hearings, with the media and representatives of foreign diplomatic missions free to attend, as well, of course, as Ukraine’s Human Rights Ombudsperson and any of the men’s family.

Polozov noted separately that “the Russian authorities are well aware of the illegal nature of their actions with respect to the Ukrainian POW seamen and also the ongoing violation of the Third Geneva Convention.   The attempt at secrecy and Moskalkova’s sudden departure from Moscow are clearly aimed at trying to avoid further political fallout.  They will not work, Polozov stresses.  “The political price of holding the POWs is already too high for Russia, and will only increase.”

Aside from the three men who were wounded when Russia opened fire on their vessel, the other POWs were first brought before a ‘court’ in occupied Crimea on the days following their seizure.  As well as trying to claim that Russia’s attack constituted Ukrainian ‘provocation’, Russia brought charges of ‘illegally crossing Russia’s state border’ (Article 322 § 3 of Russia’s criminal code).  There may be grounds for suspecting that the attack, in one form or another, was planned in advance.

Russia had lodged an unprovoked attack, by first ramming one of the three boats, then by opening fire at and seizing the vessels and their crew.  This would be a gross breach of international maritime law, even had the vessels been in so-called Russian territorial waters.  They were not. Bellingcat investigators have used Russia’s own data to demonstrate that ‘Berdyansk’ was in international waters when it came under fire.  Russia is also trying to claim that the water around occupied Crimea is ‘Russian’ which it is not, nor can the Azov Sea be blocked to Ukrainian vessels according to a bilateral agreement between Ukraine and Russia.

Faced with international condemnation of Russian aggression and unlawful seizure of 24 men, Russia’s FSB turned to its customary methods and forced three of the imprisoned men to provide ‘confessions’ to having ‘illegally entered Russian territorial waters’.

This nonsense failed to convince anybody and the men were swiftly removed to Moscow, where they were put under pressure to agree to state-appointed ‘lawyers’.  Polozov has since reported that the men have been under relentless pressure ever since, with FSB officers turning up for unscheduled ‘visits’ with the men’s lawyers not being able to attend.

Fortunately Ukraine has acted swiftly in this situation, and a team of lawyers has worked out a common position, with each lawyer guiding his or her client on likely forms of pressure and manipulation from the FSB, prison administration or even planted ‘cellmates’.

All of the men have declared that they are prisoners of war. One of the first to do so was the Commander of the Berdyansk, Roman Mokyak who demanded that the ‘investigators’ treat him and his men as prisoners of war and refused to give any testimony to the Russian authorities until they released his men. They had simply been  carrying out his orders, he stressed, and it was he, as commander, who answers for what happened on board his vessel.

Russia is denying that the men are POWs, claiming that they cannot be POWs since Russia and Ukraine are not formally at war. This is a curious argument after Russia attacked Ukrainian vessels, however it is also invalid for other reasons. According to the Geneva Convention on the Treatment of Prisoners of War, if military or naval servicemen were in service, wearing uniforms and insignia, and were seized as the result of an act of aggression, they are unquestionably prisoners of war.

As POWs, their treatment is regulated by the Geneva Convention on POWs and it is effectively a war crime to be treating them as though suspects of ordinary criminal prosecutions.  The ‘detention hearings’ on 15 January, which will almost certainly extend their imprisonment, are a flagrant violation of international law.