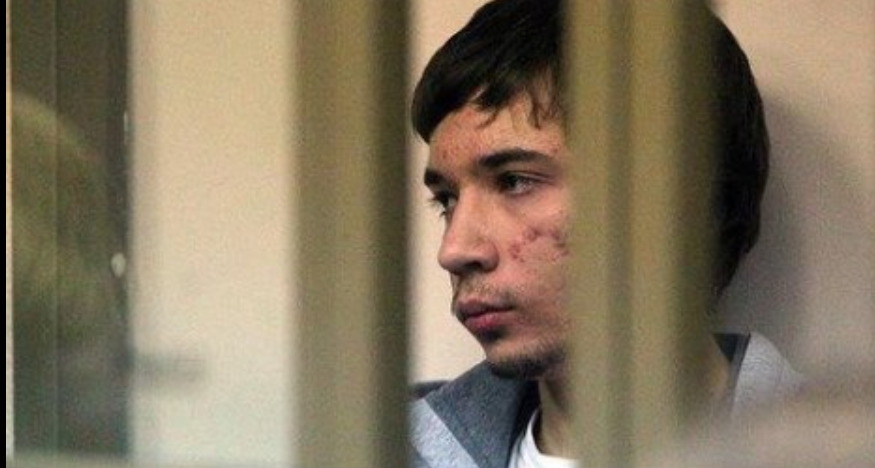 Pavlo Hryb was just 19 when he was abducted by the FSB from Belarus after going there, he thought, to meet a young woman he had met, and fallen in love with, on the Internet.  On 18 January, the now 20-year-old told a Russian court that he believes the person he met in Belarus, who is the prosecution’s ‘key witness’, to be an FSB set up, and not the young woman he originally corresponded with. He also gave disturbing details of the violence he was subjected to following his abduction to force a ‘confession’ from him..

Hryb has been imprisoned in Russia since his abduction on 24 August 2017.  The FSB claim that he encouraged Tatyana Yershova, then a 17-year-old schoolgirl from Sochi, to plant a self-made explosive device in a school on June 30, 2017.  He is supposed to have suggested this by Skype between March 27 and April 13, 2017.

In fact, there is only a ‘translation’ of this alleged text from Ukrainian into Russian, and no screenshot of the original.  This is, in itself, highly suspicious, and Hryb noted also during the hearing on 18 January that the translation is of extremely bad quality.

Hryb explains that he had first become acquainted with a friend of Yershova’s on  VKontakte in January 2017, and that she had introduced him to Yershova.  With both girls he wrote in Ukrainian.

Yershova had suggested moving over to Skype at the end of February.  Since Hryb didn’t want to register on Skype he used the account of Stefan Kapinos, a young Ukrainian whom he had also met on the Internet.  As reported, INTERPOL has, quite incredibly, issued a Red Notice to other countries that Kapinos is wanted by Russia, despite very serious grounds for concern about the nature of this ‘case’ and about the effective lack of any chance of a fair trial.

In his statement to the court, Hryb also stressed that he had not discussed Ukrainian nationalism with Yershova, as the prosecution has asserted.  The indictment claims that Hryb is a supporter of the Ukrainian National Assembly – Ukrainian People’s Self-Defence which Russia has declared an ‘extremist’ organization. According to the prosecution’s version, Yershova is supposed to have spoken of her hatred “of all Russians who don’t share the ideas of Ukrainian nationalism and who support the current Russian regime”.

Hryb now believes that from June to August 2017, it was the FSB who were communicating with him, using Yershova’s account. This was with the aim of tricking him into going to Belarus.  He said that he had received a message from Yershova’s account saying that the FSB would let her go abroad after she met with him in Gomel (Belarus) and asking him to send his photo. Hryb is now convinced that the person he met in Belarus, who has since appeared in court for the prosecution, is not, in fact, Yershova.

Yershova, or at least a person claiming to be her, contacted Ukrainian media after it became clear that Hryb had been abducted, and then later spoke with Pavel Kanygin from Novaya Gazeta.  On both occasions she did suggest that they had discussed nationalism, but also made it very clear that she had been threatened by the FSB with the same terrorism charges unless she ‘cooperated’ with them.  She claimed that she had not known he would be abducted, that she had told Hryb everything and that they had still decided to meet.  This does correspond with Hryb’s words in court, though it remains unclear when the real Yershova disappeared from the scene.

During the court hearing on 18 January, Hryb explained that he had been set upon by five individuals in Gomel and pushed into a mini-van.  He was taken to a forest and dumped there, in order to then be taken to a security service building by police van.  He says they used force against him, and took his documents and ticket away.

Hryb rejected the claim made in the court that he had been detained in the Smolensk oblast (Russia) and said that the officers who appeared in court were not the ones who had seized him in Belarus. In the forest, he says, he was kicked and dealt about 10 blows to the stomach, then at the security service building he also received a couple of blows and was threatened with torture.  The official time of detention was given only after the officers had forced a ‘formal confession’ out of him.  All that time, he was kept chained to a wall unit or 32-kilogram weight.  Hryb says he would be able to recognize his tormenters.

Answering questions from his lawyer, Marina Dubrovina, Hryb said that he had been given nothing to eat or drink, and had been told that he would be held there for another week unless he “confessed to it all”.

Prosecutor Alexei Khanenya read out the ‘testimony’ where Hryb had supposedly confirmed that he had discussed instructions with Yershova for producing nitroglycerine.  Hryb stated clearly to the court that he had signed this document under duress.  He denies having sent any information about nitroglycerine and repeated to the court that he had not incited Yershova to prepare a bomb.  Yershova had wanted to do something, he said, but not create an explosion, but some act of petty hooliganism.  He added that he had not approved of nor supported such intentions.

This is not the first time that Russia has abducted a Ukrainian and then claimed that they were ‘detained’ in Russia.  It is unfortunately impossible that the FSB abducted the then teenager to Krasnodar in Russia without the Belarusian authorities’ knowledge. Even if documents have been falsified to hide the abduction, Hryb’s father sounded the alarm as soon as his son failed to return on the coach from Gomel.

The court has paid no heed to Hryb’s allegations or to the shocking discrepancies in this case.  During the hearing, it was also handed a document claiming that no impediments had been found, with respect to Hryb’s medical condition, for him taking part in the hearing. Hryb told the court that the so-called ‘examination’ had consisted of two doctors looking him over and a blood test.

Russia is ignoring the clear danger to Hryb’s health or life despite the strongest of warnings from the doctor who has treated the young man since childhood for a serious blood circulation condition.  It has also reacted to the European Court of Human Rights’ demand for information about Hryb’s state of health and the medical treatment (if any) that he is receiving by effectively lying and refusing to allow Ukrainian doctors to examine him. The Court in Strasbourg was asked for a second time to intervene after a recent court hearing needed to be adjourned because Hryb was suffering acute stomach pains, and after the medical specialist treating the young man since early childhood warned that the conditions in the prison where he is being held could lead to haemorrhaging endangering his life (details here).