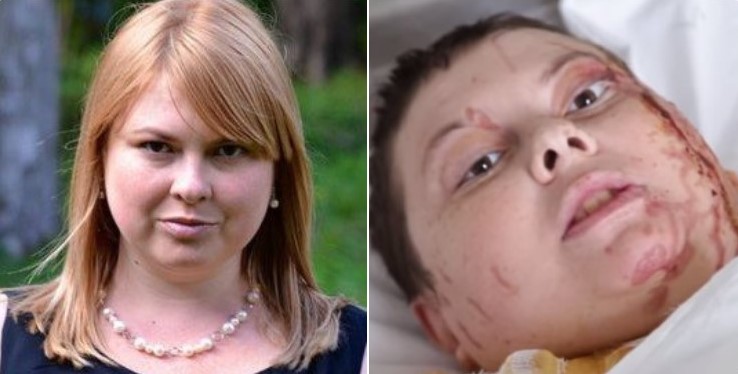 The suspected organizer of the savage killing in Kherson of Ukrainian civic activist Kateryna (Katya) Handziuk has been placed on the wanted list many months after baffling delay by the enforcement bodies enabled him to flee the country.  The fact that he is still only on the national wanted list, and not Interpol, is only one of the reasons why friends and colleagues are sceptical about this apparent ‘progress’ in the investigation.

Ukraine’s Prosecutor General Yuri Lutsenko announced on 4 December 2018, exactly a month after Handziuk died in hospital as a result of the injuries sustained in the acid attack on 31 July, that Oleksiy Levin (Moskalenko) was under suspicion. During the same press briefing, and even more emphatically in an ICTV interview, he asserted that the investigators, while still gathering evidence, basically knew who ordered the attack on Handziuk.

Yevhenia Zakrevska, the lawyer representing Handziuk’s family, was scathing about Lutsenko’s outpourings that day, saying that he was harming the investigation by divulging details. She was also openly critical of the fact that Levin had only now been formally declared a suspect, saying that his likely involvement had become clear after the arrests of the first believed perpetrators of the attack.  Why had he not been seized then before he managed to go into hiding?

It was only after she and activists involved in the initiative «Хто замовив Катю Гандзюк?» [Who commissioned the attack on Katya Handziuk?] reported on 15 January that Levin had still not been placed on the wanted list, that this finally happened.  This, however, is unlikely to help if Levin is, indeed, abroad.  Shortly after Lutsenko’s announcement, MP and former journalist Mustafa Nayyem reported that that Levin was not just a member of an organized criminal gang, who had served a long sentence for a series of killings, but was also an aide to Mykola Stavytsky, a deputy of the Kherson Regional Council who, according to Nayyem, is close to the Head of the Council, Vladislav Manhera.  Nayyem pointed out that it was impossible to believe that a person like Levin would himself have taken the decision to kill Handziuk who was an aide to the Mayor of Kherson.  It becomes even more impossible, he suggested, if you remember that “by same incredible coincidence the member of a gang of killers was not among the first suspects in the case and somehow managed to hide from the law enforcement bodies several days after the murder”.

Nayyem asserts that Levin was frequently in the office of Ihor Pavlovsky, an aide to MP Mykola Palamarchuk, who was arrested on 6 November, in connection with Handziuk’s murder.  Civic activists probing the case believe that Pavlovsky could have been the go-between, who handed over the money to those who carried out the attack.

Handziuk was not only an adviser to Kherson’s Mayor, but a well-known civic activist who was particularly, although not exclusively, critical of the Kherson police.  She was attacked outside the entrance to her apartment block, with eh assailant hurling a litre of the acid used in car batteries at her.  She received burns to around 35% of her body and needed to be airlifted to a hospital in Kyiv where she underwent 11 operations.  She was just 33 when she died.

Despite this move, all developments came from the Kherson Regional Police and Zakrevska positively accused the police of deliberate procrastination in providing vital material to the SBU, thus seriously hampering the latter’s investigation.  The case was really only handed over to the SBU after Handziuk’s death.

Five men were then arrested, with four remanded in custody and one placed under house arrest. All are suspected of involvement in the attack, with one man – Mykita Hrabchuk – suspected of the attack itself.  He is reported to have traces of burns from his exposure to the acid on his body.

All of the men had fought together in the ‘Ukrainian Volunteer Army’ 5th Division, with the man suspected of offering money for the attack being their former commander. Zakrevska has rejected any attempts to find ideological motives in the men’s alleged involvement.  She believes that the only motive was financial gain.

Almost two months after Lutsenko’s brash assurances, there is still no evidence that the investigators are any closer to establishing who commissioned a savage crime clearly aimed at silencing a courageous activist committing to fighting corruption and working for a better Ukraine.