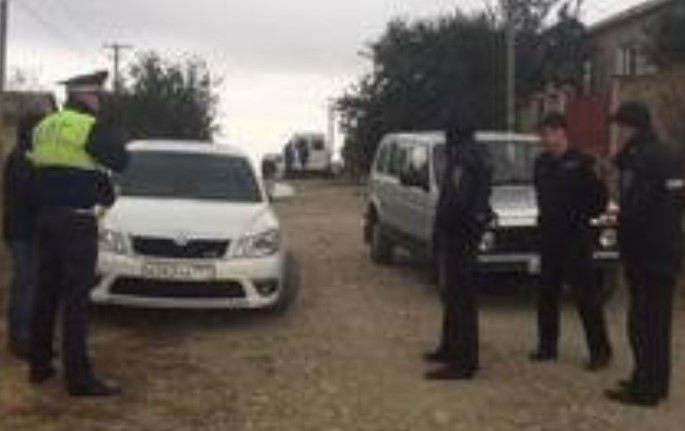 A court in Russian-occupied Crimea  on 22 January 2019  convicted four men of involvement in a peaceful movement which is totally legal in Ukraine, but which Russia has decided to label ‘extremist’. This was the first ‘trial’ of Ukrainian Muslims accused of involvement in Tablighi Jamaat, and was also marked by open pressure on the men to reject independent lawyers and to ‘admit guilt’. Russia is overtly persecuting Muslims for their religious beliefs, while also in breach of international law, since, as occupying state, it is not allowed to impose its legislation.  This, however, it has been ignoring for almost five years.

In all such cases, the FSB designates one person the ‘organizer’, with the others facing the less serious charge of ‘involvement’.  49-year-old Rinat Suleymanov was charged under Article 282.2  §  1 of Russia’s criminal code with organizing the activities of an organization, religious association, etc. found by a Russian court to be ‘extremist’.  He was sentenced to four years’ imprisonment, followed by a further year’s restrictions.  He has already been imprisoned in the intolerable conditions of the Simferopol SIZO [remand prison] for almost a year and a half.

The other three men were convicted of ‘involvement in an extremist organization’, under Article 282.2 § 2.  65-year-old Talyat Abdurakhmanov; Arsen Kubedinov (44) and Seiran Mustafaev (50) received two and a half-year suspended sentences, with a probation period of two years.  Abdurakhmanov also got a year’s restrictions.  He, like Suleymanov, had rejected the pressure and refused to admit to ‘guilt’.

None of the men had denied their involvement in Tablighi Jamaat, an international Muslim missionary movement, which is little known, but certainly not illegal in Ukraine. There appears little to justify the claims made by the Russian Supreme Court when it asserted in 2009 that Tablighi Jamaat’s activities are aimed at “violating Russia’s territorial integrity and discriminating against citizens of Russia on religious grounds, as well as showing support for international terrorist organizations”.

Researchers from the authoritative Chatham House institute had virtually nothing to say about the movement in their 2014 report Transnational Islam in Russia and Crimea.  They noted only that “Russia has pursued a consistent policy in dealing with non-traditional forms of Islam: they are all essentially treated as a security threat”, and mentions Tablighi Jamaat as one of the Islamic organizations with transnational connections which have been banned.

Suleymanov and Abdurakhmanov rejected any claim that Tablighi Jamaat is an ‘extremist’ organization.  Kubedinov and Mustafaev accepted the charges in full, and one of them effectively confirmed in court that they had been promised a lighter sentence for such ‘cooperation’.

Very little was heard about the case after the customary armed searches and arrests on 2 October 2017.  One difference, however, from the notorious arrests of civic activists and other Crimean Muslims on charges linked with ‘Hizb ut-Tahrir’, was the involvement of Aider Ismailov, Deputy Head of the Muftiat, which is collaborating with the occupation regime.  He reportedly agreed to help the men, but only if they rejected ‘biased’ lawyers and accepted ‘guilt’.

Abdurakhmanov, Kubedinov and Suleymanov were initially remanded in custody, while Mustafaev, the only one who had a state-appointed lawyer, was placed under house arrest.

In November 2017, Abdurakhmanov was released, seemingly because of health problems.  In February 2018, Kubedinov was also released, leaving only Suleymanov in custody.

Details are only known of the last few hearings in what appears to have been a fairly short trial, presumably because of the agreed ‘cooperation’.

As reported, Suleymanov was questioned first on 10 January.  He stated that he had only learned that followers of Tablighi Jamaat were regarded as ‘extremists’ who support terrorist organizations after his arrest. While acknowledging his link with Tablighi Jamaat, he stressed several times that he did not support either extremist or terrorist methods.

The only ‘proof’ provided by the prosecution comes from an illicitly taped meeting and a dubious linguistic ‘expert assessment’ of this.  During the hearing, Suleymanov asked the court to pay close heed to this, and said that he and others consciously never discuss politics and try to avoid national or other features of different ethnic groups which can divide different people.

He called the linguistic assessment “manipulative” aimed at confirming the ‘extremist’ charges, while also pointing to at least 10 primitively ignorant mistakes.

Russia has only recently begun prosecuting Muslims for alleged involvement in Tablighi Jamaat and the sentences passed are not as severe as Russia’s notorious ‘extremism’ legislation allows.  Even the de facto prosecutor had demanded a five-year real sentence for Suleymanov which is less than the minimum normally applied under the relevant article.  The sentences were handed down by ‘Judge’ Sergei Pogrebnyak from the Russian-controlled ‘High Court’.  Presumably Suleymanov’s sentence will be appealed.