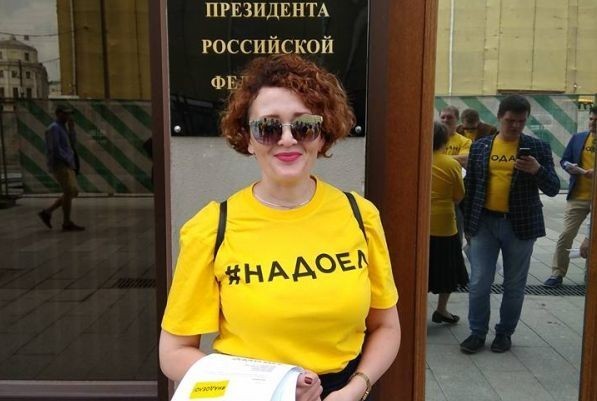 Anastasia Shevchenko has become the first Russian activist to face criminal prosecution and imprisonment for involvement in an NGO which the state has declared ‘undesirable’.  Although the move appears part of a general attack on former political prisoner Mikhail Khodorkovsy’s Open Russia NGO, it presents a dangerous precedent with ramifications for other NGOs defending human rights in Russia and occupied Crimea

Russia’s State Duma passed a draconian law on so-called ‘undesirable organizations’ back on 19 May 2015.  The law allows the authorities to declare ‘undesirable’ any foreign or international NGO deemed  to threaten ‘state security’, ‘national defence capacity’, “public order and the health of the population” or ‘constitutional order’.

The scope for using the law to crush civic society was evident, and swiftly demonstrated in a “patriotic shortlist” of likely ‘undesirable’ NGOs drawn up by Russia’s upper house of parliament in July 2015.  That list included the Crimean Human Rights Field Mission, Freedom House, the Open Society Foundation and a number of other well-known NGOs.

According to the law, NGOs labelled as undesirable are not able to transfer money to Russia, open representative offices in Russia or carry out programs. There is also a ban on circulating of information from such organizations.

There are steep fines for individuals, officials or legal entities taking part in the activities of an ‘undesirable NGO’, with a repeat ‘offence’ of the relevant article of the Code of Administrative Offences within a year leading to criminal liability. Those running the NGO immediately face criminal liability, under Article 284.1 of the Criminal Code.

Shevchenko’s arrest on 21 January 2019 marks the first time that the regime has brought criminal charges.  Novaya Gazeta explains that Shevchenko has already faced two administrative charges over participation in Open Russia public events this year, with these now serving as the pretext for criminal prosecution.  In Open Russia they point out that, using this principle, a lot of activists could end up imprisoned. They also note that the organization has been under major pressure for the last two years.

In December 2017, for example, Roskomnadzor, Russia’s effective censor, blocked the Open Russia website and many other sites, linked with it.  The Open Russia site played an important role in publicizing the ever-increasing number of Ukrainian political prisoners and their ‘trials’ in Russia or occupied Crimea.

The case against Shevchenko, who is a member of Open Russia’s Federal Council, was initiated in Rostov on the Don under Article 284.1 of Russia’s criminal code.

According to the newspaper, there are reports from other cities that other members of the NGO are facing threats of prosecution.

Searches were carried out on 21 January of the home in Kazan of Open Russia lawyer Elza Nisanbekova, as well as in the Rostov homes of four activists.  All are officially ‘witnesses’ in the criminal prosecution against Shevchenko.

Yelena Menshenina, Open Russia Coordinator in Rostov, says that they took away her phone, as well as those of her husband and son, and also the computer.

According to Pavel Chikov from the Agora Human Rights Centre, Open Russia was added to the list of supposed ‘undesirable’ NGOs, later, because of Khodorkovsky’s political activism. He notes that over the last three years, administrative proceedings over involvement in ‘undesirable’ organizations have been launched only against Open Russia activists.  Any of these could easily be used to bring more criminal proceedings against activists.

Khodorkovsky himself, who spent 10 years imprisoned in Russia, condemned all these cases, as well as the new criminal proceedings, as political persecution

It is not as though the authorities are really concealing this.  In Pskov, Dmitry Semenovsky, an Open Russia activist, was taken from his home on 22 January and all contact with him lost.  Late the following afternoon, it was learned that a court had sentenced him to four days’ imprisonment for supposedly refusing to undergo a medical text.

On 17 January, Liya Milushkina, the Coordinator of the Regional Branch of Open Russia, and her husband Artem Milushkin were arrested in Pskov on charges of ‘selling drugs’.  Milushkin was remanded in custody until 15 March, Milushkina placed under house arrest.  Milushkin told the court that he had been threatened with having drugs planted on him when he organized a political rally.  According to Amnesty International, Milushkin had earlier spoken of such threats.  Nobody believes that the couple were selling drugs.

In a number of cases involving Ukrainian political prisoners, ammunition or small amounts of drugs have been planted. There was staggering falsification in the case of Ukrainian activist Volodymyr Balukh in occupied Crimea, but this was totally ignored by courts under Russian control.

Highly questionable criminal proceedings are already widely used against civic activists.  In occupied Crimea, a large number of activists from the civic initiative Crimean Solidarity have been arrested and imprisoned, either for a few days on absurd charges linked with a pre-annexation video reposted on social media or similar, or on charges of involvement in Hizb ut-Tahrir, a peaceful organization that is legal in Ukraine and facing huge sentences.  Even if criminal proceedings under the law on ‘undesirable organizations are simply a pretext to crush Open Russia, they present a frightening precedent and dangerous weapon against those activists seeking to defend human rights and democracy in Russia.