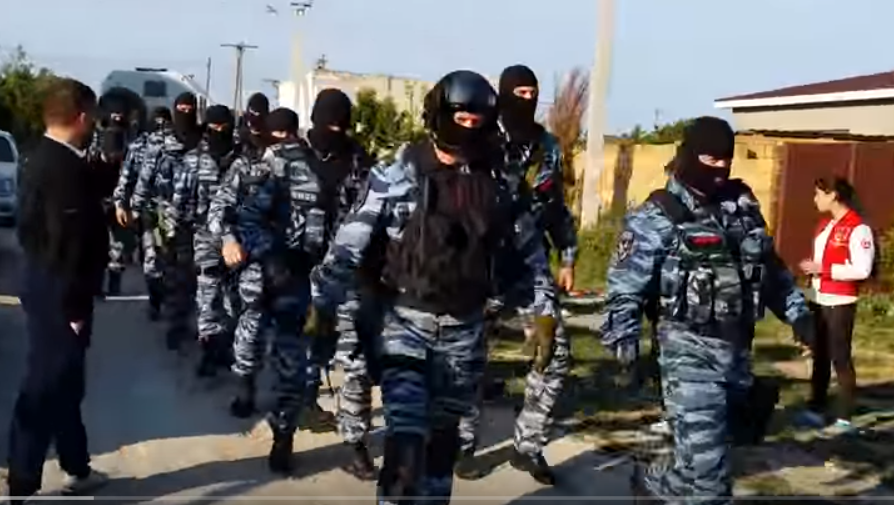 A court in Russian-occupied Crimea has sentenced a man who killed his wife, dismembered her body and threw the parts in different rubbish bins to eight years’ imprisonment.  The sentence was passed just weeks after a Russian court sentenced four Crimean Tatars to 10 to 17 years merely for ‘kitchen chats’ which were claimed to prove ‘involvement’ in the peaceful Hizb ut-Tahrir movement which is legal in Ukraine.  Nor was this a record since three recognized political prisoners, including filmmaker Oleg Sentsov are currently imprisoned in Russia with sentences of 20 years and over.

One of the fundamental principles of law is that a person should know what actions or omissions carry criminal liability, and what punishment they should expect for committing them.  Not so in Russia, nor in occupied Crimea where Russia is illegally applying its legislation  and manipulating it for political purposes.

Such manipulation is particularly shocking in the case of prosecutions under Russia’s ‘terrorism’ legislation for supposed involvement in the Hizb ut-Tahrir party.  Hizb ut-Tahrir is not known to have committed any acts of terrorism anywhere in the world, yet the Russian Supreme Court declared it ‘terrorist’ in 2003, in a ruling that was kept secret until it was too late to challenge it.  Experts from the Memorial Human Rights Centre have long suggested that the original ruling may have been to make it easier for Russia’s FSB to extradite Uzbeks fleeing religious persecution back to Uzbekistan.

This would probably explain why for the first 10 years after the Supreme Court’s ruling, the sentences were significantly lower, and in around 40% of the cases did not involve imprisonment.

What changed at the end of 2013 had nothing to do with any crimes committed by Hizb ut-Tahrir members.  It was merely that a new article was added to Russia’s criminal code: 205.5  (organization of a terrorist organization and involvement in it).  This was analogous to Russia’s notorious Article 282.2, which punishes for something called, very loosely, ‘an extremist organization’.  The difference is that for 205.5, the sentences are massive (by now up to life imprisonment).  For the FSB, this makes easy work and high dividends, since they get bonuses, promotion, etc. for supposedly ‘fighting terrorism’.  All that is required is ‘proof’ that the person arrested has a link with Hizb ut-Tahrir.  If there is no such proof, that is also no problem, as the ‘experts’ used, in particular from one institute in Bashkortostan, will claim that certain words ‘mean’ that a person is involved, and ‘secret witnesses’ can also be used.

Some things are predictable.  In Russia, and now in occupied Crimea, officials who commit real crimes very often receive extremely short sentences.  In 2016, for example,  in a state of inebriation, Russian police officer Andrei Artemyev shot dead a police informer in his office.  For this he got a 1 year 9 month sentence, of which he appears to have served three months.

On 25 August 2015, Ukrainian political prisoners Oleg Sentsov and Oleksandr Kolchenko received huge sentences (20 and 10 years, respectively) on totally fabricated charges.  Those internationally condemned sentences coincided with a ruling releasing Yevgenia Vasilyeva, an official found guilty of major embezzlement, very early from a 5-year sentence. The court saw no need for her to be held even an extra 10 days in case the ruling was appealed.

Worth noting that Sentsov had spoken of getting a 20-year sentence from soon after the FSB seized him, Kolchenko and two other opponents of Russia’s invasion and occupation of Crimea in May 2014.  The reason was quite simple.  During his torture by the FSB, they told him that if he didn’t ‘confess’, he would get 20 years and rot in a Russian prison.

He is by no means the only Ukrainian political prisoner to get a particularly huge sentence as effective reprisal for refusing to confess to fictitious crimes.

The most predictable feature of Russia’s prosecutions of Ukrainians since 2014 has been that guilty sentences are effectively guaranteed, even when ‘the court’ is presented evidence that the Ukrainian defendants were elsewhere, and that the alleged crimes never actually took place.  When Russia’s Investigative Committee was forced to withdraw ‘war crimes’ charges against Serhiy Lytvynov in the face of incontrovertible evidence that neither the alleged ‘victims’ nor their addresses in the Luhansk oblast had ever existed, it simply came up with other totally implausible charges and he was sentenced to 8.5 years’ imprisonment (details here).

In the case of Mykola Karpyuk and Stanislav Klykh, the men’s alibis and proof that the events they were charged with back in 1994/95 had not happened as claimed, proved not to be an impediment.  The ‘court’ also ignored considerable evidence that both men had been abducted, held incommunicado for 18 months in Karpyuk’s case, 10 months in Klykh’s, and savagely tortured for absurd ‘confessions’ to crimes that had never happened.  Karpyuk was sentenced to 22.5 years, Klykh to 20 in what a prominent Russian human rights activist called  “one of the most insane and monstrously falsified prosecutions initiated against Ukrainian nationals since the annexation of Crimea” (details here)