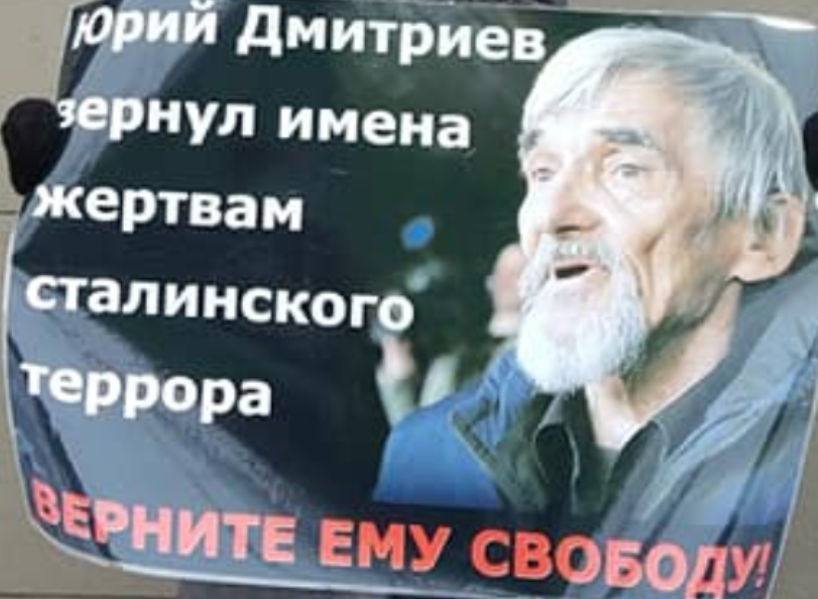 Russia laid on a huge military parade on 27 January 2019 to mark the 75th anniversary of the ending of the Siege of Leningrad.  Kremlin-loyal media and commentators whipped up a hate campaign, worthy of their Soviet predecessors, against German journalist, Silke Bigalke, who had criticized this “dancing on the bones” of the million Leningrad residents who died during the Siege,  There were, in fact, many Russians who felt disturbed by a military parade, rather than sombre remembrance of the victims, including some historians.

How many other historians preferred to remain silent cannot be known, but the number is likely to be rising.  Since Russian President Vladimir Putin first came to power, the narrative about Russia’s Soviet past has changed dramatically, as has the level of freedom to express divergent views.  There are also two historians  behind bars.  Although Yuri Dmitriev and Sergei Koltyrin are purportedly facing ‘non-political’ charges, it was no accident that, after the recent arrest of Koltyrin, a public discussion on the subject both men were involved in, was cancelled.  Documenting the crimes and the perpetrators of Stalin’s Terror has become dangerous in Putin’s Russia.

Little is now known of Koltyrin’s case since,  almost certainly under FSB pressure, he agreed to renounce the services of the same lawyer who is defending Dmitriev.

The FSB has had no success in Dmitriev’s case, neither in breaking his will nor in convincing others that this is not a politically-motivated prosecution.

Dmitriev turned 63 on 28 January.  Although he was originally arrested in December, 2016, this was only his second birthday in Russian detention.  By January 2018, the charges against him had been so demolished during the trial that he was, unexpectedly released under house arrest and then, on 5 April  he was acquitted of the main charge.

Judges in Russian political trials do not make decisions for themselves, and there must have been orders from higher up to pass such a ruling.  What is not clear is whether it was always intended that the acquittal would be overturned a month later, and Dmitriev rearrested on both the same charges, and some additional and especially absurd charges.

Dmitriev is both a world-renowned historian and the head of the Karelia branch of the Memorial Society which has faced constant harassment from the state over recent years.  It was Dmitriev and his Memorial colleagues who uncovered the mass graves of victims of the Great Terror of 1937/38 at the Sandarmokh Clearing in Karelia and helped to make it a place of remembrance visited by people from all over the world. They were supported and assisted by Koltyrin, the Director of the Medvezhyegorsk District Museum, which covers Sandarmokh, since 1991.

Under Putin, who is himself a former KGB officer, there has been a noticeable shift towards rehabilitating the perpetrators of the Soviet Terror and muffling information about the victims.  The results are evident in the record number of Russians who have a positive attitude to Stalin whose portrait, according to Russian rights lawyer Ivan Pavlov, often hangs in FSB offices.

Dmitriev spent 30 years of his life investigating the crimes of the Soviet regime, uncovering the graves of its victims and, increasingly, identifying the perpetrators.  Although many assumed that the criminal charges were in reprisal for this activity, it remained unclear at what level the decision had been made.

While there is still no proof as such, a shocking attempt to rewrite history about the Terror effectively coincided with his arrest and trial.  It was learned in August 2018 that Russia’s Military History Society was to begin excavations at Sandarmokh.  This body was created by Putin in December 2012, in order to “consolidate the forces of state and society in the study of Russia’s military-historical past and counter efforts to distort it”.  It is headed by Russia’s Minister of Culture Vladimir Medinsky, and has initiated such controversial moves as the creation of a museum and bust of Stalin in Khoroshevo (Tver oblast).

The excavations were based on unsubstantiated claims that first emerged in June 2016, six months before Dmitriev’s arrest, that Sandarmokh could hold the graves of Soviet prisoners of war held in Finnish concentration camps and then killed and buried at Sandarmokh during the Second World War.

The aim of this project, in which the activities of two supposed historians appeared to be closely coordinated with the FSB and state media, was clearly to suggest that the mass graves might have nothing to do with the Terror, and to discredit Memorial (more details here).

Koltyrin’s arrest in October 2018 came a month after he made his opposition quite clear to these contentious excavations.  As mentioned, his arrest prompted local deputies to cancel a planned discussion of the developments at Sandarmokh.

On 5 April 2018, Dmitriev was acquitted of the ‘pornography’ charges, however this acquittal was overturned on 14 June, and the case sent back for ‘retrial’.  On 27 June, he was re-arrested, with the ‘investigators’ also charging him with ‘violent acts of a sexual nature’, with the  purported victim once again his adopted daughter.

The absurdity of this extra charge cannot be overstated.  Dmitriev had not seen Natasha since his initial arrest, which means that the new charges pertained to the same period of time as that of the ‘pornography’ charges that had been so debunked in court.  Had there been any possibility of charging Dmitriev with direct abuse of his daughter, it would have been reflected in the original charges, not added in pique after the pornography allegations were dismissed by experts.