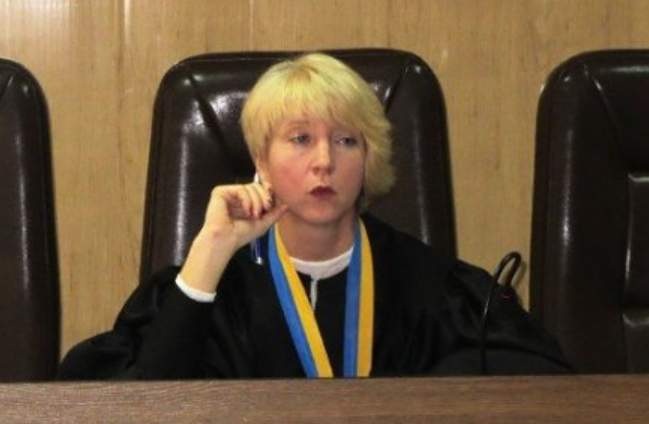 Ukraine’s Supreme Court has revoked a questionable reprimand issued against Larysa Holnyk, the judge who publicly exposed an attempt originating from the Mayor of Poltava to bribe her into providing the ruling he wanted. The reprimand has already served to prevent Holnyk from competing for a post in the new Anti-Corruption Court, unlike a very large number of judges whose professional integrity and commitment to fighting corruption have been questioned.

Holnyk’s courage in blowing the whistle on corruption has earned her the respect of many civic organizations both in Ukraine and abroad.  It has also highlighted everything that judicial reform in Ukraine, five years after Euromaidan, has still not become.  Since 2015, she appears to have suffered considerable harassment from the president of her court (the Oktyabrsky District Court in Poltava),inexcusable delay in confirming her life tenure as a judge, and numerous court suits.  She and her husband were also the victims of a vicious attack on 22 November 2017.  It was in connection with this that in 2018 Holnyk was placed on the ‘Handziuk List’  of 55 Ukrainians who had been the victims of attacks which were either entirely unsolved or only partially solved.  The list is named after civic activist Kateryna Handziuk who died on 4 November 2018 of injuries after being sprayed with a huge amount of sulphuric acid.

There seems to be little or no progress in finding Holnyk’s assailants which the victims clearly believe is for want of any real effort.  This is particularly shocking for two reasons.  Holnyk’s husband, Ihor Havrylenko, believes that the young men were lying in wait for Holnyk and may not initially have seen that she was with him.  Together he and Holnyk put up enormous resistance, but were still injured.  By herself, Holnyk would have had no chance.

The other reason is the background to the attack which make it difficult not to link it with Holnyk’s work.

In 2014, Oleksandr Strukov, the president of the Oktyabrsky District Court assigned Holnyk a case involving a decision on land distribution.  It became clear that this was a case in which the Mayor of Poltava, Oleksandr Mamay had an interest, and there were attempts, including from a representative of the Mayor to bribe Holnyk into giving the ruling ‘required’.

Holnyk, however, taped that last corrupt offer from 14 January 2015,  and made this very public.

She asserts that retaliation was swift, and not only from the Mayor’s people, with countless attempts to bring criminal or disciplinary proceedings and defamation suits against her. Strukov made her life in the court hell, she says, with attempts to cut her pay, force her to take leave in the middle of winter and numerous disciplinary penalties, which she considers fabricated.  Strukov has certainly not concealed his attitude.  During a recent visit to the court by a working group from the Council of Judges, Strukov very publicly claimed that everything is fine in the court, it’s only Holnyk who gets in the way.

Holnyk says that she turned to the National Agency for Corruption Prevention almost immediate since she was suffering harassment as a person who had blown the whistle on corrupt dealings.  It was, however, only in the autumn of 2017 that NACP reacted. However belatedly, the Agency did find in her favour, and on its instigation, the Council of Judges turned to the High Council of Justice, calling on the latter to hold Strukov to account.

It was part of the High Council of Justice’s strange reaction that has just been revoked.  With respect to Strukov, HCJ confined itself merely to a ‘severe reprimand’ with three months’ loss of supplementary payments.  As Holnyk notes, this was “for several years’ persecution of a judge whistle-blower exposing a crime of corruption”.  The same High Council of Justice, however, allowed a counter-complaint made by Strukov against Holnyk over a Facebook post and some other allegations.

In revoking this decision, the Supreme Court’s High Chamber noted that the complaints against Holnyk had come solely from Strukov, a person with whom she had  conflict for a considerable amount of time.  There had been no other complaints from colleagues.   Given the specific situation in the court, and the “objective emotional tension” that she was facing, the High Chamber concluded that she had been exercising her right to freedom of expression.

The Supreme Court’s judgement is welcome, but came too late to enable a person with proven interest in fighting corruption to apply for a post in the Anti-Corruption Court.

One of the reasons for the difficultes Holnyk has faced goes beyond Poltava.  In Ukraine, a judge is initially appointed for five years, after which a decision is made, and confirmed by Presidential decree, to grant life tenure.  Holnyk’s five-year term ended in April 2015.  It took the High Council of Justice until 6 February 2018 to apply to President Petro Poroshenko to appoint Holnyk to indefinite tenure.  It then took the President around 10 months and a civil suit brought by Holnyk before he issued the relevant decree.  All of that time, Holnyk had retained her position, without the ability to serve as a judge.