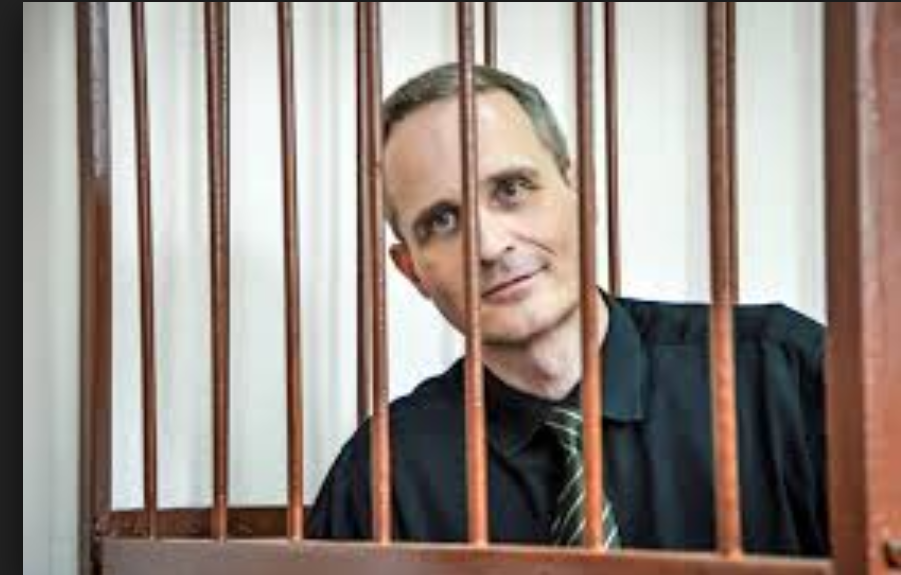 A Russian court in Oryol has sentenced Dennis Christensen to six years' imprisonment for practising his faith.  Christensen was the first Jehovah’s Witness to be arrested and imprisoned after the Russian Supreme Court’s extraordinary ban on this world faith.  Although recent comments by  Russian President Vladimir Putin about it being 'absurd' to prosecute the Jehovah’s Witnesses, had raised hopes of a possible change in state policy, there has been no let-up over the last year in armed searches and arrests of believers, and this first sentence is likely to lead to many more.

It was probably not intentional that the Supreme Court’s ruling fell on Adolf Hitler’s birthday, 20 April 2017, but a link with the Nazi regime is inevitable.  The Jehovah’s Witnesses were persecuted by both the Soviet and the Nazi regimes, and it is galling that Russia is now returning to those dark days, and dragging Ukrainian Crimea with it.

The first arrest came just a month after the ban, on May 25, 2017.  Dennis Christensen, then 46, is a Danish citizen and a Jehovah’s Witness Elder, who had lived legally in Russia since 2000.  Christensen has been imprisoned ever since – the first Jehovah’s Witness in post-Soviet Russia to be deprived of his liberty for his faith.

He is charged under Article 282.2 § 1 of Russia’s criminal code (‘organizing the activity of a religious organization whose dissolution has been ordered due to extremist activities’).

In declaring Christensen a political prisoner, the Memorial Human Rights Centre stated that the charges against him, based solely on the fact that he is a Jehovah’s Witness, are discriminatory and in violation both of Russia’s Constitution and of international legal documents, particularly those enshrining the right to freedom of conscience and religion.  Memorial HRC had earlier condemned the decision to ban the Jehovah’s Witnesses as ‘extremist’.  It pointed out that the Court had not provided even one example where believers had breached public order, shown aggression or violence, or in any way indicated that their activities were a threat to the security of the Russian Federation. One of the ‘expert assessments’ used to justify the Supreme Court ban pointed to the conviction that the path taken by the Witnesses makes them the chosen of God.  As Memorial noted, this is essentially a feature of all religious faiths.

Christensen’s ’trial’, which began in April 2018 at the Zheleznodorozhny District Court in Oryol, ended with prosecutor Ivan Fomin claiming that the charges had been proven and demanding a real (6.5 year) sentence and Christensen’s final address to the court on 30 January 2019 (spoken using an interpreter).

Christensen said that he had felt, throughout the trial, that he had already been convicted.  He said that he did not understand why he was in detention, and considered this to be unlawful.  There was nothing to suggest that he would flee if released from custody, and he could only assume that the detention is aimed at frightening other Jehovah’s Witnesses and forcing them to renounce their faith.

“I did not violate anything and I consider the indictment illegal.  In the USSR Jehovah’s Witnesses were also imprisoned.  They were accused of anti-Soviet activities because they practised their faith. In 2019, it is all being repeated. Calling the Jehovah’s Witnesses extremist is absurd and has nothing to do with reality.  This is direct religious persecution under the guise of fighting extremism.”

He reiterated that this should not be happening again in the XXI century.  “Your honour, you can stop this and not create a precedent which will influence the fate of thousands of Jehovah’s Witnesses in Russia.  Be guided by your conscience”.

All such cases are decided at a much higher level, however Christensen is, of course, right since judge Andrei Rudnyov did once take an oath to defend justice, not to take part in a shameful act of religious persecution.

According to the Memorial Human Rights Centre, there are already 81 Jehovah’s Witnesses whom Russia is persecuting for their faith, including one Crimean, Serhiy Filatov.   A very large number of these believers are held in custody.

Russia’s first ‘operation’ in occupied Crimea was in Dzhankoy, and involved searches of about 30 addresses during the night from 15-16 November 2018.  46-year-old Filatov was initially arrested, and a 78-year-old believer manhandled, The operation was widely reported, though in carefully edited form, on Russian and Russian-controlled media as the “detention of extremists”, with a ‘Ukrainian link’, as always, added (details here).

Russia’s persecution of believers became much more intense from the spring of 2018, and, while Crimea remains under Russian occupation, it will surely come for and imprison believers there too. In both the USSR and Nazi Germany, one of the reasons Jehovah’s Witnesses were persecuted was their refusal to take up arms.  There have already been reports in occupied Crimea of young men being told to renounce their faith if they don’t want to search in the occupying state’s army

A particularly shocking aspect of this persecution, as well as that of Crimean Muslims, is that it is often based on the testimony of supposed ‘secret witnesses’.  It is each Jehovah’s Witness’ duty to spread news about their faith to others.  Those others are now quite likely to include FSB infiltrators, most probably armed with recording devices