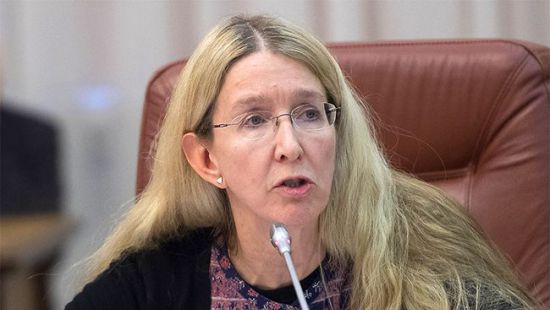 A Ukrainian court has suspended Acting Health Minister Ulyana Suprun from carrying out any ministerial duties pending consideration of a legal challenge brought by a highly controversial MP, Ihor Mosiychuk.   The move elicited outrage among many civic activists and was described by MP Hanna Hopko as an overt attempt to disrupt medical reform in Ukraine.  Hopko calls it “a challenge to all those for whom it’s important that reforms in healthcare and generally in Ukraine become irreversible”.  While there are certainly medical people who do not support Suprun, she is very widely believed to be genuinely carrying out real and urgently needed reform of the healthcare system in Ukraine.

Mosiychuk is currently a member of Oleh Lyashko’s Radical Party.  He claims that Suprun’s removal is “one of the elements of the struggle to improve medical services for Ukrainians”.  Mosiychuk gives no indication as to why he thinks that Suprun “has worsened the situation in this field”, nor any ideas for improving it beyond getting rid of her.  Unlike Suprun, neither he nor Lyashko have any background in medicine.  It is also unclear what happened to the serious criminal proceedings Mosiychuk was supposed to be facing for alleged bribe-taking.

Mosiychuk lodged a civil suit with the District Administrative Court in Kyiv on 14 January 2019, asking that the court find that Suprun lacks the relevant competence for the post of Acting Health Minister.

Suprun and her husband were both born in the United States, but came to Ukraine on the eve of the Euromaidan protests, during which Suprun’s skills as a doctor were badly needed. She was appointed Acting Health Minister on 27 July 2016.  Judging by comments made on 5 February by Deputy Prime Minister Pavlo Rozenko, Suprun would not get enough votes now to be appointed Minister, and not Acting Minister, and this is probably the reason she continued to hold an ‘acting’ post for so long.

That there has long been resistance to her is clear also from the decision of the Verkhovna Rada Committee on Healthcare Reform on 2 October 2018 to appeal to the Cabinet of Ministers to dismiss Suprun and her Deputy, Oleksandr Linchevsky.

Suprun both then, and earlier, rejected such moves from the Committee and remained in her post.

Judging by the court ruling posted on social media, this was the second attempt to get Suprun suspended pending review of Mosiychuk’s lawsuit.  The first, in January, was rejected since the court found no reference to specific actions that Suprun could take or indication of their consequences.

The ruling passed by Serhiy Karakashyan on 5 February does not especially explain how this has now changed, however several hours after the news was first posted on Facebook and then very widely reported in the media, an announcement was posted on the District Administrative Court’s website.  This asserted that Mosiychuk’s application had been partially allowed, in that Suprun was prohibited from carrying out any activities as Acting Minister, but could undertake the powers delegated to her as Deputy Minister.

The reasons given in this statement are that 1) you can only be acting minister for one month; 2) Suprun received Ukrainian citizenship in 2015 but did not renounce her US citizenship (Ukraine does not, at least officially, allow dual citizenship).

The experiences of at least two foreign nationals who took on Ukrainian citizenship, only to later be stripped of it by President Petro Poroshenko (Mikheil Saakashvili and Sasha Borovik) would make it quite understandable should Dr Suprun have not wished to renounce her former citizenship.

The problem with both these reasons is that they apply to others in managerial posts as well, and yet are ignored.

The Cabinet of Ministers has issued a statement expressing support for Suprun and expressing “concern over the unprecedented pressure which has been brought to bear through various means aimed at blocking the efforts to reform healthcare carried out by the Ministry of Health under the leadership of Acting Minister Ulyana Suprun”.

It was Suprun and her team, the statement goes on to say, that declared war on the corrupt practices that had flourished in this field for years.  That, they believe, is the real reason why “war has been declared on them”.

The Cabinet of Ministers’ list of achievements includes: programs aimed at ensuring accessible medicine; overcoming corruption in procurement of medicines; reform of the system of primary healthcare; increasing the level of pay of doctors; introducing new demands on professional level for medical workings and developing a network of cardiological centres.  Other reforms are also planned.

All are now in danger, the statement reads, and promises that the Cabinet of Ministers will appeal against the court’s ruling.  Media reports say that the President has also expressed his support for Suprun.

Cynics have suggested that Mosiychuk, a judge from the District Administrative Court and a regulation on a time limit ignored for 31 months and suddenly noticed now, are being used to remove a reform-minded (acting) minister.

If that is the case, then civic opposition within Ukraine and protest from the international community are all the more urgently needed.