Putin Appoints Apologist for Stalin as Russian Education MinisterPortraits of Stalin hang in police offices in Putin’s RussiaMonument to Joseph Stalin unveiled in militant-controlled LuhanskRussian-Occupied Crimea: Memorial Plaque and Glorification of StalinDramatic increase in number of Russians who justify StalinStalin Museum: Putin’s Russia Immortalizes Bloody DictatorAnger and Protest over Stalin Monument in YaltaPortrait of Stalin appears in Russian-occupied CrimeaStalingrad as latest step in re-glorification of tyrantNeo-Nazis in Moscow’s ServicePro-Russian separatists start their own anti-Semitic TV channelPro-Russian, anti-Roma, anti-Semitic and hunting out Ukrainian speakersThe Donetsk anti-Semitic leaflets – what should not be overlookedEast Ukraine crisis and the ’fascist’ matrixRussia continues its false narrative as defender of oppressed minorities in UkraineRussian propaganda claims Jewish organizations supporting Maidan are bringing on "second Holocaust"The Crimean referendum’s neo-Nazi observersPutin’s Neo-Nazi HelpersChief Rabbi and others dismiss Putin’s “anti-Semitic extremist” claimsRussian propaganda must be challenged
• Topics / News from the CIS countries 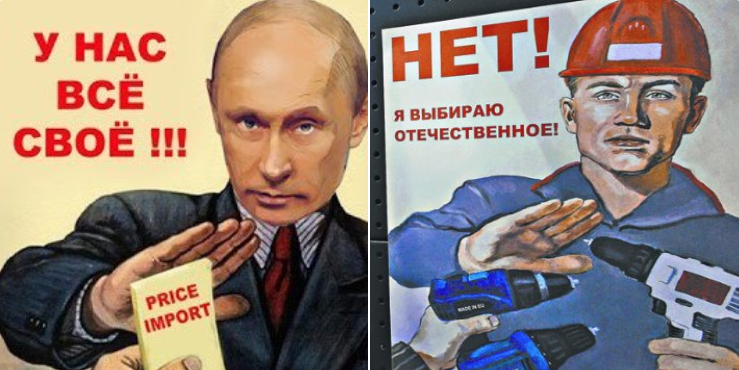 The author of a series of Russian school textbooks on economics has had one of the books rejected for lack of material fostering patriotism. Igor Lipsitz’s ‘Economics’ textbook for the 10th and 11th grades was not included in the Federal List of Textbooks, he has told Kommersant, due to the lack of material about “import substitution” which is supposedly “one of the directions in contemporary economic policy, forming in the students a sense of pride in their country and involvement in what is happening”.

Russia is heavily dependent on import of most food items and other goods.  Although there were reportedly plans aimed at changing this earlier, it was the sanctions imposed in 2014, after Russia’s invasion of Crimea, aggression in Donbas and the downing of Malaysian Airliner MH17, that made the situation more urgent, and prompted the drive to give it a patriotic coating.

Moscow essentially banned imports from EU countries and Ukraine in retaliation for their sanctions.  The ban was for a long time bypassed, however in August 2016, President Vladimir Putin issued a decree ordering the destruction of all food items that entered the country illegally.  In a country where a minimum of 23 million people live below the poverty line, and many others would eat fresh fruit or vegetables only at the height of summer, over 500 tons of food were bulldozed or incinerated in just the first week or so.   Although there were no major protests, outrage was evident and the state-controlled media stopped showing this barbaric destruction.  It is still continuing, two and a half years ago, with 928 tons of meats, cheese, fruit and vegetables destroyed just in St. Petersburg during 2018.

All this coincided with developments in ‘state policy’. If the Wikipedia entry is anything to go by, it is not surprising that Lipsitz saw no need to clutter his book with details about the state program initiated, the other legislative acts “aimed at more clearly positioning the role of the state in the process of import substitution” and the commission on import substitution created.

Both the Ministry of Education and the Russian Educational Academy which carried out the expert assessment have denied making any recommendations about the book to Lipsitz, claiming that they must have come from the publisher.  In fact, however, it was the expert assessment that asserts in its conclusion that the author’s material “does not foster love for the Motherland”.

The recommendations sent by the publisher Vita-Press were based on the expert assessment.  In order for the textbook to get back on the Federal List of Textbooks, its author was advised to provide “a more correct presentation of the modern economic situation (from the point of view of its assessment) and the story of how it came about”.  He was also told “to exclude a number of issues to debate which could provoke negative, unconstructive discussion”.

Based solely on the expert assessment, the publishers also recommended that Lipsitz include “material about plans for the coming economic breakthrough”, as well as the above-mentioned focus on import substitution as forming a sense of pride in their country and feeling of being a part of what is happening.

Lipsitz told Kommersant that he does not agree with the criticism, and does not believe the book will be returned to the Federal List.  He would be prepared to make some corrections, he says, to avoid difficulties arising if the book gets used as a handbook, rather than the main textbook.

He is not, however, really to add “joyful words about a take-off in the economic and patriotic surge for the sake of import substitution”.    “I have forgotten how to write that sort of thing over the last 25 years and I don’t plan to reinstate such skills in verbal diarrhoea”.

It seems likely that Lipsitz’s book is not the only one that has been found ideologically incorrect.  Kommersant explains that up till last year, the Federal List of Textbooks was compiled by the Russian Academy of Sciences.  In 2018, however, the Education Ministry commissioned new expert assessments from the Russian Education Academy of which it is one of the founders. This resulted in a huge reduction in textbooks on the list (from 1370 to 863).

This is the first report of demands being made on economics textbooks, however state efforts under Vladimir Putin to ‘readjust’ history began at the latest in 2007 when Putin spoke of what he called “certain positive moves in the treatment of Russian history in modern textbooks” away from presentation that could “make your hair stand on end”.  That year, after Putin addressed a conference of teachers in June 2007, a manual appeared by Alexander Filippov appeared, describing Stalin as “one of the most successful leaders of the USSR”.  Stalin’s aim in both domestic and foreign policy, it was stated, had been the restoration of the Russian Empire.  The purges had “led to the formation of a new governing class, able to cope with the task of modernization given the shortage of resources – unwaveringly loyal to the upper echelons of power and irreproachable from the point of view of executive discipline”.

Since then, and especially after Putin appointed Olga Vasilyeva, a woman known for apologist views about Joseph Stalin as Education Minister in August 2016, there has been an effective ‘rehabilitation’ of Stalin, not his victims, and very serious distortion of historical fact, especially about the Second World War.