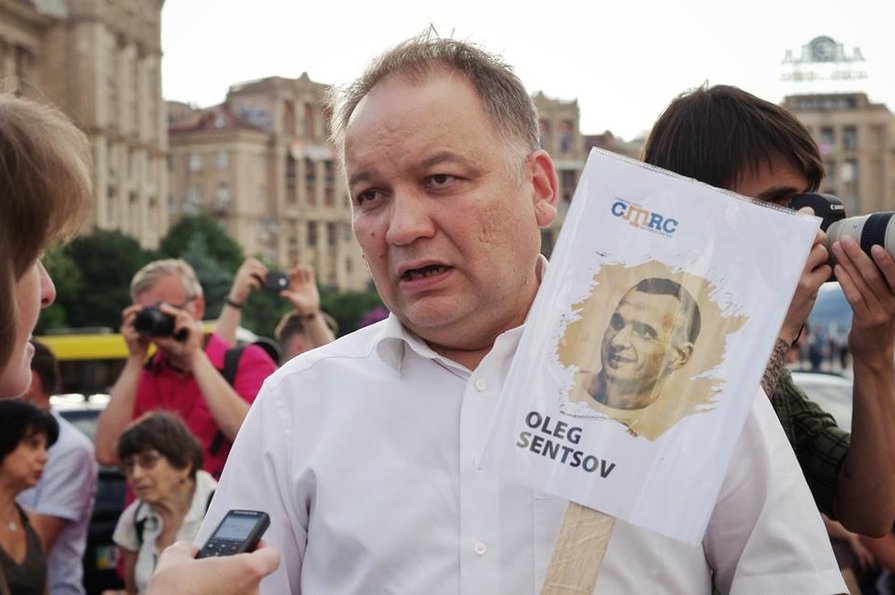 Five years after invading and annexing Eskender Bariev’s homeland, Russia wants to imprison Bariev for objecting, which it refers to as making ‘public calls aimed at violating Russia’s territorial integrity’.  Bariev is a member of the Mejlis, or representative assembly of the Crimean Tatar People which Russia has banned.  He is also the Head of the Crimean Resource Centre and is involved in the international movement #LiberateCrimea, though from mainland Ukraine where he has lived since Russia began violating Ukraine’s territorial integrity in February 2014.

Bariev learned on 13 February that the Russian-controlled ‘High Court’ in Crimea had, on 29 January, upheld a ruling from 24 December 2018 ordering him to be remanded in custody for two months from when detained on Russian territory or extradited to Russia.  The charges are under Article 280.1 § 2  of Russia’s criminal code, i.e. supposed ‘public calls to carry out actions aimed at violating the territorial integrity of the Russian Federation via the mass media’.

This article was introduced in May 2014 and has, as feared, been used on several occasions to prosecute people who, in full accordance with international law, state that Crimea is a part of Ukraine.   All the prosecutions thus far in Crimea (of Crimean Tatar Mejlis leader Ilmi Umerov; Crimean journalist Mykola Semena and Crimean Tatar activist Suleyman Kadyrov) have been quite surreal since the men were all on trial for expressing the position on territorial borders which the Russian Federation agreed to uphold in multiple international agreements that it has not withdrawn from. It is the position held and constantly reiterated by the UN, EU, OSCE, all democratic countries and the International Criminal Court.

Bariev has long been aware that he would be arrested if he returned to occupied Crimea, so the new charges essentially only confirm what he already knew.  It is inconceivable that any democratic country would extradite him to Russia, however the fact that Russia is claiming to have put him on the ‘international wanted list’ is disturbing.  There is nothing on the Interpol website, and it would certainly be outrageous had this international policing body agreed to issue a Red Notice so that Russia could persecute a Ukrainian citizen for his opposition to Russia’s annexation and his human rights activities.

“By declaring me on the international wanted list, the Russian authorities are trying to restrict my activities at an international level, in particular, my human rights activities at various international platforms and in developing the international movement for the de-occupation of Crimea and solidarity with the Crimean Tatar people #LiberateCrimea”, Bariev states, adding that Russia’s attempts to silence him will not work.  As well as continuing his work, he will be challenging Russia’s criminal prosecution, first at cassation level in Russia and then in the international courts.

Bariev is not the first member of the Crimean Tatar Mejlis to be facing such charges.  On May 29, 2015, Natalya Poklonskaya, then the Russian-installed Crimean prosecutor, announced that Refat Chubarov, Chair of the Mejlis, was facing the same insane charges of seeking to ‘violate the territorial integrity’ of the country which was illegally occupying his homeland.  In October that year, Chubarov posted a ruling on his arrest warrant with the same wording as that issued in Bariev’s case.  The situation was especially absurd since Russia had, in July 2014, banned Chubarov from occupied Crimea.

That was the second, and by no means the last, ban against Crimean Tatars and other Ukrainians whom Russia sees as a threat.  In April 2014, veteran Crimean Tatar leader Mustafa Dzhemilev, who was just 6 months old during the 1944 Deportation, was, for a second time made an exile from his homeland.  Russia later came up with even more grotesque criminal charges against him.

All of these ‘prosecutions’ are against members of the Crimean Tatar Mejlis forced out of Crimea.  In January 2015, the highest-ranking Mejlis leader in Crimea, Akhtem Chiygoz was arrested on charges that even violated Russian legislation.  He was finally exchanged (seemingly for two suspected Russian state assassins arrested in Turkey) in late October 2017 (details of the case here).

Russia is continuing to flout the order from the International Court of Justice that it revoke its extraordinary ban on the Mejlis.