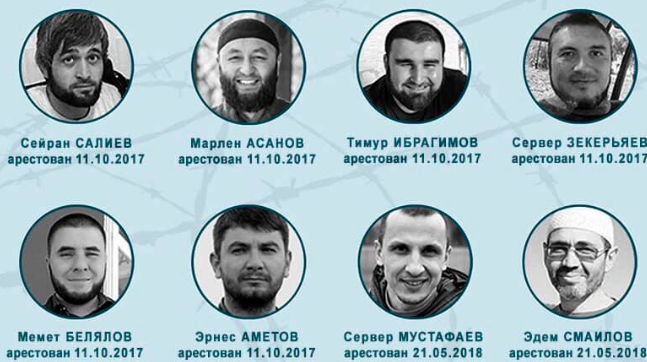 Eight Crimean Tatar political prisoners from Bakhchysarai, most of them activists from the Crimean Solidarity civic initiative, have been informed that they they are facing new criminal charges. There are grounds for suspecting that the added charge of ‘planning to violently seize power’', brought almost a year and a half after six of the men were arrestsd, is punishment for refusal to ‘cooperate’ with the investigators.

The first news of extra charges had seemed more modest, though just as lawless.  On 20 February, lawyer Mammet Mambetov learned that one of the men, Seiran Saliev, had been hurled new charges when he visited him in the Simferopol SIZO [remand prison].  ‘Hurled’ is the only word appropriate since Seiran Saliev  that the document notifying him of this was simply pushed through the window opening into the cell “as through thrown to a dog”.

That document informed Saliev that he was being additionally charged over videos posted on VKontakte from 2013, i.e. a year before Russia’s annexation of Crimea.  The ‘investigators’ claim that the videos, posted between 2013 and 2015 fall under the article of the Russian criminal code on something termed ‘public calls to terrorism; justification and propaganda of terrorism’.  Despite such apparently serious claims, it is likely that the videos in some way mention the peaceful pan-Islamism movement Hizb ut-Tahrir.  It is also possible that they provide information about other political prisoners who are, like Seiran, facing long sentences for alleged ‘involvement’ in this movement which is legal in Ukraine and is not known to have committed any acts of terrorism or violence anywhere in the world.  Russia’s Supreme Court declared it ‘terrorist’ in 2003, without providing any decent explanation or opportunity to appeal the decision.  That judgement has since been used to pass huge prison sentences on Russians and, under Russian occupation, Ukrainian Muslims.  This will be the second criminal prosecution in occupied Crimea under Article 205 § 2 .  Those against civic journalist and Crimean Solidarity activist Nariman Memedeminov are over videos on YouTube which mention Hizb ut-Tahrir and Russia’s persecution of people for alleged involvement in it.

It is unclear why the new charge has been brought now, although there has been  in Russian criminal prosecutions under Article 205 § 2 – from 13 convictions in 2014 to 111 in 2017.   The move also coincides with attempts by Russia’s censor Roskomnadzor to force YouTube to remove a video about imprisoned Crimean Tatar human rights activist Emir-Usein Kuku who was also arrested on ‘Hizb ut-Tahrir charges’ after facing other forms of persecution for his human rights activities.

Saliev had also faced persecution for some time before his arrest on 11 October 2017.  In August 2016 he received  in an administrative prosecution for having used the Mosque loudspeaker to warn Bakhchysarai residents that armed searches were underway of the homes of four Crimean Tatars on 12 May that year.   This was claimed to have been ‘an unauthorized demonstration’.

In January 2017, Saliev  for 11 days over a social media repost from 2013 about a Hizb ut-Tahrir meeting.  It is quite likely that this is one of the videos over which they have now decided to bring criminal charges.

Saliev was one of six men, almost all of them activists from Crimean Solidarity, arrested on 11 October 2017 after armed searches that found nothing but some religious literature.  The six men, all of whom have young children, have been imprisoned ever since and are facing the same horrifically long sentences as other Ukrainian Muslims convicted so far over alleged involvement in Hizb ut-Tahrir. Suleyman (Marlen) Asanov has been designated the role of ‘organizer’ of a Hizb ut-Tahrir ‘cell’ (under Article 205.5 § 1 of Russia’s criminal code), with this carrying a sentence of up to life imprisonment. The other five men:  Ernest Ametov;  Memet Belyalov; Timur Ibragimov; Saliev and Server Zekiryaev are accused of ‘involvement’ in this  (under Article 205.5 § 2 – from 10 to 20 years’ imprisonment).

Further confirmation that this was an attack on Crimean Solidarity came on 21 May 2018 with the arrest of Server Mustafaev, one of the coordinators of Crimean Solidarity and Edem Smailov who has also been involved in the civic initiative.  They are now also facing charges in this same ‘Hizb ut-Tahrir case’.

As mentioned, all eight men were informed on 22 February 2019 of an additional charge – under Article 278 of Russia’s criminal code (‘planning a violent seizure of power’).  This new charge is not based on any evidence about the men and simply follows from the Supreme Court’s ruling in 2003.

The Russian Memorial Human Rights Centre to evidence that the FSB applies this extra charge in cases where men refuse to ‘admit guilt’.

Russia has had difficulty in occupied Crimea where the ever-growing number of political prisoners prompted the formation of the Crimean Solidarity civic initiative to help political prisoners and their families and to report on rights abuses.  Not one of the men arrested on these charges has agreed to ‘cooperate’ with the investigators, and the lawyers representing the men have demonstrated in ‘court’ the fabricated nature of the charges and of the ‘evidence’ provided.

This, tragically, has had little impact upon the ‘judges’ who know that they will be in trouble if they don’t convict the men.  It has, however, highlighted the conveyor belt nature of the prosecutions and the travesties of justice far beyond Crimea.  It is almost certainly for this reason that Russia has begun aggressive measures against lawyers representing Crimean political prisoners, in particular, Emil Kurbedinov, and has arrested so many members of Crimean Solidarity.