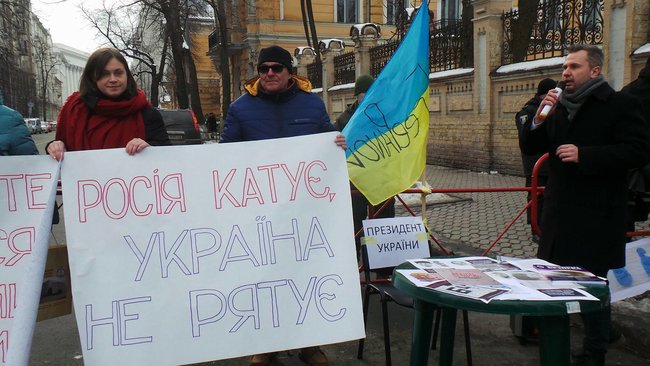 Two Ukrainian human rights activists scheduled to speak at a high-level event marking five years of Russia’s occupation of Crimea were removed from the agenda after they sent details of their speeches.  The proceedings in the Verkhovna Rada on 19 February, involving the President, Prime Minister and other high-ranking figures, were clearly viewed as an opportunity for political campaigning and quotable lines about fighting Russian aggression.  At such events there is no place for hearing hard facts about unresolved problems that a huge number of Ukrainians are facing, both those living under occupation, and those forced to live in exile as ‘internally displaced people’ [IDP].

Alyona Lunyova from the Human Rights Information Centre and Olha Skrypnyk from the Crimean Human Rights Group were both forced to leave their homes in Crimea five years ago.   They believe that at least six million Ukrainians have suffered in one way or another because of the military aggression unleashed in 2014 and were hoping to highlight the issues that need to be addressed.

The following are the issues that Ukraine’s leaders felt could be cut from their anniversary event in parliament.

Assistance to victims of political persecution in occupied territory or Russia, as well as their families

There are currently at least 70 Ukrainians imprisoned in occupied Crimea or Russia on politically motivated charges or for their faith.  This is not counting the 24 prisoners of war whom Russia seized after attacking three Ukrainian naval boats on 25 November 2018.  Nor does it include at very least 116 military or civilian hostages held in the so-called ‘Donetsk and Luhansk people’s republics’.  There is every reason to believe that their release is also dependent on a decision from Moscow.

The number of political prisoners in occupied Crimea is increasing and, with it, the number of children whose fathers have been taken away.  While financial help cannot heal the psychological trauma of armed arrests and of effectively losing their fathers, there are now 111 children whose families are having trouble making ends meet.  The Crimean Tatar civic initiative Bizim Balalar [Our Children] has reported that they are having difficulty finding the money that they have been trying to provide to each family

There is a clear and urgent need for a comprehensive law to help and defend the rights of such prisoners and hostages, yet despite constant apparent moves in this direction, none has yet been passed.  Draft Law No. 8337 was first tabled in May 2018, and is currently on the parliamentary agenda.  In fact, human rights groups are critical of the bill which does not achieve its purpose, does not comply with international law and also creates additional risks.  A law in this field must clearly define the status of all the categories of prisoners illegally held, the criteria for deciding who needs assistance and must provide transparent and independent procedure for making such decisions.

Pensions and other social protection for people in occupied territory

Pensioners living in occupied territory are forced to register in government-controlled Ukraine as IDP in order to receive their money which many may be totally dependent upon.  They then have to endure huge queues at the checkpoints to first reach non-occupied territory and then return every two months.  It is hardly surprising that at least 10 elderly people have died at checkpoints since the beginning of 2019  (details here).

Lunyova and Skrypnyk point out that almost 700 thousand pensioners from the Donetsk and Luhansk oblasts are owed  their pensions, with the amount outstanding having already reached 62 billion UAH and rising.

Some of the other points will be discussed here in greater detail, including the extraordinary practice of Ukraine’s Pension Fund in passing the personal data of Crimeans to Russia, the country that invaded and annexed Crimea.  The Pension Fund is essentially – and illegally -  trying to avoid paying pensions that the Crimeans are entitled to by seeing whether Russia has paid them.

Ukraine’s parliament has yet to abolish the shocking Law on making Crimea a free economic zone, in force since September 2014 and a related resolution from the National Bank of Ukraine.  This is despite totally unwarranted discrimination against Crimeans who are treated as ‘non-residents’ in their own native Ukraine  with the corresponding inability to fully use banking services.

Other measures are also needed.  These include simplifying registration of births and deaths of Ukrainians on occupied territory.  A law was passed last year making such registration possible on the basis of documents issued on occupied territory, however the Justice Ministry does not support this, and no procedure has yet been drawn up.  This means that huge numbers of children born in occupied Crimea  (up to 90%) or in the so-called ‘Donetsk and Luhansk republics’ (57%) have received official Ukrainian birth certificates.

Simplification of the procedure for crossing the administrative border with Crimea and checkpoints in Donbas, as well as provision of appropriate conditions, including waiting rooms, conveniences and transport connections.

There are currently quite unwarranted restrictions, which need to be cancelled, on the personal possessions which can be carried out of occupied territory.

Draft bill no. 6240 needs to be passed in order to rectify the current situation whereby IDP are prevented from voting in local elections and in part of the voting in parliamentary elections.  This is a shocking denial of their electoral rights.

A draft bill has finally been drawn up to bring Ukrainian legislation into line with international law so as to enable punishment for crimes against humanity and war crimes.  Until No. 9438 is passed, the explanation below remains up-to-date:

After almost 5 years of Russian aggression, Ukraine is still unable to prosecute for war crimes

Lunyova and Skrypnyk had also hoped to discuss the need to create a Military Ombudsperson to defend the rights of members of the Armed Forces; the National Guard and the Border Guard Service.  They also wanted to call for amendments to the Law on Sanctions, in order to introduce sanctions for those guilty of gross rights abuses in occupied Crimea.

The above was undoubtedly a lot to digest during an event scheduled to last less than two hours.  One of the reasons, however, is that many of the issues have been stubbornly brushed aside for the last five years.  Preferring pathos and rousing speeches, without specifics, will not make them go away.