Why are Ukrainian pensioners from Donbas forced to fight or die for their pensions?“We’re not celebrating today” – digest of Russian protests (early June 2022)Obstacles to Registration and Citizenship Confirmation Threaten to Create a New Wave of Statelessness in Ukraine: A Preliminary Legal AnalysisCouncil of Europe collaborates with Russian agency persecuting Crimean Tatar and other Ukrainian political prisoners Prisoners’ rights in Ukraine 2014-2021: KHPG reportA brief description of the KHPG strategic litigations in July–December 2020Expert opinion (Amicus Curiae) on the application and interpretation of the case-law of the European Court of Human Rights in criminal proceeding № 52017000000000361Human Rights Agenda calls on the government to return to legal means of leaving the constitutional crisisCrisis deepens after Constitutional Court sabotages Ukraine’s anti-corruption reformRussia’s fake ‘Ukrainian fascist’ returns to Ukraine to fight against ‘fratricidal’ war in DonbasA brief description of the KHPG strategic litigations in January – June 2020The Easing of MoralsA brief description of KHPG strategic litigations in July–December 20196 years of Russian aggression and war criminals whom Ukraine cannot prosecuteUkraine’s MPs leave Donbas pensioners to keep dying for their pensionsCrimean Tatar TV ATR on brink of closing because Ukraine cuts fundingAccountability for international crimes committed in Ukraine between 2014–2018Russia refuses to free 24 Ukrainian POWS despite an International Tribunal order it must obeyRussia ordered to immediately release 24 Ukrainian seamen in major victory for UkrainePutin offers Russian passports in occupied Donbas in new act of aggression against Ukraine
• Topics / Social and economic rights 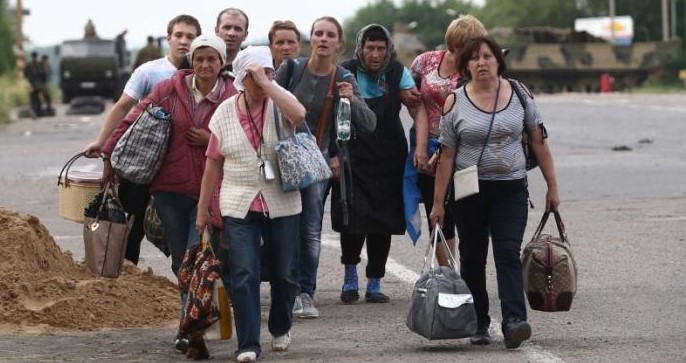 Five years after Russia invaded and annexed Crimea, Ukraine’s Pension Fund is trying to save money on Ukrainians forced to flee Crimea by collaborating with the aggressor state.  As well as providing Russia with personal data about Crimeans defending Ukraine in Donbas, the Pension Fund’s behaviour is effective ‘recognition’ of Russia’s illegal occupation of Crimea.

At the beginning of 2015, the Pension Fund arbitrarily changed procedure for assigning pensions for displaced persons (IDP) from Crimea.

According to the new rules, when the Pension Fund receives an application for pension payments from a displaced person from Crimea, it sends requests for information about whether the person has received Russian pensions.  Although the information requests are sent to Russia, the answers come from the illegal occupation authorities in Crimea.  A paper document needs to be received, with the pensions only paid after this from the moment that all payments by the Russian occupiers ended.

By December 2017, such demands for information had been sent regarding five thousand Ukrainians, and the practice is still continuing now.

The situation is absurd.  While Ukraine prohibits cooperation with the aggressor state, its Pension Fund is accepting documents stamped by the Russian-occupied ‘Republic of Crimea’.

It was reported in December 2017 that the Crimean Prosecutor’s Office was carrying out a preliminary investigation regarding possible breach of the law over unlawful collaboration between the Pension Fund and Russia’s authorities.  Either the Prosecutor’s Office found nothing untoward, which seems unlikely, or it moves very slowly, since Olha Skrypnyk, Head of the Crimean Human Rights Group, reported in February 2019 that the practice is still continuing.   She called it quite inadmissible that Russia should be handed information about Ukrainians, including those serving Ukraine in Donbas and their relatives.

“These are Ukrainian citizens and the Pension Fund has information about them.  Therefore approaching Russia’s Pension Fund is, effectively, recognizing our citizens to be citizens of the Russian Federation.  I think this is unacceptable since Crimea is Ukraine, and that is not simply in declarations.  This is a real part of Ukraine and these are our citizens”.

The Ukrainian Helsinki Human Rights Union has been working on several cases aimed at getting the Pension Fund’s behaviour declared illegal.

The situation really is urgent given the danger that people could face from the officials’ divulgence of personal data to the country waging undeclaring warfare against Ukraine.

At the end of 2017, Refat Chubarov, MP and Head of the Mejlis (representative assembly) of the Crimean Tatar people cited the example of one Crimean who had left Crimea and joined the volunteer Aidar Battalion.  He served in that battalion in Donbas until forced, for health reasons, to apply to the Pension Fund.  The latter sent all his details, including his current address, to Crimea where they were immediately handed over to the FSB.

Russia has already abducted one Ukrainian serving in the military, Oleksandr Shumkov and imprisoned him in Russia after a surreal trial in which he was effectively accused of membership of a legal organization (Right Sector) in Ukraine.  His fate and those of many other Ukrainians and some Russians who helped defend Ukraine make it quite clear that the Pension Fund could be putting people in danger through such shocking measures aimed at trying to save money.