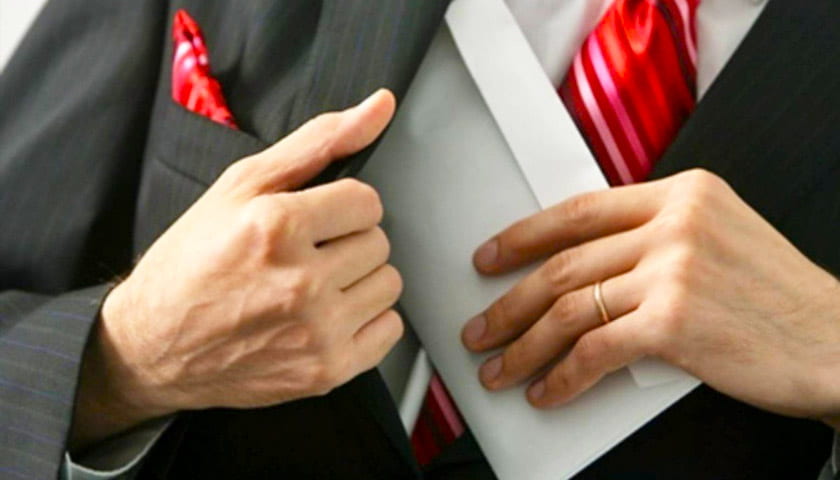 Ukraine’s National Anti-Corruption Bureau and NGOs have issued urgent warnings after an extraordinary ruling by the Constitutional Court has left 65 corruption prosecutions in danger of collapse, together with Ukraine’s faltering battle to stem corruption.

On 26 February, the Constitutional Court [CCU]  declared unconstitutional Article 368-2 of Ukraine’s Criminal Code which imposed criminal liability for “the obtaining by an individual carrying out functions of state or local self-government of significant assets, where it had not been proven that these were lawfully obtained”, i.e. illicit enrichment.  Importantly, the norm also envisaged liability where the official has handed over the ownership to another individual, with this a standard method of concealing illicit profits.

Having stated that “corruption must be combatted solely through legal means and abiding by constitutional principles”, CCU concluded that the norm criminalizing iillicit enrichment “does not meet the requirements of being clear, precise and unambiguous”, as set out in the Constitution and declared it unconstitutional.   It should be said that the same criticism can and has been made of multiple other pieces of legislation, often by NGOs at draft law stage.  Such warnings are generally ignored by legislators and the President and do not become the subject of a Constitutional Court judgement.

CCU asserts that Article 368-2 does not comply with the constitutional principles of the presumption of innocence, citing Article 62 of the Constitution which states that “no one is obliged to prove his / her innocence”  It also cites Article 63 which says that a person does not bear liability “for refusing to testify or to explain anything about himself or herself, members of his or her family or close relatives”.

The Court goes on to say that this means that a person cannot be obliged to confirm through proof the legality of the grounds for their gaining possession of assets since this means that they are forced to prove their innocence (rather than the onus of proof being on those bringing charges). The norm must also not, the Court continues, give the prosecution the right to demand confirmation through proof from an individual that they obtained assets legally if this is merely on the grounds of the absence of such confirmation.

Ukrainian President Petro Poroshenko has announced that he will be tabling a new draft law in parliament as soon as the CCU judgement had been received and analysed.  The first problem is that this will inevitably take time.  The second is, that since the judgement is not subject to appeal and has now therefore entered into force, it is likely that the 65 criminal prosecutions which the National Anti-Corruption Bureau [NABU] was involved in must now be abandoned.

The CCU judgement has been described as “a step backwards in Ukraine’s anti-corruption reforms” by NABU and as an amnesty for all corrupt officials by NGOs.

In its statement, NABU asserts that the removal of criminal liability for illicit enrichment which follows from the CCU judgement will enable officials to carry out corruption offences with impunity. From now on, it says, vast fortunes obtained from sources whose legality has not been proven will not be considered a criminal offence in Ukraine.

NABU calls the move politically motivated and in contravention of the commitments which Ukraine gave in ratifying the UN Convention against Corruption, as well as in breach of its agreements with the International Monetary Fund and EU.

NABU notes that Lithuania went through the same process of considering whether their law on illicit enrichment was constitutional.  The Lithuanian Constitutional Court found that it was, although the norm in that country was much more stringent than that in Ukraine.

NABU also suggests that the move has been influenced by fear of liability as the newly-created Anti-Corruption Court is about to begin adjudicating on cases brought by NABU and the Specialized Anti-Corruption Prosecutor, including those specifically related to illicit enrichment.   NABU itself is investigating 65 such cases, with these involving judges; prosecutors; MPs, former and current heads of state bodies.  All such elements of prosecution pertaining to illicit enrichment must now be terminated, as well as those already in court.  NABU mentions the trials of the prosecution of the head of the State Auditing Service who is accused of illegally enriching himself to the tune of almost 10 million UAH.  There are also prosecutions of a military prosecutor of the forces involved in the military conflict who is accused of almost 3 million UAH; of a judge from the Luhansk oblast, where the amount is over 13 million UAH, and the Infrastructure Minister (over 4 million UAH).

These are all amounts that are vastly in excess of the officials’ earnings, yet the CCU judgement has invoked the presumption of innocence.  None of the cases can be reinstated, NABU says, since the law is not retroactive.

A number of anti-corruption NGOs have issued a statement essentially reiterating the points made by NABU and warning that the judgement on illicit enrichment will not only mean an amnesty for all officials, but will also mean that nothing will be done about dubious assets declared over the last two and a half years on e-declarations.  This is despite the fact that liability was imposed for illicit enrichment in the current version of the law.  Such a turn will effectively mean that income declarations continue to be the farce that they were under the presidency of Viktor Yanukovych.

There is certainly a lot of debate about achieving the proper balance between ensuring an official’s right to be presumed innocent and combating corruption in situations where the illicit forms of enrichment are often next to impossible to prove.  Article 20 of the United Nations Convention against Corruption does not provide any binding commitment, but states that “subject to its constitution and the fundamental principles of its legal system, each State Party shall consider adopting such legislative and other measures as may be necessary to establish as a criminal offence, when committed intentionally, illicit enrichment, that is, a significant increase in the assets of a public official that he or she cannot reasonably explain in relation to his or her lawful income”.

Ukraine’s Constitutional Court cites this Article in its judgement as justification for ruling that such criminalization is in breach of its Constitution.   NABU and civic organizations are unconvinced.  Reaction from the IMF and other international bodies following Ukraine’s anti-corruption reform is awaited.