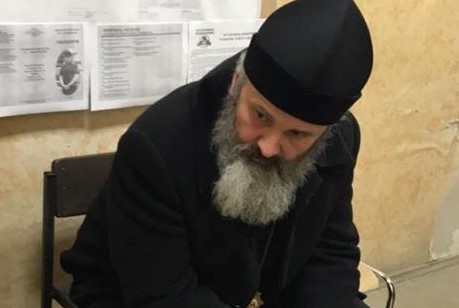 Archbishop Klyment, Head of the Orthodox Church of Ukraine in Russian-occupied Crimea was detained on Sunday morning, 3 March, and held in custody until late evening, facing two separate charges of breath-taking cynicism.  He was first accused, on the basis of an anonymous denunciation, of stealing religious items from his own church, and then, citing an equally anonymous ‘complaint’, of having used bad language at the bus station.

The Archbishop was setting off for Rostov-on-Don to attend the court hearing in the politically motivated ‘trial’ of Pavlo Hryb, a young Ukrainian student.  The court in Rostov had given permission for Klyment to visit Hryb in the SIZO or remand prison where he is being held.  He was detained by the Russian-controlled police when already seated on the coach, and taken to the central police station in Simferopol, where lawyer Emil Kurbedinov joined him as soon as he could, and, a little later, his colleague Nikolai Polozov.

The initial excuse was the bizarre claim that the Archbishop of Simferopol and Crimea had ‘stolen’ something from his own church.  This was purportedly prompted by a telephone call to the police which listed the items that Klyment was carrying, calling these ’stolen’.

Polozov writes that after several hours, they insisted on leaving together with the Archbishop, since he had not been detained and there were no grounds for forcing him to remain.  It was as they were leaving that the ‘police’ came up with the second surreal accusation of having used foul language.

It was already evening when Polozov reported that the deputy head of the Simferopol police had told the Archbishop that he was being taken to the Kievsky district police station to have an administrative protocol drawn up.  The absurd charge was of ‘petty hooliganism’, i.e. supposed bad language, and it looked for several hours as though Russia was planning to impose a period of administrative arrest which could be up to 15 days.

Although the Russian occupation regime stopped short of imprisoning the Archbishop and he was finally released, without any protocols drawn up, this is a very dangerous new move in Russia’s persecution of the Ukrainian Orthodox Church and of Klyment himself.

It comes only weeks after Klyment was forced to appeal to the international community to prevent the effective destruction of the Church which first came under attack soon after Russia’s invasion and annexation.  Klyment had earlier warned that the persecution was likely to escalate after the creation of the Orthodox Church of Ukraine with autocephaly or independent status, a move met with rage by both the Kremlin and the Moscow Patriarchate

It was the Ukrainian Church, then under the Kyiv Patriarchate, that first came under fire following annexation, not least because of its openly pro-Ukrainian position and its public statement on 11 March 2014 condemning Russian occupation of Crimea.  For understandable reasons, the Church has consistently refused to re-register under Russian legislation.

It now appears that Russia is using its customary abuse of the law for direct persecution of the Archbishop himself.

Archbishop Klyment has tirelessly defended those facing persecution since Russia’s invasion.  He was detained on Oct 19, 2016 on his return from mainland Ukraine and held for an hour.  No explanation was given, but the incident came just a week after he had addressed an urgent plea to international bodies to “take decisive measures to protect fundamental rights of Ukrainians in Crimea”.  It is no accident that this new wave of repression comes a month after the Archbishop was appointed the head of the Orthodox Church of Ukraine’s Mission to help victims of rights abuses and illegal imprisonment in Russia and occupied territories.