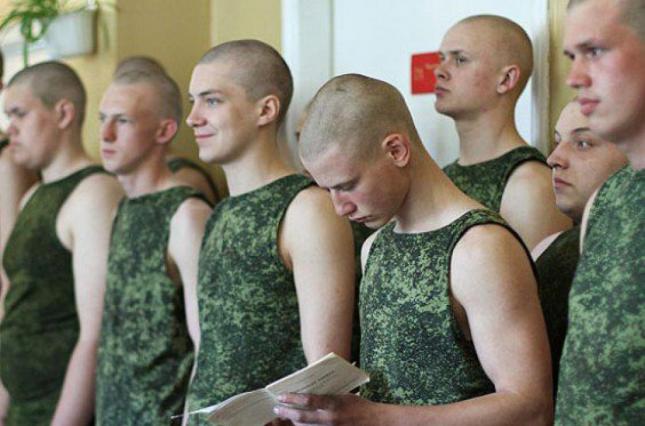 There can be many reasons why individual Crimeans have sought to avoid Russian military service.  In all cases, however, it is Russia that is violating international law by forcing young men to serve in an occupying army.

The Crimean Human Rights Group reports that over the last month, ‘Russian-controlled courts in Crimea have passed seven sentences against Crimeans for avoiding Russian military service (Article 328 of Russia’s criminal code).  Two other criminal prosecutions were initiated on the same charge.

The penalty ranges from a fine or community work for up to two years to imprisonment for up to this same period.  So far the ‘courts’ have imposed fines of 6 or 7 thousand roubles (lower than the amounts often imposed on people taking part in peaceful and legal pickets).  The problem is that such a prosecution does not stop the person being liable for conscription.  Eventually, if they continue to refuse, they will presumably face imprisonment.  CHRG notes that at least one sentence was a suspended six-month term of imprisonment.

CHRG monitoring of  ‘court’ rulings in such cases has found a minimum of 52 prosecutions since Russia’s annexation of Crimea. Each wave of conscription has resulted in an increase in the number of prosecutions.

Russia has so far conscripted around 15 thousand Crimeans.

It is worth remembering that in 2014, Russian conscripts doing military service in the Tula oblast were reported to have been forced to sign contracts allowing them to be sent to Ukraine.  Mothers of soldiers from military unit 33842 told TV Dozhd that 8 soldiers had signed themselves, while the heads of the unit had signed for the others.  While most of the known cases of men having been prosecuted for going absent without leave rather than be sent to Ukraine were contract soldiers, the measures used by Russia to impose strict secrecy make it impossible to be sure that conscripts did not face similar treatment.

Material recently submitted by Ukrainian human rights groups to the International Criminal Court included evidence that some young men have been sent to Syria as part of Russia’s military intervention on the side of Syrian dictator Bashar al-Assad.

Back in 2016, the ICC’s Chief Prosecutor concluded that Russia’s occupation of Crimea constituted an international armed conflict, one falling within its jurisdiction.  The behaviour of an occupying state is regulated by the Fourth Geneva Convention and other international documents, and expressly prohibits conscription

Article 51 of the Geneva Convention relative to the Protection of Civilian Persons in Time of War, for example, states that: “The Occupying Power may not compel protected persons to serve in its armed or auxiliary forces. No pressure or propaganda which aims at securing voluntary enlistment is permitted”.

Conscription is a major concern for many young men and their parents, and there have also been complaints that some of them have been placed under pressure to renounce their Ukrainian citizenship.  This is also a war crime, with the 1907 Hague Convention stating unequivocally that “it is forbidden to compel the inhabitants of occupied territory to swear allegiance to the hostile Power.”

It is also almost inevitable that young Jehovah’s Witnesses will be imprisoned for refusing to do military service.  At least two Crimean Jehovah’s Witnesses have been ordered to provide ‘proof of change of faith’ in order to be eligible for alternative civilian service. One young man received a summons from the Bakhchysarai military recruitment commission for June 14, 2017. The document included a handwritten demand that he present “documents confirming change of religion”.  This was after he had visited the office on June 9 and been told that he could only do alternative civilian service if he renounced his faith.  By imposing such imprisonment, Russia will be following the pernicious practice of both the Soviet and the Nazi regimes.