New Russian laws can stifle any information about environmental disasters in occupied CrimeaRussian Ombudsperson claims “public demand” for law jailing for ‘disrespect of authorities’ on InternetRussian poet convicted of ‘incitement’ for poem in support of UkraineNew offensive against Russian poet convicted over poem in support of UkraineRussian poet sentenced over poem in support of UkraineWikipedia censors poet on trial for poem against Russian annexation of CrimeaPoet labelled ‘terrorist’, flung off Wikipedia for verse in support of UkraineRussian teacher on trial for poem against annexation of CrimeaKaliningrad ’flag prisoners’ charged with insulting the veterans Moscow rejects7 years for raising flag in protest at Russian invasion of CrimeaKaliningrad FSB finds ‘deep offence’ in a German flagRussia, the improbable human rights crusaderPutin’s selective terrorismPro-Russian thugs beat up Ukrainian unity demonstrators – except on Russian TVArmed men cut off Ukrainian channels in DonbasDonetsk television station seized to provide "correct" - Russian - coverageMoscow’s “Voice of the People” in SlovyanskMurdered in SlovyanskUS journalist released, others still held hostage in SlovyanskDonbas: abductions continue as Horlivka politician found murdered
• Topics / Human Rights Abuses in Russian-occupied Crimea 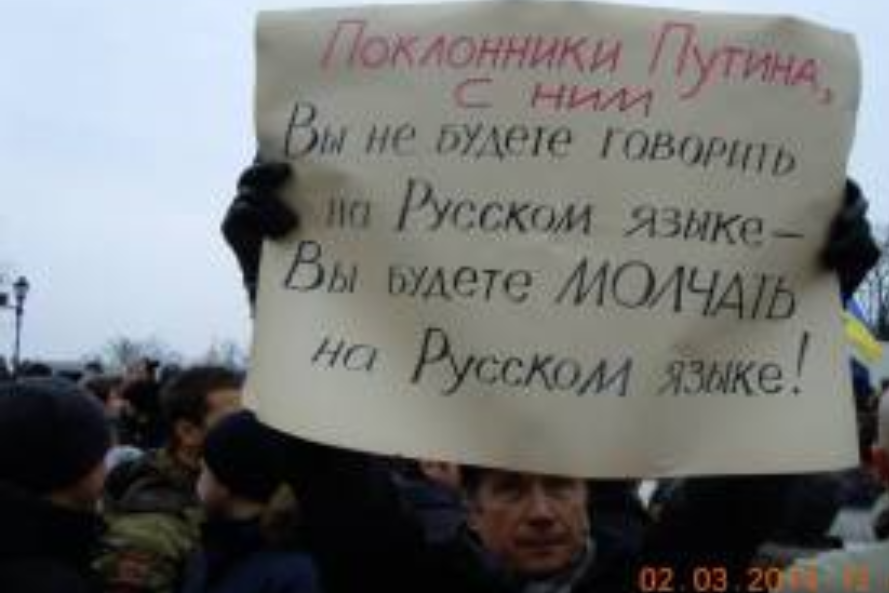 Russia has taken another dangerous step towards stifling criticism of those in power and inconvenient information.  This will have serious consequences for Crimea where freedom of speech has been under mounted attack since Russia’s invasion and annexation.

Four bills were passed in their third reading on 7 March 2019, and there is nothing to suggest that Russian President Vladimir Putin will veto them.  Quite the contrary since he recently expressed full support for the bill banning expressions of “blatant disrespect for the state”, rather vaguely suggesting that such restrictions apply in most countries.

There were initially two bills, tabled in the Duma on 12 December 2018, by an MP and two senators from the ruling ‘United Russia’ party.  It is their proposals that have now been passed, with amendments only making the penalties steeper and the scope for application broader.

Amendments are to be made to the Code of Administrative Offences, imposing fines or up to 15 days’ imprisonment for what is called “circulating information in information networks that expresses in indecent form blatant disrespect for society, the state and official state symbols of the Russian Federation the Russian Constitution and government bodies.”  The authors claimed that they were simply extending to the Internet the liability which currently exists for showing “blatant disrespect for society in public places or denigrating state symbols” (‘petty hooliganism’).  In fact, since there is no clear explanation of what constitutes such ‘blatant disrespect” it can, and surely will, mean whatever those in power choose it to mean, just as they will determine whether or not the expressions used can be called ‘indecent’.

Fines can be imposed for circulating ‘fake news’ in the media and Internet.  Just as with the norm on ‘blatant disrespect’, there is no clarity as to who determines what is ’fake’ and on what criteria.  The bill itself speaks of “knowingly false publicly important information, which poses a threat to life and / or the health of citizens and mass infringement of public order”.

If one considers that a peaceful protest that the authorities refused to allow will be deemed a ‘mass infringement of public order’, it becomes clear just how vast is the scope for abuse. The grounds for designating, for example, information about the opulent lifestyle of people in power and official corruption are likely to be official denials which are virtually never subjected to a proper check.

Application of the law will make it even easier for the de facto authorities in Crimea to conceal information about the danger to health from chemical spillages and similar.  They certainly endeavoured to hide the consequences of the disastrous spillage at the Crimean Titanium Factory in Armyansk in 2018, and this law will provide a powerful weapon against those Armyansk residents, often mothers of young children, who spoke out on social media and to the few newspapers willing to report the accident.

Russia’s censor, Roskomnadzor, will force Internet providers and site owners to swiftly block and delete any allegedly false information that gets posted.  It is, in fact, likely that the first impact of such laws will be at the level of self-censorship, where people will simply remain silent as the safest option.

The Crimean Human Rights Group is in no doubt that these new laws “will make it possible to carry out more widespread persecution, and to limit those civic activists, journalists and bloggers in Crimea who openly criticise the occupation regime and are not afraid to express their views in the press or social media”.

CHRG notes that most information reported by Ukrainian media is claimed by the occupation regime to be inaccurate.  The NGO has been receiving threats from Roskomnadzor since May 2018 over material regarding Russia’s illegal imposition of military service in occupied Crimea, and thirteen texts have been placed on Russia’s notoriously long list of prohibited materials.

Any illusions that the truth will be regarded as inviolable should be discarded.  Under the current regime, politics reigns over history, as was seen when Vladimir Luzgin’s conviction by a Siberian court for reposting a text which mentioned that the Soviet Union had invaded Poland in 1939, was upheld by Russia’s Supreme Court.

Since the bills were first tabled, the proposed fines have increased exponentially. CHRG notes another very ominous change.  If initially, the bill envisaged prosecution for circulation to an unlimited number of people, that specification was removed.  It would now be sufficient to have posted something in a closed social media group for a person to be subject to charges.

There have already been prosecutions of Crimean Tatars on spurious charges of ‘insulting a police officer’ and a Russian, Viktor Kotov, may be facing criminal charges of ‘calls to terrorism’ for an article in which he called for the release of Ukrainian political prisoner Oleg Sentsov.  When reality is so turned on its head, it is easy – and frightening – to envisage the abuse likely from administrative norms with elastic and undefined terms like ‘indecent form’ and ‘disrespect to the state and authorities’.