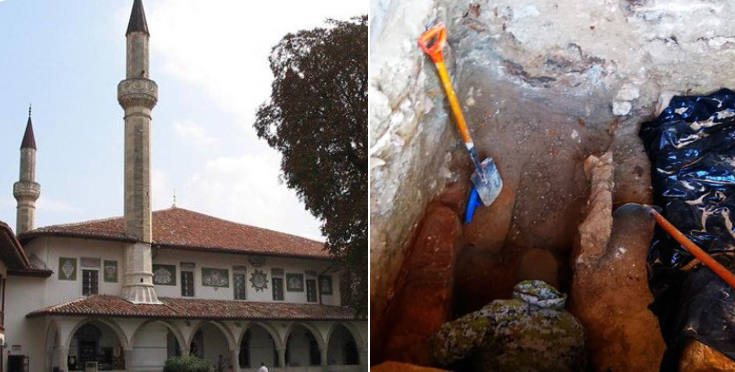 Video footage has shown new details of Russia’s wanton destruction of the Khan’s Palace in Bakhchysarai, with ordinary workers carrying out ‘excavation’ work, without any attempt to record and preserve artefacts found.

Edem Dudakov, the former head of the Crimean Committee on Inter-Ethnic Relations and Deported Peoples, explains that this ‘excavation work’ is being carried out around the Big Khan Mosque, the Khan Cemetery and the Stables.  It is evident that the worker videoed is no archaeologist or, indeed, expert of any kind, and he is simply dumping artefacts, including tiles of immense historical significance, in a pile with no attempt to photograph them and ensure their preservation.

Dudakov is quite certain that the Moscow firm who won the tender for this work are using cheap local labour, without any expertise. training or understanding of the significance of the place they are digging up, with a spade, as though it was a field of potatoes.

In an interview to Krym.Realii, Dudakov pointed out that such workmen, armed with spades, could either damage valuable artefacts or simply not recognize them, and dump them, together with other rubble.  They can also do immense damage to unique historical structures, such as the gravestones, some of which have already ended up submerged in rubble from this ‘excavation’.

Dudakov assumes that there was no special tender for the excavations, with all of it treated as part of the ‘reconstruction’ project.  This is indeed the impression from a propaganda film shown on the Russian-controlled Millet channel, which talks about a “restoration season”, with new ‘finds’ all the time.

While the film speaks of three thousand artefacts having been found, there is nothing to suggest that any archaeological register is being kept, and no information about what is later done with these artefacts.  Elmira Ablyalimova, the former Director of the  Bakhchysarai Historical, Cultural and Archaeological Museum-Reserve, stresses that any such work needs to be carried out under the supervision of experts, yet there is nothing here that would indicate that anybody is following what is happening.  Dudakov adds that any items found should be recorded on video and that excavation work in the cemetery should be carried out in the presence of an Imam and with the permission of the Muftiat.

Instead there is a labourer with a spade.

There is also nobody to be held to answer for the fate of priceless artefacts which are likely to be plundered, as, almost certainly, were the historical Tatar roof tiles that were replaced with Spanish factory-made tiles.

The full scale of the danger to the complex came just over a year later, as the first photographs emerged of what this Russian ‘restoration’ was all about.

It became clear that the so-called restoration work had been passed to a construction firm called Kiramet, working for the Moscow-based Atta Group Architectural and Planning Holding as General Contractor.  Neither company had any experience of restoration, which is presumably one of the reasons why the design was kept secret.  There was, and remains, no information as to whether the mandatory expert assessment was carried out, and if so, by whom.

The occupation regime has closed the territory off to the public, however concern was high and people did manage to get in and photograph the damage underway. They found parts of 16th century walls having been broken off and authentic stones left lying around as though rubble. As mentioned above, all the original tiles had been removed and were packed away, almost certainly to be used for the occupiers’ villas.  Details can be found here and here.

Attempts by activists and by lawyer Nikolai Polozov to obtain copies of the documents for this alleged ‘restoration’ were constantly rejected.  Late in 2018, however, it became clear that a St Petersburg company had also won a tender for the work.  The company in question, called ‘Meander’, has won a suspicious number of high-cost tenders for supposed ‘restoration’ of many places of cultural heritage currently under Russian occupation.  The reason has nothing to do with expertise or experience, and is probably because the suspected real owner is Russia’s culture minister Vladimir Medinsky (details here).

The Khan’s Palace was placed on UNESCO’s World Heritage Tentative List back in 2003, although the follow-up work had not been carried out at the time of Russia’s invasion and annexation in 2014.

Russia’s destruction of the Khan Palace will be added to Ukraine’s case against Russia in international courts, however the devastation has already been immense and is continuing, so now court case in the future can save this vital monument of huge historical and cultural significance.  Hopes that UNESCO would intervene have thus far come to little, although a report from the UN body is due in October regarding UNESCO’s monitoring of the situation with all cultural heritage in occupied Crimea.