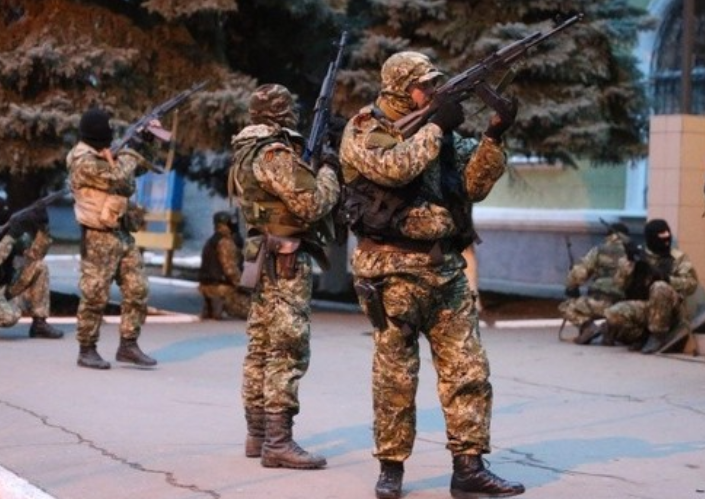 A Russian who fought in Donbas and openly called the conflict a war to destroy Ukraine and Ukrainians has provided a valuable piece of evidence outlining Russia’s direct military engagement in eastern Ukraine.

Alexander Zhuchkovsky arrived in Sloviansk in April 2014, with former Russian military intelligence officer Igor Girkin (Strelkov) and his people.  Later, after they were driven out of Sloviansk, Zhuchkovsky remained in Donetsk, helping militants from the self-proclaimed ‘Donetsk people’s republic’ [DPR].

Back in November 2016, journalist Denis Kazansky noted that Zhuchkovsky, who holds overtly Nazi views, was a refreshing exception in that he didn’t even try to pretend he was in Donbas to ‘defend the peaceful population against a Kyiv ‘junta’.  This and similar lines assiduously pushed by the Kremlin were regularly repeated even by people who had evidently gone to Donbas as mercenaries. Zhuchkovsky, however, spoke of the war being aimed at destroying Ukrainians because their existence as a separate people is not in the interests of the Russian people.  While the post was later deleted (as being too “cannibalistic”), a screenshot is given of the VKontakte post in question.  This, Kazansky suggests, should be shoved in the face of anybody who ever bleats about the conflict in Donbas being a supposed ‘civil war’.

Zhuchkovsky makes it quite clear that “we are fighting with Ukrainians.  Not ‘good Ukrainians vs. bad Ukrainians”, but Russians vs. Ukrainians. Full stop. . “

If the militants were genuinely in Donbas to “fight fascism”, Kazansky noted, they would have first turned their attention to Zhuchkovsky.  He has, however, remained untouched, and the reason is that “nobody in Donetsk is really fighting fascism. They are fighting Ukraine and Ukrainians whom they want to destroy.”

Worth noting also that the Russian FSB, which regularly brings absurd charges against Crimean Tatars in occupied Crimea or against Russians for mild political criticism or similar on social media, also clearly found nothing wrong with Zhuchkovsky’s call to murder Ukrainians en masse.

Zhuchkovsky and those like him are certainly repugnant, but do not necessarily provide sufficient evidence to incriminate Moscow which has stubbornly pushed the line that any Russians found fighting in Donbas are ‘volunteers’.  Fortunately Zhuchkovsky has just written a book in which he leaves no doubt at all about Russia’s role in the conflict.

Kazansky believes that ’85 Days in Sloviansk’ is the first such open description of Russia’s role in unleashing and carrying out military action in the east of Ukraine.  It has come from a person who cannot be suspected of pro-Ukrainian views and who has no reason at all to lie.

Girkin and his men first seized control of official buildings in Sloviansk on 12 April 2014, swiftly gaining control of the entire city. Although it was claimed that these were local Donbas men, the chilling similarities with the seizure by Russian soldiers of Crimea (which Girkin was also involved in) were noted with dread both in Ukraine and abroad.  .

Zhukovsky notes that Girkin had accurately predicted that the so-called ‘insurgents’ would be crushed and cut off from the Russian border.

Zhuchkovsky mentions that Girkin (whom he refers to everywhere by his nom de guerre Strelkov) was forced to leave Donbas on 15 August.  He says only that this was seemingly a condition for Russia’s military ‘assistance’ without mentioning that the presence of Girkin in particular, but also other prominent Russians leading the so-called ‘Donetsk republic’ had become particularly inconvenient for Moscow after the downing of Malaysian airliner MH17 using a Russian BUK missile.

Russian President Vladimir Putin met with 50 ‘Russian journalists’ at a closed meeting in the Kremlin, Zhuchkovsky says.  These alleged ‘journalists’, including people working in Donbas, are supposed to have pleaded with Putin to send in Russian troops to Ukraine.

“Russia gave military assistance, the Ukrainian forces were pushed back from the Russian border, hundreds of Ukrainian Armed Forces soldiers ended up encircled… “  It is clear that by military assistance, Zhuchkovsky does not mean only the weapons and other supplies that Russia was supplying in quantity, but military forces.

His words confirm the constant reports from Ukrainian sources, including the men taken prisoner, that they found themselves pitted against Russian military.

Kazansky points out that the figure cited by Zhuchkovsky of one and a half thousand fighters in the so-called ‘DPR’, of whom around half were not local (mostly Russian mercenaries, though some others), indicates that the militants did not have strong local support.   In trying to justify their retreat from Sloviansk,  Zhuchkovsky makes it clear that heavy weapons, etc. were coming from Russia back in May and June, with only a small part of them reaching Sloviansk.  This ‘small part’ still included around 10 convoys with military technology and weapons.

The militants themselves claimed that they were using weapons found after seizing police or SBU [Ukrainian Security Service] or left by retreating Ukrainian military, and Russia claimed to the UN International Court of Justice in March 2017 that weapons and technology were “found in Donbas mines”.  Zhuchkovsky instead notes that such ‘trophy weapons’ and ammunition had run out by the middle of May.  After that they came “from outside”, meaning Russia.

The other confirmation that this was no ‘civil war’ comes in the section about Girkin being forced to ‘shed his mask’.  Like in Crimea, he had wanted to work in secret, behind a local leader as a front.  The command from Moscow to remove his mask came towards the end of April, and that made Girkin and the others realize that “something had gone wrong” and that this was not going to be another annexation like Crimea.

In fact, the attempts to find such a local level had begun a lot earlier.  Certain Ukrainians, with pro-Russian and, generally, far-right views, had earlier received training in Russia.  When it came to it, however, these individuals – Pavel Gubarev and some others, were unable to pull anything off alone, and Russian thugs were sent across the border.  Demonstrations, like the one in Donetsk on 13 March 2014 turned ugly as a consequence of the thugs, and resulted in the first death (of 22-year-old pro-Ukrainian unity protester Dima (Dmytro) Cherniavsky.  Even the thugs, together with pro-Russian activists were unable to bring about a seizure of power, and that was when Girkin and other Russians were sent in, once again ‘without insignia’ and pretending to be locals.

“There wasn’t anybody who was ready to begin a war before the Russians came. This opinion is expressed in Zhuchkovsky’s book several times”.

With the tapes of conversations with Putin’s senior Adviser Sergei Glazyev showing the scale of efforts and the money expended by Russia to bring about ‘uprisings’ in Ukraine, such admissions from a Russian fighter should not be ignored.