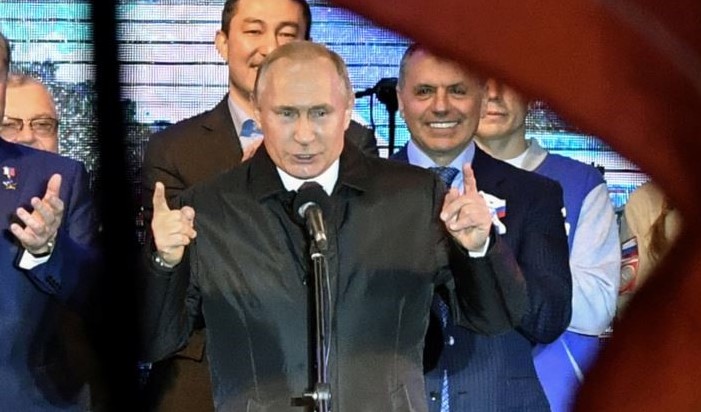 Russian President Vladimir Putin has used the fifth anniversary of Russia’s invasion and annexation of Crimea to launch the two power stations built with Siemens turbines, in contravention of international sanctions, and to wax eloquent about the increase in ‘patriotism’ throughout Russia over the last five years.  Putin’s promises of future prosperity were extremely vague, unlike the hard statistics from Bloomberg regarding the 150 billion dollars that Russia has lost since annexation and an economy that is six percent weaker due to sanctions.

Small wonder that Putin preferred to talk about ‘patriotism’ and ‘being together’ during a concert in Simferopol. “The events five years ago not only led to an unbelievable surge in patriotism throughout Russia, but also showed us the huge force of truth and justice. It was precisely for that reason that Russia opened its arms, its heart and soul and with joy and delight accepted you into its huge multi-national family.  We have done a lot during the last five years, but we need to do much more <> We have the main condition, namely that we are together!”, Putin said.

The over 50 Crimean political prisoners, their families, and the tens of thousands forced from their homeland would differ in their assessment, as does the international community.

In fact, it looks very much as though the initial ‘Crimea is ours’ euphoria after Russia’s land-grab has faded and many Russians are also sceptical.  Bloomberg cites a survey which found that, if in December 2014, 67% of Russians thought that annexation had done more good than harm, only 39% now think this.

In a TV interview on 18 March, Mustafa Dzhemilev, veteran leader of the Crimean Tatar People and Ukrainian MP, said that he is sure that Putin and those around him know that the seizure of Crimea was a mistake, though he will not admit it.  Backing down now, he says, would be suicide for him.

Dzhemilev believes that Putin seriously miscalculated, assuming that the West would swallow this latest act of aggression as it had Georgia (in 2008).  He does note, however that Russia was hoping to destabilize the situation and bring somebody like former pro-Russian Ukrainian President Viktor Yanukovych to power.  He cites US intelligence in asserting that up to 30% of the people in all power structures in Crimea were in fact Russian FSB or GRU [military intelligence].

Although Dzhemilev does not mention this, it is likely that the unwaveringly pro-Ukrainian position taken by the Crimean Tatars, the main indigenous people of Crimea, was enormously instrumental, firstly, in ruining Putin’s plans for a covert coup d’etat and secondly, in preventing the West from quietly accepting Russia’s annexation.   It was the  Mejlis or representative assembly of the Crimean Tatar People who called on all Ukrainians to come to the Crimean parliament on 26 February 2014, thus preventing a ‘vote’ to change Crimea’s status.  Russian soldiers without insignia, flanked by Russian and pro-Russian paramilitaries, seized control early the next morning.

Putin’s attempts to woo Dzhemilev himself and the Crimean Tatars in general failed abysmally, and just over a month after the 18 March  ‘formal’ annexation. Dzhemilev had been banned from his homeland, with the first acts of repression following soon afterwards.

Crimean Tatars have since been the main victims of repression, and make up a disproportionate number of Russia’s Ukrainian political prisoners.  One of the most notorious political trials, of Akhtem Chiygoz, Deputy Head of the Mejlis, and five other Crimean Tatars, was over the pre-annexation demonstration which had scarpered the Kremlin’s plans. The number of ‘Mejlis victims’ has also increased, and Russia is continuing to flout an order from the UN International Court of Justice to withdraw its extraordinary ban on the Mejlis itself.

It has been noticeable over the last month that formerly pro-Russian journalists / bloggers, like Yevhen Gaivoronsky, have come out with statements suggesting that they now think they were mistaken.  Gaivoronsky, who was recently the target of an FSB search, has even said that people now want to ‘return to Ukraine’.  It is probably not unconnected that several pro-Russian bloggers and former politicians were detained on 18 March.

None of this was, of course, allowed to disturb the carefully staged events to mark the fifth anniversary of annexation.  This was not the first time that Putin has arrived for propaganda trips, with the formal pretext being the launching of two power stations which was made possible by the gas turbines which, for some 18 months, the German company Siemens pretended it did not know were headed for Crimea.  This was a shocking method of bypassing sanctions which has yet to receive an adequate reaction from the German prosecutor.

After formally launching the two power stations, Putin claimed that this was now an end to Crimea’s energy problems.  He was understandably silent about the ongoing water issue which is becoming increasingly acute.  Crimea is not, as Russian politicians have tried to claim, part of Ukraine because of a political whim (or because Ukraine ‘annexed it’!).  The peninsula was always dependent on mainland Ukraine for water, power and other supplies.

Ukrainian political analyst Olesya Yanko is convinced that the Kremlin needs the new power plants not for the development of Crimea, but to expand its military base.  Power was doubtless required simply to keep things running, but it is certainly true that all the promises to develop Crimean infrastructure, to create a ‘gambling paradise’, etc. have remained mere words.  The main areas of expansion have been linked with Russia’s increasing militarization of Crimea and creation of infrastructure for large numbers of FSB, Russian National Guard and other enforcement bodies who are not there to welcome Crimeans “with joy and delight”.