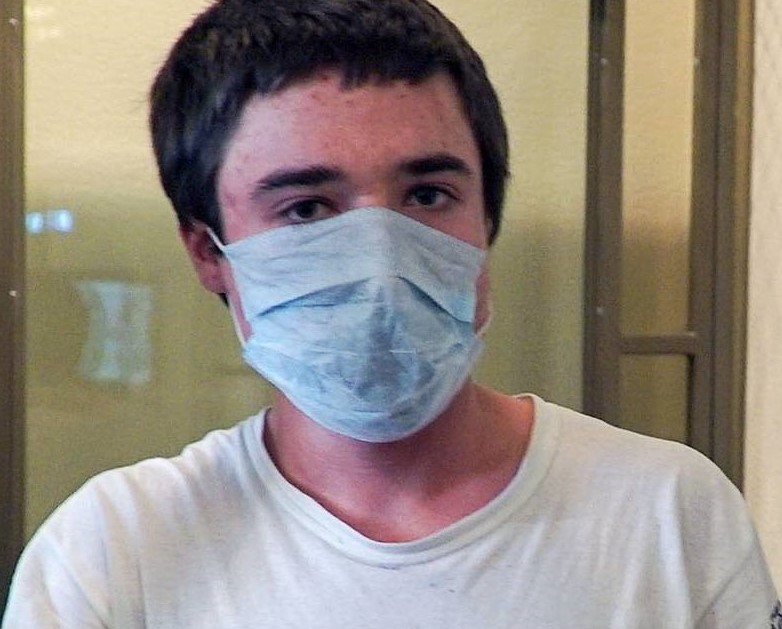 The Northern Caucasus Military Court in Rostov-on-Don has taken just minutes to pass a six-year sentence on Pavlo Hryb, Russia’s youngest Ukrainian political prisoner.  This was exactly the sentence demanded by the prosecutor during the ‘court debate’ yesterday, 21 March.  Both the prosecutor and the judges have not only ignored Russia’s illegal abduction of the young man and the lack of any grounds for the charges against the young man, but also the fact that his medical condition means that he should not be in detention at all.  The fact that the sentence is in an ordinary regime prison colony means little when the young man needs specialist medical treatment which he cannot get in any Russian prison.

Hryb is in constant pain and suffering nausea, yet even after an ambulance needed to be called on Thursday, the court hearing was still resumed.

On the eve of this sentence, Hryb gave his final address to the court, with this translated from Ukrainian by an interpreter.  He dismissed the charges against him, and called the FSB officers “bandits and killers”.   Importantly, he made reference to his abduction, saying that nobody could have imagined that Belarus, from where he was abducted by the FSB, was so dangerous.

Judging by the video footage of his address, Hryb had planned to say a lot more, explaining, for example, what had really happened, but was probably feeling too ill to continue.

He ended by wishing that all Ukrainian patriots endure captivity with dignity, in accordance with the truth and their conscience, and then “Glory to Ukraine!  Glory to the Ukrainian nation!”

Hryb was, reportedly, able to briefly talk with his mother before the hearing, and also spoke for a moment with the journalist present from HromadskeTV.  Asked how he was feeling, he answered “rotten”, and explained that he is simply ignored when he complains about his health. He added that since the previous hearing, when he had fallen ill, nobody had done anything to treat him. “They bring me here and say that I’m healthy”  He insisted that he was not in a state to endure the hearing, speaking of pain and nausea.

He had been taken out of his cell in the morning, he said, but simply left in a room, which he understood to be so that they could rummage through his papers and notes for the hearing.

It should be stressed both that Hryb’s medical issues are placing his life in danger, and that the Russian prosecutor and court have been fully informed of this.  The court finally agreed at the beginning of February to call Dr Vasyl Prytula, Professor of the  Faculty of Paediatric Surgery at the Bohomolets National Medical University, who has been treating Hryb since the latter was a small child.  It cancelled one hearing, after Prytula had come all the way from Ukraine, but did finally hear him explain just how critical Hryb’s state of health is and how important it is that he has a specialized operation.

There are three shocking aspects to this case, and it is simply not possible that the ‘investigators’, prosecutors and the judges at the Northern Caucasus Military Court in Rostov are not aware of all of them.

Unlike Russia, the European Court of Human Rights reacted to this situation soon after Hryb was abducted on 24 August 2017, and taken to Krasnodar in Russia.  They demanded information from the Russian government regarding Hryb’s state of health and the treatment he has received.  It appears that the Russian authorities essentially falsified the medical records, in order to not admit the scale of the problem and the fact that they were doing nothing about it.

Dr Prytula noted back in 2017 that Hryb needed a portosystemic bypass as part of his treatment, and the operation had been scheduled for September that year.  The need is now acute. In December 2018,  Prytula issued an opinion on the basis of readings taken at a consultative clinic in Rostov.  Among other issues, he found that Hryb’s portal hypertension, hypersplenism, including enlargement of the spleen, were developing, and that he was now suffering from liver cirrhosis and reduced ability for blood coagulation (heightening the threat of blood haemorrhages).  He wrote that it was possible that Hryb is suffering from an inflamed ulcer in the colon or stomach.  This can only heighten the danger of haemorrhaging in the digestive tract, stomach or duodenum, with any of these posing “a critical danger to his life”.  He stressed that people with Hryb’s diagnosis need to be treated in a high-level specialist hospital.  The court was told at the last hearing that the illness was developing rapidly and that Hryb needed an operation at a specialist clinic, either in Moscow or in Berlin.

Instead, Russia is simply denying that there is a problem, and flouting the European Court of Human Rights which ordered that Ukrainian doctors be allowed to examine the young man.  All of this is placing Hryb’s life in danger.

The Belarusian authorities have tried to deny any involvement, however this is also impossible to take seriously since Hryb could not have been taken across the border into Russia without their knowledge.

In February 2019, the court ordered that a check be carried out into Hryb’s allegations after viewing a video showing injuries which he says were caused by having his hands bound for a long time in fishing line.

Although there is a staggering difference between the FSB’s account and Hryb’s, with the young man’s story backed by material evidence, including his ticket back from Gomel, any such probe is unlikely to achieve anything.

Hryb is charged under Russian ‘terrorism legislation’ with inciting the young Russian girl, (Tatyana Yershova), who was then still at school,  to prepare an explosive device to detonate during a school assembly. This is alleged to have been at the instigation of another Ukrainian, Stefan Kapinos, with whom Hryb shared an account on VKontakte.

Nor did the FSB themselves, despite having supposedly discovered such a plan, do anything.  Yet on July 4, they allegedly launched a criminal investigation, with this involving a search of the young Russian girl’s flat.   By July 28, the FSB had designated Hryb as the ‘accused’ in this story, and they then set about intimidating the young girl into persuading Hryb to meet her in Belarus, from where he was kidnapped and taken to Russia.  She told Ukrainian journalists then that the FSB had told her that if she didn’t cooperate, they would charge her with terrorism.  Unfortunately, during this cynical trial she has not found it in her to tell the truth.

This is undoubtedly a political trial, with many of the same elements as others since the beginning of Russia’s aggression against Ukraine.