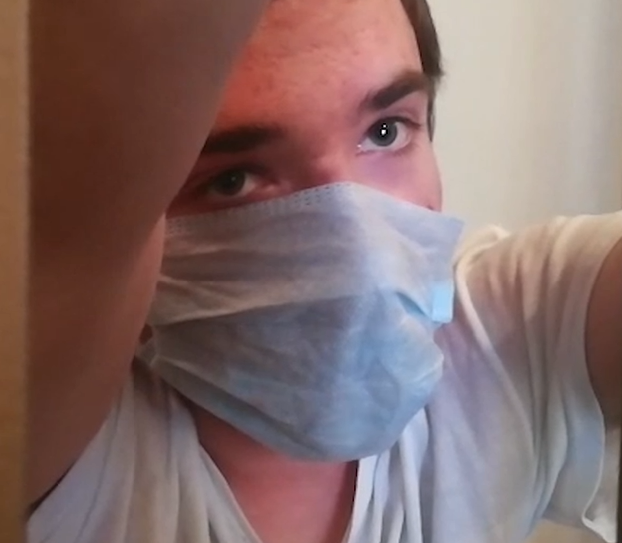 Pavlo Hryb, the Ukrainian student whom Russia abducted from Belarus, has been moved to a solitary ward with 24-hour surveillance and medical supervision after formally declaring a hunger strike.  This is the closest Russia will have got to providing medical care for the young man, and it is typical that it needed a desperate measure which places Hryb’s life in immediate danger, given his weak state of health.  Hryb’s father has repeatedly warned that his son will die if not allowed an operation, almost 18 months overdue, which can only be carried out in specialist hospitals. He explains that Hryb’s mother had visited their son in prison and tried to dissuade him from the move, but to no avail.  Hryb is now only drinking water.

Hryb first mentioned the hunger strike on 23 March, immediately after being sentenced to six years’ imprisonment on concocted charges by the same North Caucasus Military Court which has sentenced Ukrainian filmmaker Oleg Sentsov and many other Ukrainian political prisoners.  A Caucasian Knot correspondent reports that Hryb was visited that day by members of the Rostov Regional Public Monitoring Commission.  They reported then that Hryb was only rejecting prison food, though was eating the food items his family sends him.

If this was true then, it is clearly not the case now and the same commission members reported on Monday, 25 March, that Hryb had formally informed the SIZO [remand prison] administration that he was on hunger strike.

Hryb’s demand that he be examined by independent doctors has long been seconded by the European Court of Human Rights and the international community.  There were strong messages of condemnation of his sentence from the EU, the US State Department and a number of countries.  The EU Spokesman stated clearly that Hryb had been abducted from Belarus, and “illegally detained in Russia without any substantiated charges”, and stressed that he “suffers from a disabling and serious medical condition”

Any hope Russia had that its use of ‘terrorism charges’ would ward off criticism was unfounded.  A spokesperson for the US State Department said that Hryb had been “targeted for opposing Russian aggression against Ukraine.  The UK’s Foreign Minister Jeremy Hunt in his turn wrote that “Russia’s continued use of politically motivated detentions is appalling”.  All have demanded Hryb’s release.

The situation has now become critical.  Russia forced Sentsov to end his hunger strike after several months by making it quite clear that refusal would result in forced feeding.  In Hryb’s case, the 20-year-old is in such ill health that even a few days without food could cause a dangerous exacerbation of his condition and, for example, cause life-threatening haemorrhaging.  Hryb’s parents are not alone in warning that this monstrously cynical 6-year ‘sentence’ is to all intent and purposes a death sentence.

It cannot be said that any of the shocking aspects of this political case are strictly new.  Hryb is not the first Ukrainian whom Russia has abducted since the beginning of its aggression in 2014, nor the first whose life has been placed in danger, and monstrously falsified charges have been laid in most of the cases involving political prisoners held in occupied Crimea or Russia.

The present situation remains deeply disturbing given that Hryb was just a teenager when abducted, with force, from Belarus and thrown into a Krasnodar SIZO.  It is just conceivable that the FSB officers who first fell upon the idea of using correspondence between Hryb and the then Russian schoolgirl, whom he believed himself in love with, did not realize the severity of the young Ukrainian’s medical problems.  These would, however, have become clear almost immediately after his seizure on 24 August 2017, yet Russia has continued jeopardizing the young lad’s life and health.

Hryb, who was just 19 in August 2017, had been persuaded to go to Gomel in Belarus on Ukraine’s Independence Day to meet with his Russian ‘girlfriend’ Tatyana Yershova.  It is, in fact, likely that the final letters which claimed to be from Yershova, were written by the FSB who had threatened the young girl with terrorist charges if she refused to ‘cooperate’.

Hryb was seized by FSB officers and taken, by force, to Russia where he was charged with having incited Yershova to commit ‘an act of terrorism’ by preparing an explosive device to detonate during a school assembly. This is alleged to have been at the instigation of another Ukrainian, Stefan Kapinos, with whom Hryb shared an account on VKontakte.

Hryb’s lawyer Marina Dubrovina has explained that the correspondence between the two teenagers was not provided in the original Ukrainian, but in a supposed translation into Russian.  Given that the entire prosecution was based on these supposed words, it is telling that the FSB would not provide the original.

There is also nothing to back the FSB’s claim that Hryb was seized in the Smolensk oblast of Russia.  Quite the contrary, since Ihor Hryb travelled to Belarus as soon as he understood that his son had disappeared, and sounded the alarm almost immediately.  The court was also shown Hryb’s return ticket to Ukraine from Belarus.  All of this was ignored by the panel of judges who also heard, but refused to heed the clear warning from Vasyl Prytula, the medical specialist who has been treating Hryb since the latter was a small child.  Details of his sombre warnings regarding Hryb’s condition can be found here.

An appeal has already been lodged against the six-year sentence, however this was a political trial and the outcome of any appeal will be equally determined at a higher level.   With the verdict on 22 March being effectively a death sentence, it is vital that maximum publicity is given to the squalid illegality of this abduction and ‘prosecution’ and attempts made to put pressure on Russian President Vladimir Putin to release him (and other political prisoners) before it is too late.