Ukraine needs real debates between Poroshenko and Zelenskiy – candidates are not “colouring books”Bombshell PrivatBank ruling and other disturbing moves on the eve of Ukraine’s presidential electionsZelensky appoints Kolomoisky lawyer with shady past to head his AdministrationPresident-Elect Zelensky and Multiple Questions Still UnansweredRussia confirms plans to annex occupied parts of Zaporizhzhia and Kherson oblasts“We’re not celebrating today” – digest of Russian protests (early June 2022)Even in Russia, Putin’s ‘denazification’ claims prove no excuse for war against UkraineRussia is forcibly ‘mobilizing’ Ukrainians from occupied territory to fight its war against Ukraine Fake ‘referendums’ at gunpoint planned to try to ‘legitimize’ Russia"s invasion of Ukraine Chief Rabbi of Odesa: “Ukraine is the safest country in the world for Jews” Russia has already greatly surpassed the Nazi Third Reich by insidiously launching missile and bomb attacks on UkrainePutin ramps up aggression against Ukraine through so-called ‘Russian citizens’ in occupied Donbas Putin’s new law envisages annexing other countries" territory as grounds for Russian citizenshipUkraine’s ex-President Poroshenko accused of ‘treason’ and ‘financing terrorism’Over 50% of Ukrainians willing to take up arms or otherwise resist further Russian invasion of Ukraine With Russia waging war against Ukraine, ask Zelensky why he wants impunity for war criminals 400 Ukrainians imprisoned without a crime in Russia, occupied Crimea and Donbas Russia blocks OSCE conference when prevented from spreading disinformation about occupied Crimea and Donbas Neo-Nazi Russian nationalist exposes how Russia’s leaders sent them to Ukraine to kill UkrainiansGravely ill Crimean Tatar political prisoner beaten by staff in Russian prison hospital
• Topics / Elections
• Topics / Human Rights Abuses in Russian-occupied Crimea 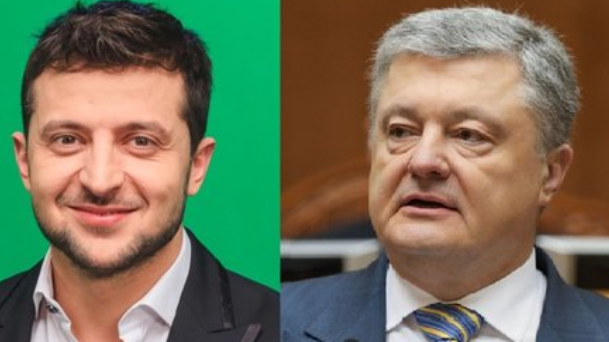 If the exit polls are right, Ukrainian President Petro Poroshenko will be competing with the winner of Sunday’s first round, Volodymyr Zelensky for the presidency. It remains to be seen what will be discussed in the coming debates, but one subject should certainly receive more attention than it has thus far, especially in the light of the mass arrests which Russia carried out of Crimean Solidarity rights activists on the eve of the elections.  While the subject may not be a vote-winner, and Zelensky is not alone in having no idea how to return Crimea, there are questions which the next President of Ukraine must be willing to confront.

According to a study carried out by the Centre for Journalist Investigations, 14 of the 39 candidates competing on 31 March did not mention Crimea at all in their election programs.  Others wrote general words that gave no explanations nor commitments, avoiding the issue of how to end the occupation of Crimea, the legal status of occupied territory, as well as guaranteeing the rights of the Crimean Tatar people to self-determination in their homeland.

Of the three candidates who gained the most votes on Sunday (the third being Yulia Tymoshenko), only Zelensky does not mention Crimea directly in his program at all.

On the subject of occupied territories in general, his program reads:

“We will put the question of support for Ukraine in its wish to end the war, return temporarily occupied territory and force the aggressor to compensate the damages caused before the guarantors under the Budapest Memorandum and EU partners. Giving up our national interests and territory cannot be the subject of any negotiations”.

In an interview to ICTV, Zelensky named strengthening of diplomatic negotiations to end the war as one of the main directions he would follow if elected. He believes that negotiations are needed with Russia, but only on condition that the EU and USA are present.  “All that we have are the Minsk Accords, however they don’t work, they need to be broadened”.  He spoke of bringing in international peacekeepers to the demarcation line without addressing the issue of the peacekeepers’ scope and Russia’s opposition to any scope that would make their role meaningful.

He suggested two general roads toward reintegration of occupied territory.  The first is “to launch a serious information war and win it”, with people living in such areas fully understanding that they are Ukrainians.  This would include, he say, “a powerful international channel, in Russian, which would show the truth about Ukraine. He did not explain the means by which attempts, which can be guaranteed by Russia or their proxy ‘republics’, to block this channel would be overcome. If one is to require satellite TV to watch such a channel, its uses would be primarily for viewers in western countries.

Zelensky spoke of how people living on occupied territory should be paid their pensions.  He did not go into any detail as to how.

Although the information war was supposed to cover Crimea, as well as Donbas, Zelensky says flatly that Crimea will return to Ukraine only once there has been a regime change in Russia, and that he doesn’t know what can be done until then.  He claimed that Poroshenko had asserted that he would return Crimea as soon as he won the elections, though this, one of the interviewers pointed out, was not quite accurate.  The President had said that he would undertake steps towards ending occupation after the elections.

Neither Zelensky, nor Poroshenko, even mention, let alone proposing to abolish, the shocking law on creating a free economic zone in Crimea which should never have been passed.

Since Crimea is so emphatically not part of Zelensky’s program, it is probably not surprising that he did not answer the Centre’s questions on Crimea, nor those put by the Human Rights Agenda Coalition of Human Rights NGOs.

The same can be said for the other main candidates, including Poroshenko, however the latter’s program, according to the Centre’s analysis, was by far the longest on the subject of Crimea.  It includes the following:

International sanctions against the aggressor state must be contingent upon Ukrainian Donbas and Crimea being fully de-occupied.

Continuation of the policy of seeking restoration of Ukraine’s territorial integrity; the return of occupied Donbas and Crimea through political and diplomatic means; ensuring a united pro-Ukrainian coalition in the world, using sanctions and the mechanism of the UN monitoring mission throughout occupied Donbas.

There must be liability for the persecution and torture of Ukrainians on occupied territory and for losses incurred, with the use of international legal mechanisms to achieve compensation.

The program does not mention support for the creation of a Crimean Tatar national territorial autonomy, although Poroshenko has, in the recent past, suggested that he would support this (details here).

While it is true that the program, and Poroshenko’s promises regarding steps towards an end to occupation after the elections, are short on specifics, they do at least commit to treating the issue as one of importance.

In its analysis, the Centre suggests that Poroshenko may have come to some agreement regarding Crimean Tatar national autonomy with veteran Crimean Tatar leader, Mustafa Dzhemilev and Refat Chubarov, Chair of the Mejlis or representative assembly of the Crimean Tatar people, both of whom are MPs (from the Poroshenko Bloc).  While that may be one reason why the Mejlis has publicly supported Poroshenko, it need not be the only one.  If success is measured only in terms of whether Russia’s occupation has been stopped, then, indeed, there is none.  It is, however, true, and to a large extent thanks to Ukrainian efforts, that the international community’s attitude has not softened over the last five years, nor have sanctions been removed.   There have been a number of important resolutions and reports, requiring serious lobbying, which make Russia’s position even more untenable and which highlight the grave rights abuses and victims of persecution..

What part the President’s Administration played in such limited progress can be argued, however even that would surely be in question if the next President assumes that nothing can be done until we see an end to the current regime in Russia.  It was evident before and for some time after the last presidential elections in the USA that proposals were being put forward proposing to ‘hand over’ Crimea in exchange for supposed peace in Donbas.   Such a ‘deal’, even if a commitment from Moscow could be believed, would be thoroughly unacceptable, specially given Russia’s mounting offensive against Crimean Tatars and all Ukrainians in Crimea who dare to express their views,  it is vital that Ukraine’s leaders remain vocal in upholding Ukraine’s territorial integrity and the rights of its citizens, including those suffering persecution under Russian occupation.