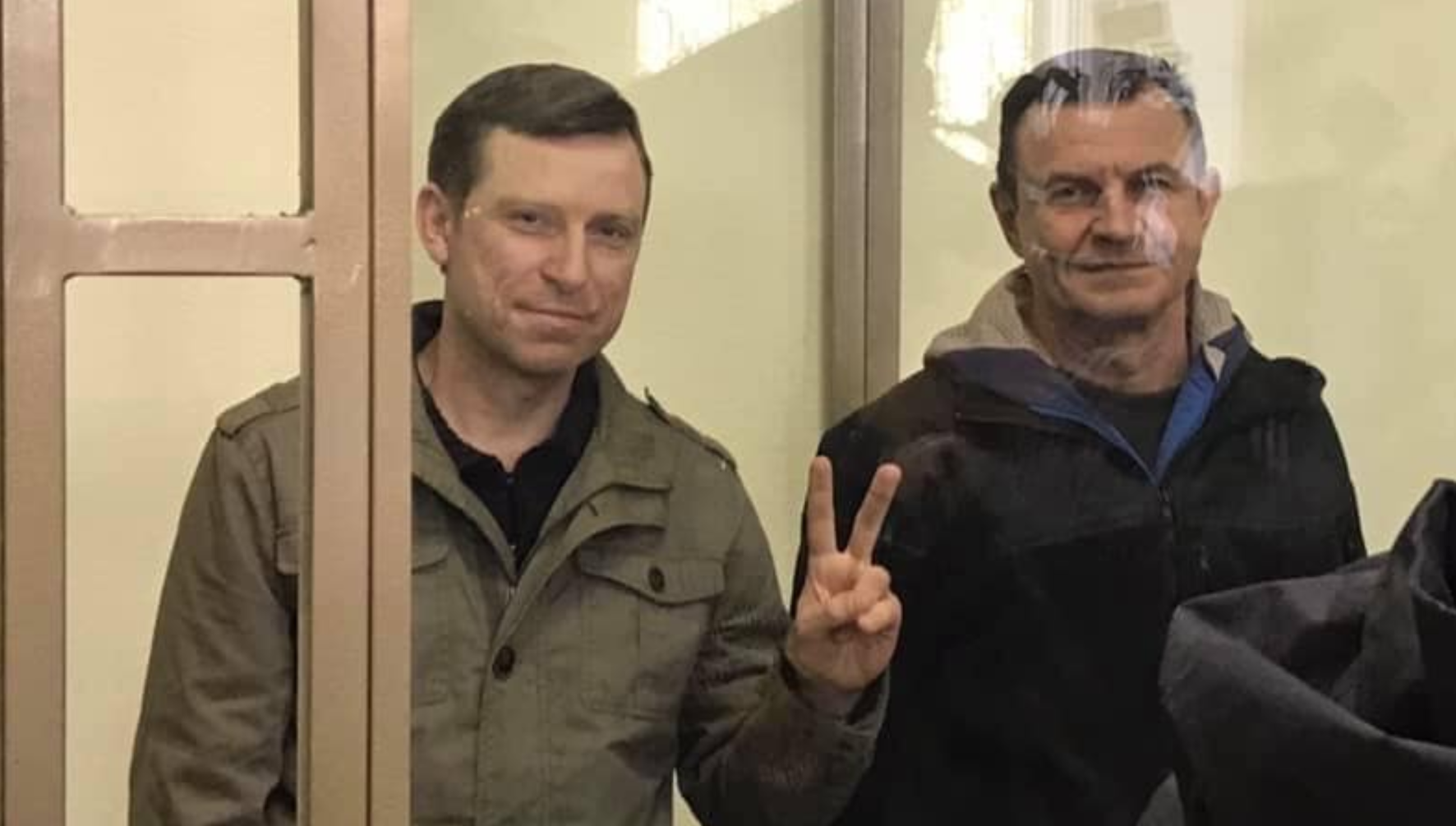 Oleksiy Bessarabov and Volodymyr Dudka have been sentenced by a Russian-controlled Sevastopol court to 14 years’ imprisonment on entirely fabricated ‘sabotage’ charges.  The sentences passed on the two recognized political prisoners were almost certainly so high because both men refused to ‘cooperate’ with the FSB.  They consistently denied all the charges, and spoke of the electric shocks used initially to torture them into ‘confessing’.

The sentence passed by the de facto Sevastopol City Court on 4 April was only very slightly lower than that demanded by the ‘prosecutor’ two days earlier.  The 14-year sentence is to be in a maximum security prison colony, with Dudka also fined 350 thousand roubles, Bessarabov – 300 thousand.   The verdict and sentences were passed by Igor Vladimirovich Kozhevnikov; Vasily Aleksandrovich Avkhimov; and Vladimir Ilych Reshetnyak.

These ‘judges’ ignored gross falsification in this case, some of which the ‘prosecutor’, Sergei Tokarev, was himself forced to acknowledge, and the lack of any evidence to back the charges against Dudka, a 54-year-old retired naval captain and 43-year-old Bessarabov, an academic.

This was Russia’s second ‘Crimean saboteur plot’ and used the FSB’s standard methods of taped ‘confessions’ extracted through torture; refusal to allow access to independent lawyers and pressure on the men to admit ‘guilt’ in exchange for shorter sentences.  All such political cases bring the FSB ‘investigators’ and others bonuses, promotion, etc. and the ‘judges’ take part by ignoring the grave flaws in the case and the men’s innocence.

On 9 November, 2016, the FSB widely circulated videos showing the arrest, search and ‘confession’ of well-known academic Dmytro Shtyblikov, and the ‘confession’ of his colleague and friend  Bessarabov.  It soon became clear that Dudka, a former Ukrainian naval captain and friend of the other two men, had also been arrested.

The FSB claimed on 10 November that an unspecified number of men had been detained as “members of a sabotage – terrorist group of the Ukrainian Defence Ministry’s Central Intelligence Department”.  They were alleged to have been planning acts of sabotage on military and other infrastructure in Crimea.  The FSB asserted that they had removed “very powerful explosive devices, weapons and ammunition, special communications devices and other significant evidence of criminal activities, including plans of the sites for the intended acts of sabotage”.

Such grandiose claims clashed with an FSB operational video, that was very wildly circulated in the Russian media, but may now have been deleted, of Shtyblikov’s arrest and the search of his home.  Instead of a stockpile or at least real weapons, viewers were shown a Ukrainian flag on the wall, a fake business card which Russian propaganda had claimed belonged to Dmytro Yarosh, former head of ‘Right Sector’, two years earlier, and ‘weapons’ which sports fans immediately identified as airguns for the game Airsoft (Strike Ball) which Shtyblikov played.

There was no evidence, only the ‘confessions’ of Shtyblikov and Bessarabov, which both men gave while under FSB control and without lawyers.  Both Bessarabov and Dudka have explained that their ‘testimony’ was extracted through torture and demanded, to no avail, that an investigation be carried out.

Shtyblikov, then 46, had been designated ‘leader’ and was subjected to particularly intense pressure.  He was effectively never allowed to see an independent lawyer, which was probably the reason why he eventually ‘cooperated’ with the FSB and was sentenced, on 16 November 2017, to five years’ imprisonment.

Both Bessarabov and Dudka, who did have lawyers, retracted all testimony given under torture and remained firm in rejecting the charges.  This led to at least one false start with the ‘case’ being sent back to the ‘prosecutor’.  It came back with the same outrageous falsifications.

As reported, supposed ‘biological traces’ from both defendants were ‘found’ on a map of the city which allegedly showed the places where the men were supposed to have been planning acts of sabotage.  An expert analysis, however, demonstrated that the traces were only on the edge of the map and not over the entire surface, which would make no sense if this were really, as asserted, a map that the men were using.

Both men previously complained that non-procedural measures had been used to obtain biological traces.  Dudka, for example, was seized on the way to the doctor where he was being treated for an ulcer.  Saliva and other samples were taken without any protocol being drawn up and without his lawyer present.  Under such circumstances, it would be easy to later use the samples to fabricate incriminating evidence.

The prosecutor only asked for the relatively minor charge of possession of a firearm to be removed, although the rigged ‘evidence’ undermined the entire case.  There was, quite simply, no evidence against any of the men.

Worth noting that two other men were also arrested shortly afterwards and tortured into giving ‘confessions’ intended to link the men to the same supposed ‘sabotage’ plot.  Oleksiy Stohniy was claimed to be an officer of Ukraine’s Military Intelligence [HUR], while Hlib Shabliy was referred to as a Ukrainian officer, a Rank 2 captain in the Ukrainian Fleet.  In those cases also the falsification was flagrant, and both men were eventually sentenced on charges that bore scarcely any relation to their ‘confessions’.  According to Sergei Legostov, Dudka’s lawyer, the only ‘testimony’ from either of these two men in the ‘trial’ of Dudka and Bessarabov was from Stohniy who said that the last time he had seen Dudka was in 2003!

Dudka’s son, Ilya, confirms that the sentences will be appealed, though in such political cases, this is unfortunately only to ensure that the men can seek justice at the European Court of Human Rights.  This ‘trial’, held behind closed doors, was a travesty, and there is nothing to suggest that justice would be found in any other Russian or Russian-controlled Crimean court.

The renowned Memorial Human Rights Centre has analysed these cases, and considers Bessarabov, Dudka, Shtyblikov; Shabliy and Stohniy to be political prisoners.