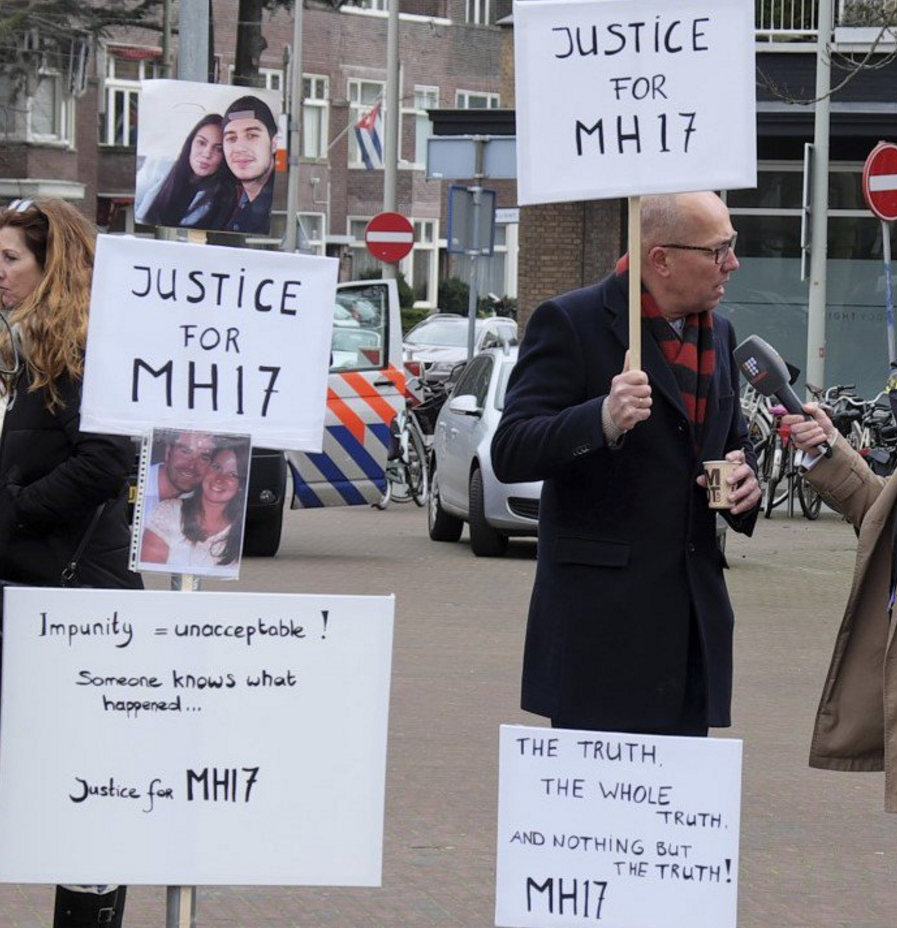 The European Court of Human Rights has requested answers from the Russian Government in connection with two claims brought against Russia over the downing of Malaysian airliner MH17 over militant-controlled parts of Donbas on 17 July 2014.  380 relatives of the 298 people who lost their lives accuse Russia of responsibility for the catastrophe, which is known to have been caused by a Russia BUK missile.  The two collective claims refer to a number of Articles of the European Convention on Human Rights, including the right to life.

Applications nos. 25714/16 and 56328/18 were lodged by Sharlene Ayley and Others against Russia, and Angline and Others against Russia, on 6 May 2016 and 23 November 2018 respectively.  The second application was lodged after the reports from the Joint Investigation Team, which did not just conclude that a BUK missile had shot down the plane but actually named the Russian military unit that it had come from.

The second is, understandably, much more detailed, but in no way conflicts with the first application. Both groups of applicants complain under Article 2 (the right to life) that Russia is responsible for the downing of flight MH17 and the death of their relatives, either directly or through the acts of Russian separatists under their control.  Article 2 also obliges governments to ensure proper, effective investigations into all deaths caused by the State or where it appears the State has failed to protect life.  The applicants accuse Russia of failing to conduct a proper investigation and to bring those responsible for the downing of MH17 to justice.. The Russian Federation also failed to cooperate with the investigations led by the Dutch Safety Board and the Joint investigation team in the Netherlands.

The second group of applicants assert also that the examples they provide of Russian failure to investigate, or active obstruction of the international investigation, should also be considered violations of several other articles of the Convention, including the prohibition of torture and ill-treatment (Article 3).

As is its practice, ECHR has communicated a brief list of questions to both parties.  There are one or two which really pertain only to whether the other articles of the Convention can be deemed applicable, and two which directly address the issue of Russian liability.

Russia is asked to give its position as to whether there has been a violation of Article 2, i.e. whether the Russian State was responsible for the deaths of 298 MH17 passengers and crew.

“Do the alleged violations of the Convention and its Protocols fall within the “jurisdiction” of the Russian Federation within the meaning of Article 1 of the Convention? In particular, did the Russian Federation exercise “authority and/or effective control” over the relevant eastern regions of Ukraine at the time of the downing of flight MH17, through their armed forces or a subordinate local administration or in collaboration with local armed forces? In this respect, what was the extent of the military and logistic Russian presence in July 2014? In addition, were agents of the Russian State involved, directly or indirectly, in the downing of flight MH17?”

Russia’s official position has been to deny any involvement in the downing of MH17. It has, both officially, and through state-controlled media and social media, proposed a large number of different ‘versions’ as to who and what was to blame, with most seeking to blame Ukraine and all attempting to absolve Russia of any responsibility.

Its answers to the Court’s questions are, in fact, likely to repeat the position cited in the ECHR document.

In point 40, for example, it is stated that “the Government of the Russian Federation have repeatedly denied any responsibility for the downing of flight MH17. They have also confirmed that no investigations are ongoing in Russia into the cause of the downing, that Russia is opposed to a special international tribunal for the MH17 case and that no Russian suspect will be extradited in that connection.”

The Court also notes that Russia has claimed to have “irrefutable data and evidence of Ukraine’s involvement in the MH17 disaster” and has criticized the Netherlands authorities claiming “that they ignored valuable information and worked on a predetermined version of events based on the view that Russia was responsible.”

JIT has indeed dismissed some of Russia’s claimed ‘evidence’, but has always provided information as to why.

In its report issued on 24 May 2018, JIT concluded that “the Buk missile which downed Malaysian airliner MH17 on 17 July 2014 came from the 53rd Anti-Aircraft Missile brigade which is a unit of the Russian army from Kursk in the Russian Federation”.

It had already stated back in September 2016 that the Buk missile which shot down MH17 came from Russia, but it now clearly identified its source as directly linked with the Russian Armed Forces.  The report states that the combination of features it studied to reach its conclusion are “so special that that can be considered as a fingerprint”.

Worth recalling that the JIT worked with all countries in one way or another involved in the MH17 disaster, and endeavoured to cooperate with Russia.  It is the latter which used its power of veto in the UN Security Council to block an international investigation into the disaster.

Russia has consistently pushed the line that any Russians found fighting in Donbas are ‘volunteers’, and has used a combination of repressive measures, threats and bribes to avoid information about soldiers fighting and / or killed in Donbas.  During the preliminary hearing into Ukraine’s suit against Russia at the UN International Court of Justice in March 2017, in part over alleged violation of the International Convention for the Suppression of the Financing of Terrorism, Russia claimed that weapons had been “found in Donbas mines”.

The question of Russian control and jurisdiction will be paramount in the ECHR case, as it is in the case before the ICJ and in the preliminary investigation still continuing at the International Criminal Court at the Hague. JIT has presented evidence demonstrating that the BUK missile was from a  Russian military unit and that the BUK missile launcher was swiftly taken back into Russia after the disaster. Russia has never tried to claim that rogues stole the missile launcher and is, on the contrary, blocking any attempts to interrogate and prosecute the people whom JIT and others have named as suspects in this case.

Russia’s response to the Court in Strasbourg is, reportedly, awaited in the autumn.