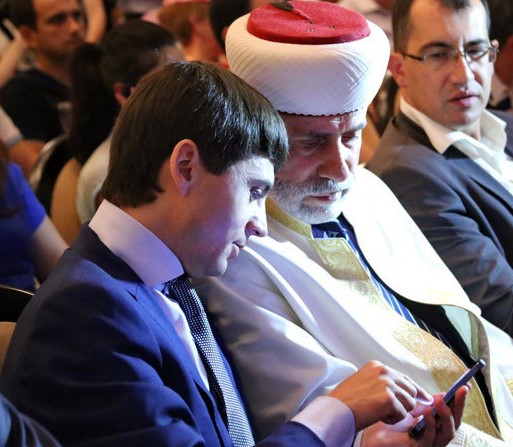 Russia has announced plans for a ‘rehabilitation centre’  in occupied Crimea to ‘re-educate’ Muslims considered to be under the influence of ‘extremist ideology’.  The move comes less than a week after the FSB stepped up its policy of terror against Crimean Tatars through the arrest of 23 civic activists and journalists, all of whom are now facing huge sentences on fundamentally flawed charges pertaining to this same ‘ideology’.

The charges of involvement in Hizb ut-Tahrir, a peaceful pan-Islamist party that is legal in Ukraine, are evidently being used as a pretext for crushing the civic initiative Crimean Solidarity and silencing those who report repression.  It is therefore profoundly disturbing that the Crimean Muftiate or Spiritual Directorate of Muslims of Crimea, should be complicit in the plans to ‘rehabilitate’ others whose views on Islam do not coincide with the official Muftiate position.

Ruslan Balbek, one of the first Crimean Tatars to have collaborated with the Russian occupation regime, reported the plan on 3 April.  He put it as follows: “To save those who have fallen into the trap of an extremist religious sect, a Centre linked with the Muftiate will be created for the rehabilitation of people who have fallen under the influence of the extremist ideology of the terrorist organization Hizb ut-Tahrir which is banned in Russia”.

There are absolutely no grounds for considering Hizb ut-Tahrir to be a terrorist organization, and the renowned Memorial Human Rights Centre for that reason recognizes all those persecuted merely for alleged involvement in the movement to be political prisoners.  In a statement demanding the release of the 23 Ukrainian Muslims seized on 27 March, Memorial HRC also pointed out that Russia is violating international law by applying its legislation in occupied Crimea and by taking all the men to Russia.

The terror is all from the side of the Russian authorities, and those who work with them.  Emirali Ablaev, Mufti of Crimea, reacted negatively to Russia’s invasion and annexation of Crimea, however several months later chose to collaborate with the occupation regime.  One of the most distressing forms of collaboration has been over political and religious persecution.  Ablaev has remained silent where his voice should have been heard in defence of political prisoners, and there is reason to believe that he has actively denounced some Ukrainian Muslims to the FSB, claiming them to be members of Hizb ut-Tahrir.

The Mufti may well not like Muslims who do not follow his official line, but he knows perfectly well that Hizb ut-Tahrir is not a terrorist organization, and that the men arrested on such charges in Crimea have never committed any crime.

Balbek suggested that those who officially renowned what he called “their former destructive political and religious views” should have criminal liability waived “after a course of psychological and spiritual rehabilitation”.  If they “repent”, he said, they should not face imprisonment.

The threat, behind such apparent ‘mercy’, in the case of those who do not “repent”, is evident. In fact, however, those viewed as religious dissidents, have long known that they are in danger.  The announcement of such a ‘rehabilitation centre’ and other attempts since the last arrests on 27 March to push claims that Russia is fighting ‘dangerous extremists’ could well also be a cover.  Russia is increasingly using such arrests as a pretext for silencing dissidents, and especially as a weapon against Crimean Solidarity.  The persecution is not for terrorism, but for reporting on the terror brought to Crimea, through armed searches, arrests and political trials.