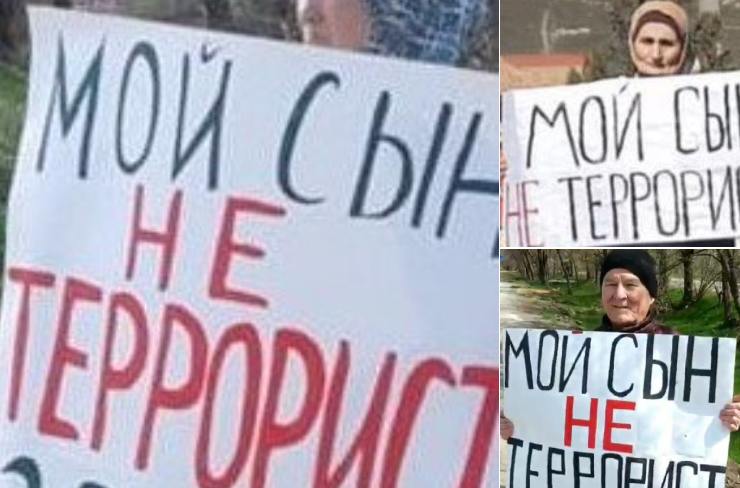 The Russian occupation regime has taken all of three days to react with detentions to the dignified protests of elderly men and women against the persecution of their sons.  On 8 April, Zarema Mamutova and her daughter-in-law Aliye, were detained in Bakhchysarai while the elderly lady stood with a placard reading: “My son is no terrorist.  Why 17 years?”.  This was the horrific sentence passed on her 43-year-old son Enver Mamutov, a recognized political prisoner, on 23 December.

Even the repressive laws on assembly which Russia is illegally imposing on occupied Crimea allow single-person pickets, yet this has not prevented multiple detentions and / or fines on fabricated charges.  In this case, Mamutov’s mother was standing alone, protesting her son’s unjust sentence, and his wife, Aliye, was streaming her protest live onto Facebook.

Russian-controlled traffic police officers arrived, with one of them walking up to Aliye Mamutova and threatening to treat this as a ‘meeting’ if she remained close to her mother-in-law.  She therefore crossed to the other side of the road,  yet the officers still took them to the police station, claiming that they were together (making it, therefore, not a single-person picket).

Lawyers immediately set off to the police station, and both women were released without any protocol, claiming a non-existent ‘infringement’, having been drawn up.

It seems likely that the detention was simply aimed at intimidation.  As mentioned, this was  at least the third such poignant protest by elderly parents in three days.

The first was on 5 April, a week after 23 civic activists and journalists, most of them from the civic initiative Crimean Solidarity, were arrested, and are now facing sentences similar to that passed against Enver Mamutov.  The mother of Ruslan Suleymanov, a Crimean Solidarity activist seized on 27 March, spent her 70th birthday standing in silence on the street with a placard reading “My son is not a terrorist”.

At least two parents followed her initiative on 8 April.  Reshat Emiruseinov’s 39-year-old son Ruslan was arrested on 14 October on the same conveyor-belt charges as the other men.  Both father and son had earlier taken part in single-person pickets protesting Russia’s abuse of ‘terrorism’ legislation against Crimean Tatars.  On 8 April, 71-year-old Reshat Emiruseinov’s placard now read “My son is not a terrorist”.

There is no terrorism, and the only terror is that imposed by the Russian occupation regime, with this increasingly directed against civic activists and journalists.

One of the many reasons why the renowned Memorial Human Rights Centre considers all those whom Russia accuses of ‘terrorism’ merely on the basis of unproven involvement in the peaceful pan-Islamist party Hizb ut-Tahrir political prisoners, is that Hizb ut-Tahrir is not known to have committed any acts of terrorism anywhere in the world.  The Russian Supreme Court has never provided any sensible explanation for its 2003 ruling, labelling Hizb ut-Tahrir ‘terrorist’, and indeed, kept the ruling secret until it was too late for it to be appealed.

Not one of the men arrested in occupied Crimea is accused of any crime, only of ‘involvement’ or ‘organizing’ a Hizb ut-Tahrir group.  Nor is any proof required to get men sentenced to 17 years for alleged involvement in an organization which is legal in Ukraine and most countries.

The arrests and ‘trial’ of Mamutov and three other Crimean Tatars from Bakhchysarai demonstrated the cynicism of all such prosecutions which are especially illegal, given that Russia has no right to apply its legislation on occupied territory.

Mamutov; Rustem Abiltarov; Zevri Abseitov and Remzi Memetov have been in custody since 12 May 2018, first in Crimea, and then in Rostov on the Don, where the Northern Caucasus Military Court convicted Mamutov of ‘organizing’ a Hizb ut-Tahrir group, and the other three men of ‘involvement’ in it.  Almost certainly because the men all refused to ‘cooperate’ with the investigators, a further monstrous charge, of  ‘planning to violently seize power’ was included.  In his final address to the court,  Mamutov stated clearly that he had been told by the ‘investigator’ that he and the other men would have the new charge added unless he agreed to admit to the other charges.

There was also no proof at all to back the claims, with the prosecution using absurd interpretations of an illicitly made tape of very poor quality and ‘secret witnesses’ who could not even describe the room in which they had sat, yet were supposedly able to remember every word of an alleged incriminating conversation.

The appeal hearing is still awaiting, though there are, unfortunately, no grounds for believing in justice from any Russian court in these cases.   Memorial HRC has declared all four men political prisoners.

More details and addresses to write to here.