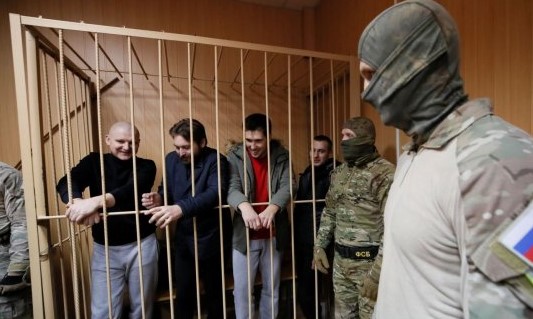 The renowned Memorial Human Rights Centre has issued an important statement in which it both confirms that the 24 Ukrainians seized by Russia on 25 November 2018 are prisoners of war and declares all of them political prisoners. Russia’s attempt to prosecute men it took prisoner as part of an international armed conflict is in flagrant breach of the Third Geneva Convention.

Memorial stresses that its assessment of the men as POWs and of the incident concurs with that taken by experts on international law.  Russia’s occupation and annexation of Crimea in 2014 is not recognized by international law, and nor are Russia’s attempts to claim that the 12-mile zone around Crimea’s shores constitutes its maritime border.   The charges laid against the men of ‘illegally crossing Russia’s state border as part of an organized group’ (paragraph 3 of Article 322 of Russia’s criminal code) have no legitimacy from the point of view of international law.  Worth noting that the Prosecutor at the International Criminal Court in the Hague has already recognized Russia’s occupation of Crimea as an international armed conflict, falling under its jurisdiction.

The UN Convention on Maritime Law, which Russia has ratified, does not allow countries to arbitrarily prohibit passage through straits to foreign vessels, and the Ukrainian-Russian agreement on cooperation in using the Sea of Azov and Kerch Strait guaranteed full freedom of passage. Since both the Convention and the agreement are part of Russian law, this means that the Ukrainian boats did not commit any offence even according to Russian legislation.

According to international humanitarian law, sailors and officers cannot face criminal prosecution merely for the fact of their part in a military conflict.  They are protected by the Third Geneva Convention on the Treatment of Prisoners of War.

Memorial HRC therefore declares all 24 men to be political prisoners.  It demands that the criminal charges be dropped and the men released, and stresses that, until their release, they should be treated in accordance with the Third Geneva Convention.

Memorial HRC has not strictly said anything new about the men’s POW status, although it undoubtedly requires more courage for a Russian human rights NGO to spell out the truth about Russian aggression and the illegality of its occupation of Crimea.  The statement focuses only on those crucial points which are so damning for Russia and, refreshingly, does not waste time on presenting the events in a ‘Ukraine alleges, Russia denies’ format.

The Parliamentary Assembly of the Council of Europe was still fairly circumspect in its Resolution on “The escalation of tensions around the Sea of Azov and the Kerch Strait and threats to European security” passed on 24 January 2019, but it did confirm that the men’s treatment must be in accordance with the Geneva Conventions, including, of course, the Third on POWs.

The Office of the UN High Commissioner for Human Rights has gone much further.  In its first quarterly report since Russia’s attack on 25 November 2018, OHCHR clearly stated that Russia is in breach of international humanitarian law and that the 24 Ukrainians seized on 25 November 2018 are prisoners of war.  This first report since the aggression, published on 11 March 2019, actually introduced a new section, entitled International Humanitarian Law violations.

OHCHR “notes that based on the provisions of international humanitarian law, the 24 detained crew members could be considered as prisoners of war and protected by the Third Geneva Convention. In any case, they shall enjoy the status of a prisoner of war until a competent tribunal determines otherwise.”

Russia is continuing to ignore this.  As well as illegally transporting them to Moscow and trying to subject them to a ‘criminal investigation’, it is also applying punitive psychiatry by forcing the men to undergo psychiatric assessments.  Both the decision to seize and then ‘prosecute’ the naval seamen and their eventual release depend solely on the political will of those in the Kremlin, and in this sense it is fitting that the Memorial Human Rights Centre should have also recognized them all as political prisoners.

The 24 men have now been imprisoned for over five months, most of that time in the Lefortovo Prison in Moscow.  A team of lawyers, coordinated by Nikolai Polozov, was organized within 15 days of the men’s seizure, with the lawyers working in coordinated fashion to prevent the Russian authorities and FSB officers from confusing and disorientating the men.  This was particularly important given that the FSB were using all kinds of pressure and depriving them of contact with their families to try to get them to confess to having committed a crime or to give testimony against the others.

They have failed, with all of the men insisting to both the investigators and the courts that they are under the protection of the Third Geneva Convention and are prisoners of war