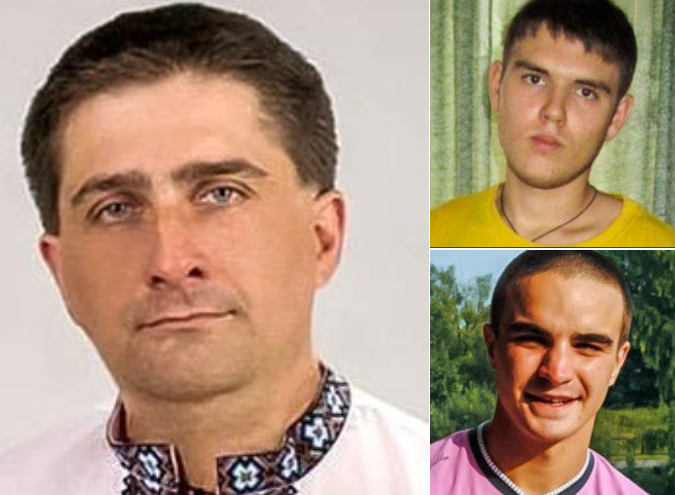 Two weeks after seizing control of Sloviansk in eastern Ukraine on 12 April 2014, Igor Girkin (Strelkov), an officer (allegedly former) of Russia’s military intelligence (GRU), claimed that his men did not want to kill Ukrainian solders whom he called “brothers”.  His interview was given nine days after the Russian-armed militants under his overall control seized Volodymyr Rybak, a Ukrainian politician defending the flag of Ukraine and two very young students, Yury Popravka and Yuri Dyakovsky.  The men’s savagely  mutilated bodies were found in a stream near Sloviansk on 19 April.

Volodymyr Rybak, a 42-year-old Horlivka City Council deputy, was seized and beaten on 17 April, after he tried to remove the flag of the self-proclaimed ‘Donetsk people’s republic’ [‘DPR’] which the Russian and pro-Russian militants had hung over the Council building and restore the Ukrainian flag to its place.   The video here shows Rybak being stopped as he tried to enter the building, pushed and beaten, before being forced into a car and taken away by masked men in camouflage gear.  Ukraine’s SBU [Security Service] believe that the order to abduct Rybak came from Igor Bezler [or ‘Bes’, [a devil]).  Bezler played a prominent role in Russia’s invasion and annexation of Crimea, and, together with Girkin, in seizing control in the Donetsk oblast.  It was Girkin, the SBU believe, who ordered that Rybak be brought to their headquarters in Sloviansk where he was doubtless tortured to death.

Both Popravka who was just 19 and Dyakovsky (25) took part in Euromaidan.  It seems that they, and three other young Maidan activists, set off from Kharkiv to Sloviansk on 16 or 17 April, hoping to gather information about the militants who had seized the city, and the checkpoints they had set up.  It was apparently a spontaneous decision which turned out fatal.  They were seized after crossing the first checkpoint.  Yuri Popravka’s body was found, together with and in the same horrific state as that of Volodymyr Rybak.  Yuri Dyakovsky’s body was found nine days later, also thrown into a river.

There was a great deal of pretence about the seizure of Sloviansk on 12 April 2014, including even a supposed ‘people’s mayor’, Vyacheslav Ponomaryov.   In April 2014, Girkin was still pretending himself. While admitting that the men had arrived with him from Crimea, he claimed that all of the men were ‘volunteers’, and two thirds of them Ukrainians.  When asked by the interviewer, he confirmed that the men did indeed have combat experience, but claimed, most unconvincingly, that “many, now already citizes of Ukraine, fought in the Russian armed forces – in Chechnya, Central Asia.  There are people who fought in Iraq and Yugoslavia as part of the Ukrainian armed forces.  There are even those who managed to be in Syria”.

His attempts to claim that their weapons are taken from the seized police building are even less plausible, but the publication Komsomolskaya Pravda is loyal to the Russian regime and knew not to ask inconvenient questions.

It was doubtless because Girkin kept to the Kremlin’s script that the earlier interview remains on the Komsomolskaya Pravda [KP] site, unlike another interview, given in January 2016.  On the later occasion, Girkin openly admitted to ordering extrajudicial killings in Donbas.  That confession to war crimes led to KP removing the interview, though copies have, of course, been retained.  No measures were taken by the Russian authorities despite a formal demand from St. Petersburg lawyer, Arkady Chaplygin that criminal proceedings be initiated against Girkin.

Girkin had been asked how they had fought looting, and answered “through executions".  He claimed that they had a ‘military court’ and imposed the legislation introduced by Soviet dictator Joseph Stalin in 1941.  A lot was made of this admission, although his aide Igor Druz had informed the BBC of killings back in August 2014.  While Girkin admitted only to killing ‘looters’, Druz was entirely open, saying that the militants had killed a number of people “to prevent chaos”.  There is a huge amount of evidence against Girkin himself, including ‘death sentences’ with his signature which were found by foreign journalists after the militants fled in early July 2014.

In the same interview, Girkin also admitted that his men had provoked the conflict in Donbas.  “The first shots, albeit in the air, were from the rebels, carried out by our unit”.

During the months that Sloviansk was under militant control, it was hard to keep up with the abductions and hostage-taking and there were a large number of cases of torture and killing as well as extrajudicial executions.  Girkin had his headquarters in the Sloviansk SBU building.  Hostages were held in the basement there, as well as in the central police building, and in both places were subjected to torture.

At least one mass grave was found after the militants fled, containing, among others, the bodies of four members of the Evangelical Church of the Transfiguration in Sloviansk abducted and tortured to death.

The Ukrainian Helsinki Human Rights Union has worked with the UK-based European Human Rights Advocacy Centre on cases before the European Court of Human Rights regarding the abduction and torture of several civilians in Sloviansk while it was under militant control.  They explain that one of the key issues for ECHR will be whether Russia can be said to have jurisdiction over Sloviansk during the period of its occupation. They have put together proof of direct involvement by Russia in the planning, carrying out and control of the invasion of the East of Ukraine in the Spring of 2014.

It remains to be seen what the Court in Strasbourg will determine.  Russia has consistently used people like Girkin, who just happened to have ‘left’ Russian military intelligence shortly before the invasion of Crimea.  When men have been caught red-handed in eastern Ukraine, Russia has claimed that they also ‘resigned’ from the military before ‘volunteering’ for Donbas. The fighters are always ‘volunteers’, never mercenaries, and there is total denial of Russia’s role in paying and training fighters.

Such denials are, of course, hollow against the weight of evidence of Russia’s direct complicity in the downing of Malaysian airliner MH17 on 17 July 2014; the video footage showing Russian military hardware and men being taken into Ukraine and the military deaths, including of close on an entire paratrooper regiment from Pskov.

Despite increasing efforts from Moscow to impose strict secrecy on its illicit military activities, information does leak out, sometimes through the openness of Russian militants, like Girkin and the neo-Nazi Alexander Zhuchkovsky whose recent book details Russian military involvement during the period of Sloviansk’s occupation (details here).

Russian historian Boris Sokolov has followed the admissions of Girkin and others involved in the fighting in Donbas.  He writes that on 12 April 2014 Girkin (whose ‘retirement’ from GRU he also questions) brought a unit of 52 Russian spetsnaz [special force] fighters into Sloviansk, and that this offensive was intended to force Ukraine’s new government to resort to force.  He believes that the Kremlin assumed that Ukraine had been so weakened, the military so undermined under the regime of President Viktor Yanukovych, that a limited contingent of heavily armed spetsnaz fighters would be sufficient.  He points out that Girkin has acknowledged that his unit passed into Donbas via Russia, something it could not have done had they not been waging the offensive at the Kremlin’s orders.

Russian President Vladimir Putin miscalculated badly.  Ukraine did fight back and Girkin’s men were, in July, forced to retreat from Sloviansk.  It was soon after this that  Russia brought in military forces, and its first military losses were reported.

Sokolov has made his own estimates, based on demographic data, which he believes indicates that as many as 32.5 thousand Russian ‘volunteers’ (presumably including mercenaries) and military servicemen were killed in Donbas just in 2014-2015.  He estimates that no more than two thousand of that number were military men.

This figure is not far off that given in April 2017 by Valentina Melnykova, Head of the Union of Russian Soldiers’ Mothers Committees.  She estimated then that no less than 1500 Russian military servicemen had died in Donbas, but noted that this was the first war she was aware of where the families of young men killed were not approaching the committees for help.  The reasons have been reported here, and seemingly include some degree of bribery for silence and threats.