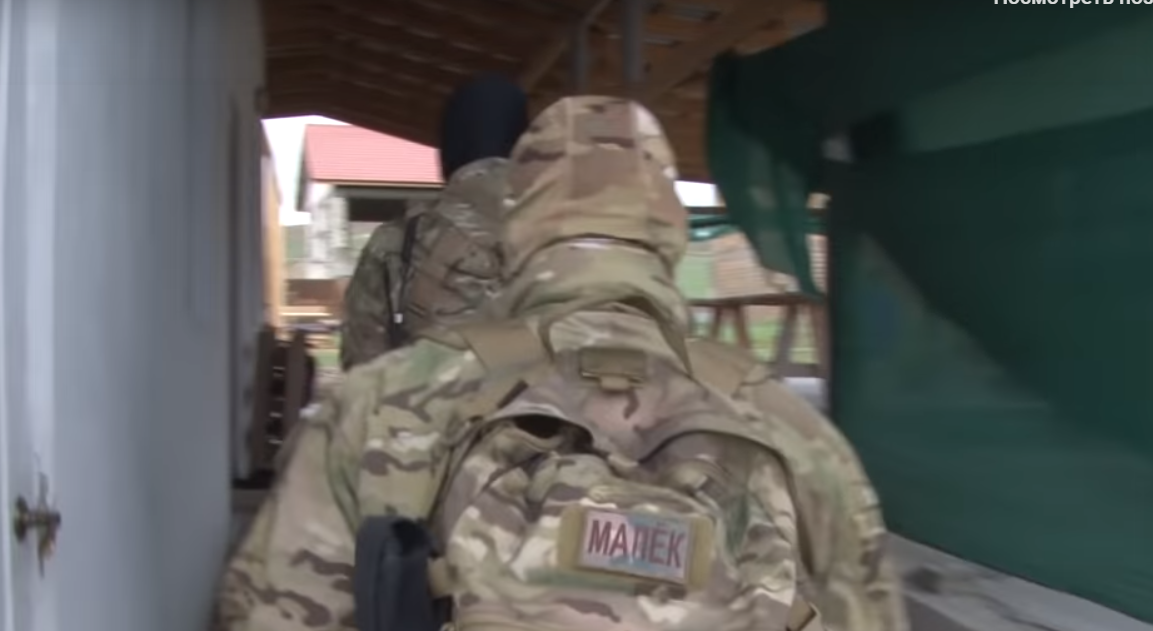 Armed searches of both a mosque and the home of the Imam were carried out on 15 April in the Balaclava region of occupied Crimea, with the Imam, Rustem Abilev arrested on charges of making ‘calls to extremist activities’.  Russia’s abuse of ‘extremism’ legislation is notorious, and suspicions about this ‘operation’ are only exacerbated by the fact that the FSB and other enforcement officers appear to have been accompanied by several Russian and Russian-controlled TV channels.

All such channels later cited the FSB in calling the Imam a person born in Uzbekistan.  This was probably to avoid admitting to the arrest of yet another Crimean Tatar, just two weeks after a major offensive against the civic initiative Crimean Solidarity and arrests of 23 Crimean Tatar activists and civic journalists.  Most of them could also be described as ‘people born in Uzbekistan’ where Crimean Tatars lived in exile after the 1944 Deportation.

The FSB claims that the arrested man “is the leader of a group of radical Islamists who gave sermons in one of Sevastopol’s religious institutions with the use of prohibited literature, in which he called to violent actions in relation to people who do not share his religious views”.   During closed sessions he is alleged to have ideologically worked on believers, “drawing new members into extremist activities”.

FSB assertions after the arrests of Ukrainian citizens must always be treated with caution, and here the claims are essentially contradicted by the charges which, by Russian standards, are fairly mild.  Paragraph 1 of Article 280 of Russia’s criminal code which it is illegally applying in Crimea punishes for something termed “public calls to carry out extremist activities”.  It envisages a penalty from up to a steep fine to a maximum 3-year prison sentence.  Given that 55 totally law-abiding Crimean Muslims are currently facing up to life imprisonment on ‘terrorism’ charges based solely on allegations of involvement in the peaceful Hizb ut-Tahrir movement which is legal in Ukraine, it seems likely that the allegations of ‘calls to violence’ against Abilev were for the propaganda media and may well be quietly shelved.

Abilev is a dentist with his own surgery.  He is married and his wife is seemingly expecting their first child.  Crimean Solidarity activists who went to the village of Shtormove (near Sevastopol) spoke with a local resident who had only praise for Abilev and called the charges against him yet another attempt to intimidate the Crimean Tatar people.

This is at least the fourth time since Russia’s invasion and annexation, that an armed search has been carried out of a mosque in occupied Crimea.

During the last hunt at the Mosque / Muslim Cultural Centre Sozidanye [Creation] in Simferopol for ‘prohibited literature’, the armed and masked men ‘found’ it – this time with insulting disregard for Muslim practice, near a toilet.

With respect to such charges, Vitaly Ponomaryov, a senior analyst for the Memorial Human Rights Centre, notes that Russia has used anti-extremism legislation to launch “a conveyor belt of political repression where you can be sentenced on the basis of spurious cases which have little in common with reality”. This conveyor belt “until it’s stopped, will demand more and more victims”.

This Ukrainian Muslims have learned at first hand.  As mentioned, 55 men have been arrested since January 2015 on charges of ‘involvement’ in Hizb ut-Tahrir, with the charges not based on any crimes that the men are believed to have committed, nor even of substantiated charges against Hizb ut-Tahrir itself.  ‘Proof’ in such cases is often provided by ‘secret witnesses’ and extremely questionable ‘expert assessments’.  Four men have thus far been prosecuted for involvement (which they did not deny) in the equally peaceful Tablighi Jamaat movement, which Russia has, just as arbitrarily, called ‘extremist’.