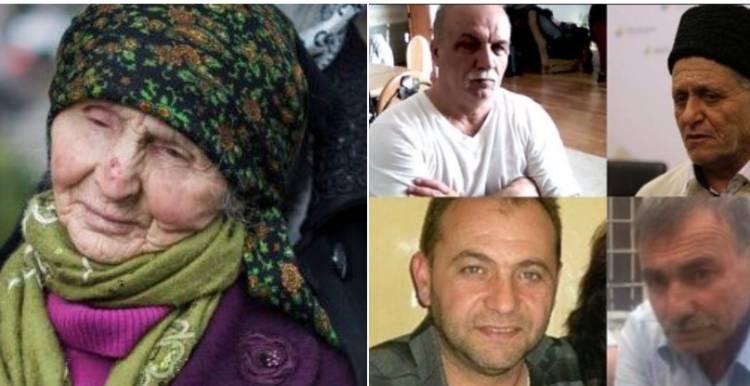 A Russian-controlled court in Crimea has passed long suspended sentences on four Crimean Tatars in their fifties and sixties despite an earlier court ruling having confirmed that there were never any grounds for their arrest, imprisonment and ‘trial’ at all.  The Russian FSB ‘operation’ that also caused the death of 83-year-old Vedzhie Kashka, a world-renowned veteran of the Crimean Tatar national movement, was from the outset based on a lie.

The sentences passed came five days after the Simferopol District Court on 12 April fully allowed a suit lodged by lawyer Mammet Mambetov on behalf of the Kashka family against Turkish national Yusuf Aitan.  The latter was ordered to repay seven thousand dollars which he had borrowed from Vedzhie Kashka and had refused to repay.

It would be impossible to overstate the importance of the 12 April ruling.  The money was used by the FSB as the pretext for the attempted arrest of an 83-year-old woman in ill health on 23 November 2017, which directly caused her death.  It was claimed, solely on the testimony of Aitan himself, that Vedzhie Kashka, together with Asan Chapukh (now 65); Bekir Degermendzhy (58); Kyazim Ametov (61) and Ruslan Trubach (53), had been trying to ‘extort’ the money from Aitan.

The order that Aitan return the Kashka family’s money came shortly after the prosecutor in the ‘trial’ of the four men demanded a suspended sentence of three and a half years for Chapukh and 3-year suspended sentences for the other men.  In all cases, the suspended sentences were to be with a three-year probation term. This is exactly what ‘judge’ Mikhail Belousov  from the Kievsky District Court in Simferopol handed down on 17 April, despite the fact that a court had established the lack of any extortion, and had ordered that Aitan return the money that he had effectively stolen.

There was every reason for the 12 April ruling.  The insistence from the Kashka family and the defendants that they had been trying to get Aitan to return money that was not his was confirmed by witnesses.  It was also backed by the piece of paper confirming receipt of the loan which Aitan had himself signed.

Both Aitan and the prosecution tried to explain away this receipt, claiming that it had been given “under pressure”.   As well as the difference in age, two of the men – Chapukh and Degermendzhy – were in very poor health, making their alleged threats of physical reprisals as the supposed reason for the document highly implausible.  They had also purportedly taken the documents for his car away though, again, it is unclear why he allowed this.

Aitan himself, who is believed by the Kashka family and the defence, to have been a petty crook who tricked women into marrying him, gave extremely contradictory testimony during the trial.  He asserted, variously, that the men had threatened him with deportation from Crimea; to cut out his kidney; to kill him, and to sell him into slavery.  Although he allegedly took all such ‘threats’ seriously, he saw no problem in leaving his car at the Kashka home and only picking it up a month after the supposed ‘extortion’.

This squalid prosecution began with a large, and rather violent, operation on 23 November 2017, in which the FSB, together with Rosgvardia and other enforcement officers, almost certainly used excessive force during the attempt to arrest Vedzhie Kashka, with the real cause of her death minutes later still unclear. Even if the physical marks on the 83-year-old’s body were caused by resuscitation efforts in the ambulance where she died, the fact that all video footage of her arrest was removed suggests that the officers have a lot to hide.

The disappearance of this video is all the more suspicion given the huge amount of coverage on Russian and Russian-controlled propaganda channels of two of the men being forced to the ground and handcuffed.

The four men, all of whom have been active in defending political prisoners since annexation and in the Crimean Tatar national movement, were taken into custody.

The ‘operation’ came six months after the UN’s International Court of Justice had ordered Russia to revoke its ban on the Mejlis, or representative assembly, of the Crimean Tatar people.  Russia has refused to do this, and it was evident from the wide coverage given to the arrests of the men, and the unsubstantiated claims made, that the aim was to (inaccurately) link the men with the Mejlis in an attempt to discredit the latter.

All four men were held in custody for well over a year, despite the fact that Degermendzhy’s severe asthma meant he should not be in detention at all, and Chapukh had suffered a mini-stroke shortly after his arrest.  All were held in the Simferopol SIZO [remand prison] where the conditions are tantamount to torture even for men in good health. Chapukh had lost control of one side of his body, was unable to speak and was totally dependent on cellmates, yet was only finally released under house arrest when it became obvious even to the FSB that he could die at any moment. Degermendzhy’s asthma became so acute that he needed to be admitted to an emergency ward.  He was held there under guard, and his wife was prevented from seeing him.  He was moved, as soon as his condition stabilized, supposedly to a normal ward, though in fact to the corridor outside the ward, and then back to the SIZO.  During at least one of the ‘detention hearings’, Degermendzhy needed to sit with an oxygen mask on, yet the ‘judge’ still remanded him in custody for a further two months.

The men will remain under house arrest until after the appeal hearing.  Judging by the extraordinary irregularities thus far, and the fact that Belousov did not even let Trubach give his final address on 17 April, saying that Trubach’s words about his innocence were “of no importance”, there seems little hope of justice in any court under Russian control.