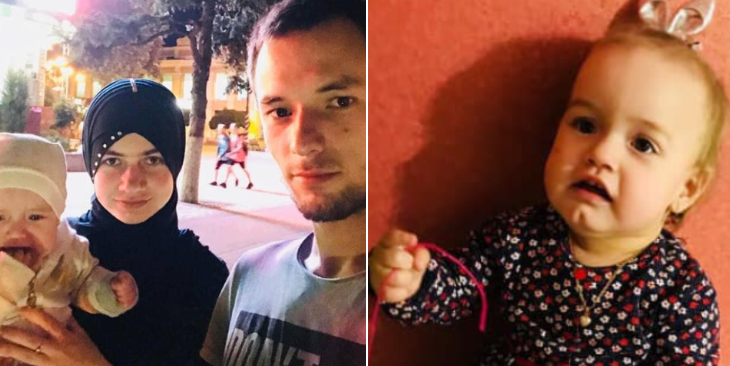 Another Crimean Tatar activist was arrested on 17 April, bringing the number of activists, most of them from the Crimean Solidarity civic initiative, whom the Russian occupation regime has taken prisoner over the last month to at least 24 (possibly 25, since the whereabouts of Edem Yayachikov remain unclear). Russia’s ferocious offensive against activists reporting on human rights abuse in Crimea has also increased to 168 the number of Russia’s youngest victims, the children whose fathers have been taken from them by masked men waving machine guns.

Rayim Aivazov, who is from Kamenka in the Simferopol district, has been involved in organizing parcels of food and other supplies to the many Crimean political prisoners held in the Russian city of Rostov-on-Don. He and his wife, Mavile, have a daughter who is a year and a half old, and Mavile is expecting their second child.

Aivazov was detained on 17 April while crossing the administrative border between mainland Ukraine and occupied Crimea.  All contact was lost for several hours and this family had already reported on the FSB hotline that he had been abducted.  He was finally allowed to contact his sister at 14.30 and told her that he had been detained by the FSB.  He said that the latter are charging him with supposed ‘involvement’ in the peaceful Hizb ut-Tahrir party which is legal in Ukraine, but which Russia has labelled ‘terrorist’ without providing any explanation.  The charge under Article 205.5 § 2 of Russia’s criminal code carries a sentence of 10-20 years’ imprisonment, with no actual crime required, nor indeed any real proof of involvement in Hizb ut-Tahrir.

The renowned Memorial Human Rights Centre considers all Russians convicted merely of involvement in Hizb ut-Tahrir to be political prisoners.  With respect to Ukrainian Muslims in occupied Crimea, Memorial has seen no reason to await sentences since Russia is also in grave breach of international law by applying its legislation on occupied territory.

Over the last year and a year, Russia has been using Hizb ut-Tahrir charges as a weapon against Crimean Solidarity which not only helps political prisoners and their families, but also ensures that information is circulated about the armed searches, arrests and politically-motivated prosecutions that Russia has brought to Crimea. The most flagrant were the arrests on 27 March this year of 23 Crimean Tatar civic activists and journalists.  Aizanov is now facing charges together with these men, all of whom were hurriedly and illegally taken to the Rostov oblast in Russia, without their families being given a chance to say goodbye and without their lawyers being informed.

The sharp increase in the scale of repression since early February this year has shattered the lives of very many Crimean Tatar families, with children traumatized by the violent intrusion into their homes of masked and armed men and the loss of their fathers.  Even without fears of new arrests, the number as it stands now, of 168, is set to rise as two or more women are shortly due to give birth.

Crimean Tatars have rallied around as much as they could with the initiative Bizim Balalar [Our Children] providing a small monthly amount for each of the ever-increasing number of children of political prisoners, as well as important art therapy for children profoundly traumatized by the tragedy that had befallen their family and various children’s activities.

Even before the last arrests added nearly 60 children in need of help, prominent journalist Lilia Budzhurova had reported that they were increasingly experiencing difficulty in maintaining the monthly assistance for families.  Money is being collected in mainland Ukraine, but Bizim Balalar is, unfortunately, unable to open accounts in foreign currency given the likelihood that Russia will use them as a pretext for claiming the initiative to be a ‘foreign agent’, with all the pressure and restrictions that would entail (see below for ways to donate).

Another important initiative, entitled ‘Crimean Childhood’ was begun by Mumine Salieva, a human rights activist and herself the wife of a political prisoner, Seiran Saliev. Mumine explains that it is simply imbedded in Crimean Tatar tradition that there are no children who are not ours.  Each month, the children are taken on excursions and other activities.

Meryem Kuku’s human rights activist husband, Emir-Usein Kuku, says that when the armed officers arrive for a search “they already come with the sentence”.  For children, this is not simply a shock, but their world turned upside down.  You think it must get better, she says, but it only gets more difficult.

It was Kuku’s arrest in February that finally jolted international NGOs and others into reacting to these ‘Hizb ut-Tahrir’ prosecutions.  Kuku had already faced persecution, including an apparent abduction attempt which only turned into an ‘FSB search’ after passers-by reacted to his cries for help.  Kuku has been recognized by Amnesty International as a prisoner of conscience.

In fact all of those whom Russia is imprisoning on spurious charges linked with Hizb ut-Tahrir are essentially persecuted for their religious beliefs, while an ever-increasing number have clearly been targeted because of their civic activist or journalism.

All are in need of our voices in their defence, and their children – our help.

Unfortunately, the account which Bizim Balalar (Our Children) gives is probably only available to those living in Russia or occupied Crimea.

The card number is

The accounts opened by Shevket Namatullaev, a presenter on the Crimean Tatar ATR.ua  TV channel are still collecting donations.  Money in Ukrainian hryvnya can be paid to the PrivatBank card 4149 4390 0416 6017  or, in dollars, to 4149 4991 1754 9103.  Namutullaev writes that donations from abroad can be made via Western Union, and asks that people contact him via Facebook for details.